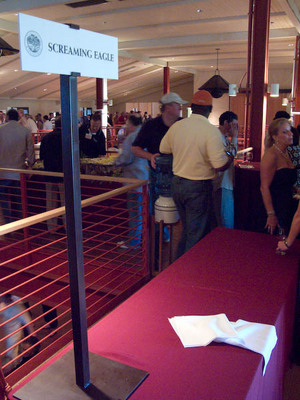 The danger of a post such as this will be the fact that some of you, and perhaps the people concerned, will believe that I am simply whining. But let me assure you, though I am slightly disappointed, I am far more astonished at what seems to me to be a level of rudeness and arrogance that is thankfully rare in the wine world.

Monday afternoon, April 28th, the Oakville Winegrowers Association put on a tasting of wines grown and made in Napa’s Oakville AVA (American Viticultural Area) for the trade and the media. Such tastings are quite rare for many reasons, but perhaps among them is the fact that many of the wineries in Oakville are quite simply the top wineries in Napa. These folks don’t have any problem selling their wines out every year for hundreds of dollars per bottle. Needless to say, they don’t have a lot of extra wine laying around for tasting. Many do not have public tasting rooms at all for this very reason.

However, most of these wineries, like the vast majority of their peers in Napa understand that their relationship with the trade (retailers, restaurateurs, distributors, the press) is important both for their own livelihood as well as the livelihood of the wine region as a whole. Which means that every once in a while they get together and throw a big tasting to allow members of the trade and media access to their hard-to-find wines in a comparative and easily accessible setting.

The Oakville tasting this week represented a fabulous opportunity to taste some legendary wines from some of Napa’s best producers. Among them was Screaming Eagle, the cult wine of cult wines. This small producer is widely known for making some of the highest rated, most expensive, and hardest to get wine in America.

Frankly when I saw that Screaming Eagle would be pouring at the tasting, my first reaction was surprise, since I had never heard of them pouring their wines at such a large trade event. My second reaction was a warm feeling of approval. I was proud that they were going to support their appellation and their fellow winegrowers, and I was personally looking forward to tasting the wine for the first time.

But I never got to. And neither did hundreds of other members of the trade and media.

After about 20 minutes of pouring at the tasting, having only brought a few bottles, Screaming Eagle was out of wine. So when I arrived to the tasting about 30 minutes late, I found this:

An empty table, surrounded by stunned members of the wine community — winemakers, wine buyers, sommeliers, marketing consultants, and other winery owners, all of whom were nonplussed at the blank table. Actually, not all of them were nonplussed. Some of them were pissed.

Now you might be thinking, well, they ARE the ultimate cult winery. They don’t make a lot of wine, and their wine is so expensive, they can’t really afford to just stand around and pour their wine all day long at this tasting.

To which I say: tell that to the following wineries, all of whom poured their wines for nearly three hours to everyone who wanted it at the tasting:

The first people I ran into when I got to the tasting were a couple of winemakers I know who make wine elsewhere in the valley. They were leaving the tasting and told me that they had gotten to the tasting right when it started, and they still hadn’t gotten a chance to taste the Screaming Eagle. They were shaking their heads in amazement.

So what is the point of all this?

The point is that there are wineries who understand that they’re part of a community, and behave as such. And then there are those who don’t.

I can’t tell you how many tastings for both the trade and the public I have been to where Bill Harlan and Bob Levy are pouring the Harlan and Bond wines for all comers. There is no economic reason for such wineries to appear at these events. Most of the people who taste their wines in these settings will never be able to get their hands on a bottle anyway. Yet they are there, because they are supporting their industry, their appellation, and the trade itself.

For Screaming Eagle to agree to participate in this tasting and then to show up with only enough wine to last 20 minutes is just downright rude to the point of being offensive. It says very clearly that they pretty much don’t give a damn about anyone.

That’s fine, of course. It’s their prerogative. But I find it quite ironic that for two hours after they abandoned their table, the two folks who came to pour Screaming Eagle were still wandering around, tasting everyone else’s wines, almost none of which ran out until nearly three hours into the event.

Shame. I’m sure I’ll taste Screaming Eagle someday, but I wonder if it will ever be able to overcome this bad taste I have in my mouth?