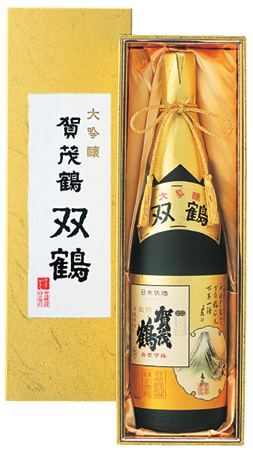 One of the fascinating and attractive things about sake breweries are their (usually) much longer and storied histories than the wineries of the western world. While there are a few wineries that have been in existence for a few hundred years, there are many more sake breweries that have been doing their thing for many hundreds, some continuously operated by a single family.

Kamotsuru Shuzo may not be one of the oldest breweries in Japan, as it can only trace its history back to 1623, and really only began production under the Kamotsuru name in 1873, but it is one of the most respected.

The company’s name, like so many in Japanese, benefits from a clever double meaning. Kamo is both a reference to a chain of mountains from which the brewery gets its water, and Kamo(su) is also the verb to make sake. The second half of the company’s name, Tsuru, means “crane,” a noble and very auspicious bird for the Japanese culture.

When it comes to kamosu, Kamotsuru represents an odd dichotomy between technological innovation and strict tradition. In many ways Kamotsuru can be considered one of the most pioneering sake breweries in Japan. They claim many firsts in the world of sake including being one of the first Japanese breweries to export sake to the United States in the year 1896. Don’t ask me who might have been drinking sake in the U.S. at that time. Perhaps more notably, Kamotsuru brewery can claim to be the co-inventor of the modern rice polishing mill in 1898, along with another company. In 1905 were among the first breweries in Japan to produce ginjo class sakes, whose rice had been polished to at least 60% of its former mass, and in 1958 they claim to be the first brewery to produce a daiginjo class sake (made from rice polished to less than 50% of its former mass).

Today, despite such a history of innovation, a visitor to Kamotsuru might be struck by the seemingly traditional approach taken towards sake brewing. Kamotsuru still makes use of wood where many have switched to stainless steel, and continues many of the labor intensive manual processes of sake making that have been automated by other breweries. And, of course, the brewery insists on producing incredibly high quality sake, of which this sake, named “Sokaku” is their second most premium product, and the highest quality sake that they export to the United States.

Sokaku is a daiginjo sake. This means that the rice has been polished past the 50% point. In fact, as a mark of its premium quality, the rice used to make Sokaku has been polished to 38% of its former mass, a delicate and expensive feat, and one that the brewery feels makes for a more refined and delicate brew. It is made in the dead of winter in Hiroshima prefecture as the snow blows in cold from the sea of Japan.

While it’s easy to buy sake by the label (many of them are quite attractive, and when you don’t have any idea what they’re saying — I don’t — it can be an interesting aesthetic gamble) it’s generally best to know what you’re getting yourself into. However, it is worth noting that this sake rates pretty high up on the aesthetic scale. Anyone who could receive this individually gold boxed, hand tied, handmade-paper-labeled bottle and not be impressed probably isn’t worth having as a friend anyway.

Tasting Notes:
Colorless in the glass, this sake has a nose of white flowers, dried orange rind, tropical fruits, and wet stones. In the mouth it is ever-so-smooth, with clear stony, rainwater and floral qualities wrapped in a slightly creamy, melted vanilla ice cream jacket with hints of wet cedar on the finish. The sake conveys a purity that marks the best daiginjo sakes along with a silky weight on the tongue that entices sipping again and again. World class.

Food Pairing:
This sake seems like it would do beautifully with butter poached fish of any kind, but especially…butter fish! A nice filet, a splash of lemon and a glass of Sokaku could make any evening spectacular.