Book Review: Passion on the Vine by Sergio Esposito 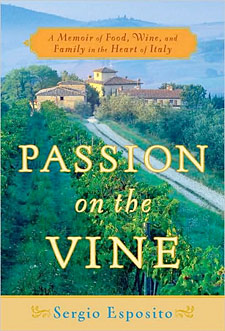 There are stories that are meant to be true and stories that are intended to stir one’s enthusiasm. In reading Sergio Esposito’s highly engaging Passion on the Vine: A Memoir of Food, Wine, and Family in the Heart of Italy, how can you not want to have your very own Neapolitan family? While some of the anecdotes may not be the gospel truth, the book follows in the tradition of the Neapolitan, who are known as the story tellers of Italy. An extra pinch of salt, one more clove of garlic, and what does it matter, when the tales transport you to an Italy that is so full of gusto?

Much more than a memoir or a wine book, this is a rambling jaunt through place and memory from Sergio Esposito, the founder of the Italian Wine Merchant in New York. It reads like an archetypical Southern Italian emigrant’s journey. Sergio, in his short time on earth, has harnessed the energy of a history that is bigger than one family. It is the story of countless Italian families who came from an almost impossible chasm in society to the promise of the New World.

Personality-driven books can sometimes sound like a laundry list of memories that seem important only to the raconteur. But Sergio’s stories take on a transformational tone, no doubt due to the power of the story, but also the skill of his co-author, Justine Van Der Leun. It takes a special artistry to draw his stories out so skillfully.

When he tells you about his mother and his childhood and his Naples, it reads like a story from 100 years ago, but is as fresh as the vegetables from the family garden. I have been absorbing this book for a month or so. It digested well; in fact, it seems that some of his memories and mine have merged.

I, too, wanted my mom to be this sensual life-force from whence all things spring. Sergio’s mother represents all our moms and sisters and aunts, in the sense that the story is bigger than one person. But the way he frames her life, it’s like reading from a book of ancient southern Italian history, which is strong with the cult of the female, from Aphrodite to Diana to the Blessed Virgin Mary. It oozes from the soil of Campania.

At one point, Sergio word-tangos with his fantasy of winemaker Enrico Scavino’s daughter, Enrica. I remember her as a young child. So to hear him (a married man) refer to her with a lusty gleam in his tone put me a little off balance. But then, I remembered we were in the middle of one man’s story of his life, his passion and maybe a little unrequited longing. The beauty of a woman can often bring a man to reveal furtive infatuations. Not a mortal sin, just a human tendency to fall for the ever-present beauty and charms of Italy and her creations.

A master sommelier once told me that he thought there were only about 100 jobs in the wine industry worth having. Sergio has one of them, no doubt, with his freedom to travel for extended periods of time, gathering wine and friends and stories. Storytellers like Sergio are vital, for they go out into the world and do what most of us cannot: have experiences worth telling stories about.

Sergio understands we are dealing with more than mere mortals in the chronicle of Italy and her wine.

After all, wine was created by the gods, so it would only be fitting that modern-day deities redefine the role of the fermented juice. And whether he focuses on an eccentric prince who makes an unlikely white wine near Rome or a cantankerous winemaker in Montalcino who is absolute with regards to his superiority in making Brunello, Sergio delivers the visceral side of an earthbound divinity.

Other modern-day giants, from Bartolo Mascarello to Josko Gravner, are unmasked and left to dazzle us with their light and their inspiration. In that mode, Sergio takes on the respectful mantle of reminiscence in the manner of a younger Burton Anderson or Victor Hazan.

Like another personality in the book, Lou Iacucci, a predecessor from the 1980’s whom he never met, Sergio has helped to place Italian wine among the great wines of the world. His Italian Wine Merchant store in NY is a rocking momentum machine, bringing many of the great Italian wines into the American experience.

And just as Sergio and his family stepped onto this soil with hopes and dreams, so now he ushers many wines and winemakers across the threshold of a dog-eat-dog world of commerce and competition into his cozy little kitchen with warm colors and familiars aromas and a comfort in being Italian and ready for whatever the world has in store.

This book reads like it was written by an older man in his 60s. So how is it this young man, barely 40, has produced such a tome? Beginners luck, or tales well spun from the tradition of his Naples? Either way, he is true to his roots, mixing favola with the tavola and laying out a great spread of Italian joy.

Alfonso Cevola is the Italian Wine Director for the Glazer’s family of companies, based out of Dallas, Texas. Alfonso is a Certified Specialist in Wine and a Special Contributor to the Dallas Morning News, The Well Fed Network and The Sommelier Journal. His wine blog is On the Wine Trail in Italy, posting every Wednesday, Friday and Sunday.