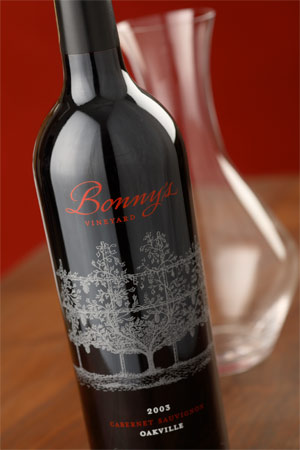 Heritage plays out in many ways in the Napa Valley. There are only a few remaining families that have been farming in the valley since Prohibition, and even those that have tenures lasting more than three decades are increasingly being supplanted by new blood or corporate interests.

Some of those families that have left the valley after decades often move on to other enterprises after cashing out on their vineyard investments. However, it’s tough to abandon Napa Valley once you’ve lived and loved there for so long.

Winemaker Justin Meyer moved his family to the Anderson Valley in 1999 after more than 35 years of making wine in Napa Valley with a vision of producing world-class Port-style wine and establishing a family estate that could be carried on by future generations. Despite this move, the family never truly left Napa, as it continued (and still continues) to farm the same vineyard that in some ways is responsible for the fate of the entire Meyer clan.

Justin Meyer was one of the great icons of the modern California wine industry and one of its greatest success stories. Meyer thought he was destined for a life of prayer and service when he joined the Christian Brothers religious order in the late 1950’s, but a twist of fate led to him being sent to work at the order’s winery in Napa in 1964. That fateful move was the beginning of a forty-year career in the wine industry. After working for several years at Christian Brothers with the famous Brother Timothy, he left the order to marry a woman named Bonny that he had fallen in love with, and with literally a dollar to his name, he co-founded a little winery that he and partner Ray Duncan decided to call Silver Oak. The rest, as they say, is history. Justin spent 28 years at Silver Oak and built it into one of the world’s most sought-after wine brands.

During that time, Meyer, who was a lover of Port, purchased some bulk tawny port on the market and started to make small batches of the stuff under a new label: Meyer Family Cellars. The port was for friends and family, and was also sold in small quantities at the Silver Oak winery to those in the know.

During this time, Meyer raised a family with Bonny, whose name was also applied to a piece of vineyard land adjacent to Conn Creek that Meyer purchased for his wife in 1974.

From an early age, this couple’s son Matt Meyer knew that he wanted to be a winemaker and winegrower like his father. Unlike in his father’s day, the way to do that was pretty straightforward for Matt, who went to U.C. Davis for a degree in Viticulture, and then began working immediately with his father on turning the family winery into something more than just a little port hobby.

The family purchased vineyards in the Yorkville Highlands in 1999 and planted Syrah. Justin Meyer passed away in 2002, leaving the winery under the direction of Matt and his new wife, Karen, a winemaker whom he met while working a harvest in New Zealand in 2004. While their primary focus was growing a business and a brand in the Yorkville highlands, the family took special care to maintain the vineyard from which Meyer had made some of the most famous single vineyard wines for Silver Oak (and for Napa Valley) for more than a decade (1979-1991).

As Meyer Family Cellars gradually settled into a working rhythm and predictable operations, the family decided that the time had come to produce a wine that would honor in equal parts Justin and his wife Bonny — him with a world-class Cabernet, her with the honor of being its namesake. Bonny’s Vineyard last produced a wine in 1991. Since then the family continued to farm it, and completely replanted the vineyard in 1999, making the first harvest of new fruit and inaugurating this project in 2003, the first time that the vineyard has produced a wine in 12 years.

Harvested in mid-September (notably early for Oakville) the grapes for this wine were selected from small bunches of even smaller berries, and destemmed before being crushed. After a day of soaking at cold temperatures to extract color and flavors from the skins, the grapes and juice began fermentation which lasted 10 days before the wine was pressed. It completed its primary and then secondary fermentations in stainless steel before being moved to 100% new American Oak barrels where it aged for a lengthy 34 months before bottling. During that time it was racked once a year (the process where the wine is carefully poured off the sediments that have accumulated in the barrel). The wine was not fined, but was filtered before bottling.

If the pedigree of this wine is not enough to pique a wine lovers interest, two salient facts about its winemaking should gain the attention of those serious about California Cabernet. The first is the daring choice to age the wine in only American Oak, a practice which is increasingly rare in California, and even more so in Napa Valley. The second is the fact that this wine weighs in at only 13.19% alcohol, which, like the choice of oak, is neither good nor bad in itself, but is certainly even more uncommon for Napa Cabernet.

Which brings me to the bottom line on this wine. Those looking for a wine that defies the stereotypes of Napa Cabernet while at the same time upholding its reputation for being some of the tastiest wine on the planet shouldn’t miss their chance to experience the first example of what will likely be a highly sought after wine.

Tasting Notes:
Dark garnet in the glass, this wine has a nose of luxurious chocolate and cherry aromas. In the mouth it is nothing short of gorgeous. Beautifully smooth and lithe on the tongue, the wine swirls with great acidity that carries flavors of cherry, mint, chocolate, cedar and tobacco across the palate in several waves of pleasurable, layered flavors. The finish soars off the back of the palate effortlessly and endlessly. An incredibly impressive first release that Justin Meyer could not help but be proud of.

Food Pairing:
This wine epitomizes the concept of delicate strength, which means it’s rich enough for grilled lamb on rosemary skewers, but not likely to overwhelm more subtle dishes either. A very nice food wine.

This wine is being released on August 31st in limited quantities, and I believe it will likely only be available to members of the winery’s mailing list. You can sign up on their web site to purchase up to three bottles.