Book Review: The Geography of Wine by Brian J. Sommers 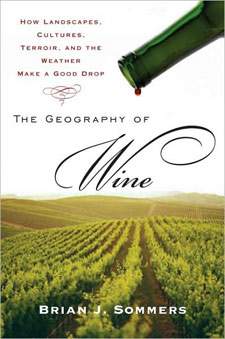 This is a very useful, though not very exciting book. No rhapsodies about mind-bending encounters with memorable wines, no personality portraits of wild and crazy winemakers, no dirt on the owners of winedom’s most precious pieces of dirt.

But dirt, yes–the kind geographers start from and worry over. Brian Sommers teaches geography at Central Connecticut State University, including a course on the geography of wine, a subject that turns out to include a vast range of vinous things. Early on, he explains to non-geographers–that would be nearly all of us–that the geography of wine is more than a collection of wine region maps, but rather the application of four broad traditions of geographical study to the particularities and peculiarities of wine: environmental / physical explorations of soil, climate, and so on; “man-land” or human ecology approaches, focusing on the economic / agricultural / cultural adaptations of people to places; the regional studies tradition that tries to puzzle out why a place works the way it does; and spatial analysis, encompassing everything from Geographical Information Systems technology to modeling the physical location of wine markets.

Which adds up to a lot, just about everything except the details of winemaking and wine tasting. In a string of chapters that come at his subject from every angle, Sommers marches methodically through climate, soil, why some varieties work in some places and others don’t, commercial viticulture and the natural habitat, wine diffusion, colonialism, rural production and urban consumption, the relative geographies of wine, beer, and spirits, wine tourism, and a lot more. Some of this terrain will undoubtedly be familiar to many readers, but some parts of this systematic review are bound to be new–I, for example, had never thought before about the reasons for the relative locations of different kinds of wine outlets–supermarkets, specialty wine shops, convenience stores, discounters, and so on.

Sommers admits early on that he isn’t offering himself up as a wine expert–and it shows in places. His discussion of Bordeaux, done to illustrate the importance of matching grape variety to place, focuses on Cabernet Sauvignon, even though Bordeaux mainly grows Merlot. Discussing Port and Sherry–wines spread all over the world from their seacoast locations–he accurately describes how Port is fortified with grape spirits but explains Sherry’s higher alcohol level as the result of “blending”; it, too, actually gets fortified with distilled spirits. But none of this is the point of the book.

The work manifests one distinct oddity. Sommers’ point that geography is more than map-making is well taken; but the book contains, amazingly, just one map, in an appendix on climate zones. A couple of outline maps, maybe a diagram or two, wouldn’t have hurt.

Still, the book draws together a number of valuable perspectives on wine, wine culture, and the wine business into one place. For wine consumers whose education on the subject has been hit and miss–and again, that would be most of us–it’s a productive read.