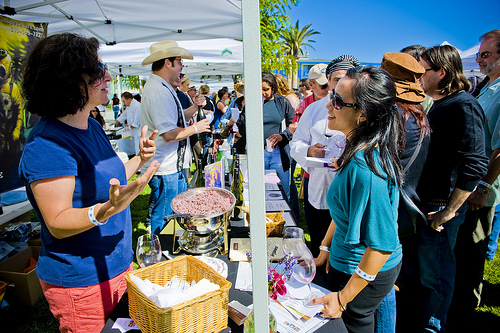 Wine country is now 15 minutes from downtown San Francisco, thanks to the surge in wine producers that are popping up all over the East Bay (and in San Francisco proper, too!). Oakland, Alameda, and Berkeley are now home to more than a dozen wineries that range in size from a couple of people and a couple of barrels, to some of California’s most lauded wineries.

A couple of years ago, these wineries got together and formed a marketing association that would help them all gain more visibility. This organization, known as the East Bay Vintners Alliance, has begun to put on yearly tastings to showcase the wines of its members and make good on the promise of an urban wine country in the East Bay.

I had a chance to sneak off to Oakland a couple of weeks ago on a picture perfect sunny day and hang out with the hundreds of Bay Area wine lovers that showed up to sample wines and special food pairings from some great restaurants in the area.

The event was, as far as I can tell, a smashing success. The weather alone would have made it a pleasant enough experience, but the food was quite good, including a huge cheese spread that I made several passes on once I had finished tasting all the wines.

This was my first opportunity to sample wines from all the members of the Vintners Alliance, and I’m happy to report that there’s some truly great wine being made in the East Bay’s urban wineries, and not just by the established names like J.C. Cellars, Dashe, and Rosenblum. There were a number of wines that were not to my taste, but the bulk of the wines were competently made and if they weren’t all spectacular, they certainly all showed both the hard work as well as promise of several new small producers.

My scores from my tasting follow below. Prices quoted are the suggested retail price for purchase direct from the winery.