When Wine Isn’t Enough of a Cash Crop, Grow Marijuana 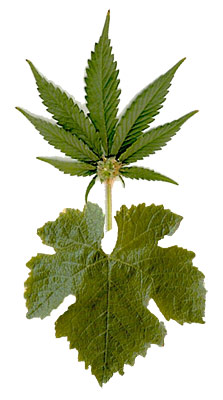 Who knows where this stuff comes from? Or why the first place I find out about it is some newspaper in the UK. But apparently times are tough for some grape growers in Washington state, so instead of putting the hard work in to grow wine grapes, they’re turning to Marijuana instead. Or perhaps more accurately, they’re selling out to friendly people who show up willing to pay cash for their vineyards.

Apparently several former vineyards have been converted to Ganja fields in the last year or two. But one has to wonder at the wisdom of such an approach given that due to their need for sun, most vineyards are quite exposed and easy to spot from the air. As in, easy to spot from a DEA helicopter.

Or maybe these folks are getting really savvy and they’re just shooting for a sensimilla cover crop in between the rows. The stuff grows pretty quickly, maybe they’re getting a full, um, harvest by the time the rows need to be cleared in the spring.

I’m reminded of a great song by Little Feat… “Just give me: weed, white sand, and wine, and I’ll be willin'”