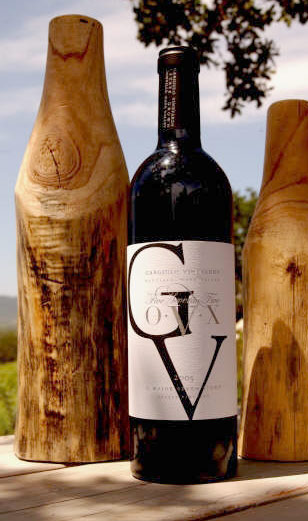 There’s something really cool about seeing a young winery start to hit its stride. I’ve only seen a few newborn calves and foals in their first moments after birth as they learn to use their spindly legs, but it’s hard not to feel a sense of pride when after a few minutes, they go galloping around in circles.

I was first introduced to Gargiulo Vineyards at a wine bar in San Francisco a couple of years ago. I just happened to stop by for a drink, and April Gargiulo was on hand, pouring what was then her family’s second release to a hip crowd of San Francisco wine lovers. At the time, I wasn’t blown away by the wines — they were somewhat awkward, and didn’t fully hang together — but April seemed very serious about what they were doing. It was also clear that the family had made a serious investment in their vineyards in the heart of Oakville, so I’ve been keeping tabs on the winery over the last few years, and watched them go from their awkward first steps in the market to where they are now, a consistently excellent producer.

Gargiulo Vineyards was started in 1992 when Jeff Gargiulo and his wife Valerie purchased a 40 acre vineyard in Oakville called Money Road Ranch. Like many of the new vineyards owners in Napa, the Gargiulos come to their new occupation by way of a lifelong dream. Jeff has worked in the agricultural business his whole life, but always thought that one day he might have an opportunity to merge his own love of wine with his work on the business side of agriculture. It was only a matter of time before the right property came along, and suddenly the Gargiulos were in the vineyard business.

The first task of that new occupation was the replanting and re-engineering of the vineyard, with new rootstocks and planting grids and trellis systems, a process which took three years. The resulting vineyard is mostly Merlot, with smaller amounts of Cabernet, Sangiovese, and Pinot Grigio.

The vines weren’t ready for prime time for another four years, and for the first couple of years after that, the Gargiulos sold their fruit to local producers while they fine tuned their operations. In that time the family purchased another piece of property at Oakville crossroads, sandwiched in between Rudd and Screaming Eagle. Needless to say, it’s a prime piece of real estate, and one of the few south-facing sloped vineyards in the Oakville appellation. The Gargiulo’s named this vineyard OVX, and planted it with Cabernet Sauvignon, Cabernet Franc, and Petite Verdot.

In 2000 the family felt ready to produce their own wines from the Money Road Ranch vineyard, and have slowly ramped up production, as they build their own winery facility which is due to open this fall. Starting in 2004, the family also began harvesting and bottling wine from the OVX vineyard, the potential of which is perhaps best captured in this bottle of wine.

Made up of 86% Cabernet Sauvignon; 5% Merlot, 5 % Cabernet Franc, 4% Petite Verdot, the wine can legally be called a Cabernet, and is indeed labeled as such, but it drinks more like the Bordeaux-style blend that it is. This is the inaugural vintage for this particular single vineyard bottling, which looks to be slated to become the winery’s flagship wine. Only 250 cases will be made each year.

Named after a favorite jazz chord, the wine is made by the estate’s winemaker Kristof Anderson who has been with Gargiulo since 2003. Kristof’s resume includes stints as winemaker at Lewis Cellars, Del Dotto, and at Saddleback Cellars.

The G Major Seven Study is made from the best blocks of each grape variety in the family’s OVX vineyard. The entire vineyard is farmed with deficit irrigation and a combination of sustainable soil management practices and organic farming, and these blocks yield approximately two and a half tons of fruit per acre. The wine spends 19 months in French oak (90% new) before bottling.

This is the finest wine I have tasted from Gargiulo, but based on this single bottle, I expect to taste many more.

Full disclosure: I received these wines as a press sample

Tasting Notes:
Inky garnet in the glass, this wine has a nose of cherry, tobacco, and earth aromas singed with a hint of burnt vanilla. In the mouth it is smooth, full, and rich with spicy sandalwood and cherry flavors that are propped up by deeper notes of wet dirt and tobacco. Faint faint tannins dance at the periphery of the palate as the wine finishes long and as beautiful as its namesake.

Food Pairing:
This wine would be a great accompaniment to this venison daube with cumin and coriander.

This wine is generally sold to mailing list members and a few select retailers. It is available for purchase on the Internet.