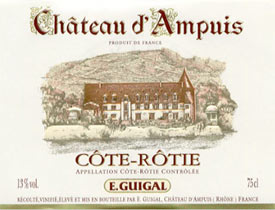 One of the greatest experiences that a wine lover can encounter is a wine that stops them in their tracks. I’ll admit that I’m excitable in general, but there’s nothing that gets me quite so giddy as a schoolboy as when I stumble across a wine that truly bowls me over. Such wines are the closest I get anymore to the emotions of that first passionate kiss in a new relationship — they electrify me. While the world slows down to a crawl around me, all I want to do is stick my nose in the glass and inhale slowly.

This is one of those wines. I was minding my own business, tasting away through a public wine tasting in San Francisco. As a matter of course, I marched up to the Guigal table, and tasted through what they had to offer, like I have done before at other tastings. I enjoy Guigal wines a great deal, especially their more exclusive bottlings.

But while I’ve had Guigal wines that have been great, even exceptional, I’ve never had one knock me on my ass in quite the same way as this wine did when I put it in my mouth.

Etienne Guigal founded his winery in the tiny Northern Rhone village of Ampuis in 1946. The vineyards he purchased to begin producing wine had been growing grapes for as long as anyone can remember. So long that some of the stone walls in the fields dated back more than 2400 years to Roman times.

The enterprising 32-year-old Guigal was no stranger to the wine business when he bought his first vineyard, having worked as a winemaker for several years before striking out on his own. By the time his blindness forced him to turn operations over to his son in the Sixties, he had personally worked more than 67 vintages.

The estate is now beginning its third generation of family ownership, and is widely recognized as one of the top wine producers in both the region, and the world. From its humble beginnings, the estate has grown to sizable proportions, or what amounts to sizable proportions in the relatively small appellations of the region. The estate now owns vineyards in Côte-Rôtie, Condrieu, Hermitage, Crozes-Hermitage, and Saint-Joseph, and buys a significant amount of fruit from producers all over the region.

I’m not entirely sure of the estate’s current production levels but they are somewhere north of 340,000 cases, with the bulk of that being wines made from purchased grapes. The wines are currently made by Philippe Guigal and his father Marcel.

This particular wine is 95% Syrah and 5% Viognier, culled from some of the oldest blocks among 6 of Guigal’s vineyards:

Some of these vineyards were planted in the early 16th century. Of course, they have been replanted over the ages, and the average age of the vines now is around 50 years. While the vineyards are not certified, they are essentially farmed organically.

The grapes for the wine are hand harvested, meticulously sorted, destemmed, and then undergo a cold soak for sometimes more than a month before fermentation is allowed to begin in steel tanks. After fermentation, the juice is transferred to the estate’s own barrels (since 2003 the estate has run its own cooperage on the property) where it ages for at least 38 months before bottling.

Tasting Notes:
Medium garnet in color, this wine leaps out of the glass, grabs you by the scruff of the neck and drags your ass into a field in the middle of southern France and then stands back laughing as you stumble blissfully among sage, lavender, rosemary, and a small lake of fresh cassis. In the mouth the wine is equally explosive with an incredibly juicy core of cassis that is riddled with crystalline, granitic minerality. Perfectly balanced, with the texture of satin, and tannins that don’t grip so much as they caress. And just when you think it can’t get any better, the floral notes from the Viognier sweep in like valkyries to carry you away into the finish. Please, sir, may I have another? This is definitely the best current vintage of Côte-Rôtie I have ever tasted.

Food Pairing:
I’d love to drink this with a slow roasted leg of lamb with rosemary.