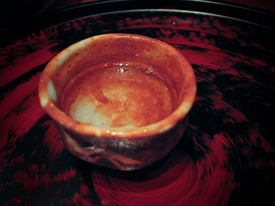 As many of you know, I have a thing for sake, after being introduced to the high-end stuff when I was living and working in Japan. I try to review great sakes here on Vinography as often as I can, while at the same time trying to teach those who are unfamiliar with the stuff a bit more about it.

Some readers, either through their questions, or their outright requests, have rightly pointed out that I have skipped over some of the basics when it comes to sake, and these basics aren’t exactly as well known among my readers as, say, the basics of how to taste wine.

So without further ado, I bring you:

The Vinography Guide to Drinking, Serving, Storing, and Enjoying Sake

What is Sake?
Let’s start with a quick refresher on sake and how it is made. Alcohol made from fermented rice, along with “modern” rice growing techniques, was originally brought to Japan from China in roughly the 3rd century BCE. Like with many things imported from the mainland, over the next few centuries the Japanese adapted and transformed sake into something uniquely theirs. What we know as fine sake today remains a product of rice fermented in spring water with a combination of yeast and a special mold known as koji, which was likely also brought over from the mainland at a later date. Today’s sake, however, bears little resemblance to the sake of past centuries.

Modern sake results from many innovations and refinements, but most dramatically from mechanical rice milling equipment, which has given rise to the various grades of sake that are based upon the degree of milling that each rice kernel receives, as well as sterile filtration, which provides us with the crystalline clear brews that are becoming more and more popular around the world.

There are several other less common artisan varieties of sake (aged, natural yeast fermented, etc.) as well as the industrial grade stuff that is served hot in most sushi restaurants that don’t merit addressing at this point.

Why Drink Sake?
Sake has become increasingly popular in recent years for its subtle, delicate flavors and its ability to pair with similarly subtle flavors in many cuisines, including in particular, Asian foods and seafood. Sake also matches a lot of modern cuisine which increasingly draws on Japanese influences, among other Asian localities. In particular, and not surprisingly, sake is a wonderful match with raw fish (which can easily be overwhelmed by some wines) provided, of course, that the fish hasn’t been drowned in soy sauce and wasabi (a common crime).

Hot Sake Versus Cold Sake
One of the questions that prompted the writing of this article was a reader wanting to know when and what kind of sake to drink cold versus warm. This is an excellent question, and one that many sake beginners have, after having mostly experienced sake in those little warm carafes in sushi bars.

There are two (and a half) factors to consider when warming sake.

The first is the grade or quality of sake. Generally the higher grades of sake (ginjo and daiginjo) are quite delicate in flavor and suffer (rather than benefit) from warming. Lower grades of sake (which can sometimes have rough edges) benefit from warming, which makes them more smooth. Most of the time you’ll want to drink your fine sakes cold (at the same temperature as your white wine).

The second factor to consider in the serving temperature of sake is the flavor profile of sake. Sakes with earthier, gamier flavors often benefit from being served at room temperature or slightly warmed (e.g. 5-10 secs in the microwave). Yamahai sakes (those made with some wild yeasts in the mix) which have dried mushroom flavors, are often better warmed, for instance.

The final consideration with regards to warming sake is simply whether you want something warm to drink. When it’s cold outside, warm sake is great! Don’t be afraid to experiment.

Storing Sake
The most important thing to remember when it comes to storing sake is that most sake isn’t meant to be aged like wine. That’s not to say you can’t do it, but the flavors that most of us are looking for in our fine sake don’t tend to last over time. Fine sake is meant to be drunk within several months of purchase, and if you ever happen to come across the unpasteurized variety of sake known as nama sake (also namazake) this more delicate of brews is meant to be drunk within weeks.

This effectively means that there’s no such thing as a sake collection. I have a bottle or two on hand at any given time, but mostly when I want to drink sake, I go out and buy it a day or two before the occasion.

All sake should be stored in the refrigerator at all times, both before and after opening the bottle. It will keep there for several weeks, and thanks to most bottles being closed with screwcaps, that means I don’t have to worry about not finishing a bottle if I decide to open one with dinner.

Serving and Enjoying Sake
There are two primary ways that I recommend serving sake. The first, and easiest way for wine lovers, is simply to treat it like a white wine — serve it in any glass that you would use for a Riesling, Sauvignon Blanc, or other crisp white wine. I recommend making smaller pours than you would for white wine, simply because sake is generally more alcoholic than wine, and smaller pours get consumed before they can warm up too much. Be sure to keep the bottle cold between serving.

The other enjoyable way of serving sake celebrates sake’s role as part of the aesthetic experience of a Japanese meal. Like many aspects of traditional eating and drinking in Japan, sake consumption has its own particular aesthetic and set of specialized serving and drinking vessels.

These range in construction, size, and specific use, but generally are some variation on a pitcher and a small cup. From priceless, century-old handmade pottery to modern handblown glass and everything in between, sake cups and bowls are celebrated (and collected) as a core part of the Japanese experience of drinking sake, especially as part of a formal dining experience like the multi-course kaiseki meal. I’ve included an image on the right of a particularly nice cup that I had the honor of using at a meal in Tokyo last year.

On occasion (in restaurants mostly) sake can also be served in a square wooden box, with or without a glass sitting inside of it, overflowing with sake. If served in a box (usually for some celebratory reason) the box is simply treated like a cup that is most easily drunk from the corner. If the box contains a glass brimming with sake, that is best sipped without hands until the glass can safely be picked up and used without fear of spilling. Once the glass is empty, the overflow can be drunk from the box.

So Go Drink Some Sake!
Get out there and try some, already! Whole Foods carries some, as do several other gourmet supermarkets, or better yet, visit a wine store or sake store in your neighborhood. Worst case, order some on the Internet. Looking for suggestions on what sake to drink?

If there’s anything I didn’t cover that you still have questions about, let me know!