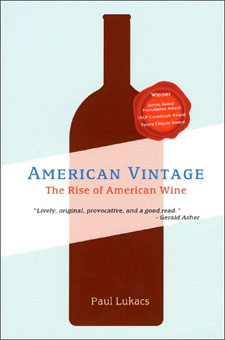 Is wine food or alcohol? Most Americans would immediately choose “alcohol,” perhaps laughing at the question.

In Europe, though, that wasn’t the case for centuries. Before water purification became widespread, wine was safer to drink than water. The idea that wine is primarily an intoxicant is relatively recent, and like so many influential memes in the world today, it comes from the United States.

Paul Lukacs’ book American Vintage: The Rise of American Wine was inspired by the author’s realization at an Italian wine event that U.S. wine has become not only the best in the world (as measured by critics’ ratings), but that U.S. wine — fruit-forward, big-bodied and high in alcohol — is changing the style of wine throughout the world. Even those who vehemently oppose the former idea must concede the latter.

If all Lukacs, chair of the English department at Loyola College in Maryland, was interested in was those two points, he could have started his timeline as late as the 1960s, perhaps with the opening of the idea lab that was Robert Mondavi Winery. In fact, he expends a lot of verbiage assuring us that American wine, until the end of the 1960s, almost invariably reached its highest peak at “serviceable.”

Instead, digging into the history of American wine, Lukacs found himself fascinated by its relationship to alcohol. This continuing theme of the book ends up far more interesting than another retelling of how Mike Grgich and Warren Winiarski proved, in Jim Barrett’s words, that “kids from the sticks” could make wines better than the best of France, and a helluva lot more useful than one more polemic about high-alcohol wines.

Prohibition was a defining time in America’s relationship with wine and liquor, as well as crime and honesty. Lukacs points out that if the wine industry had been smarter, Prohibition could have been an era when Americans became wine drinkers.

Here’s why: When Thomas Jefferson opined about the benefits of wine, one of his strongest points was that it led to temperance. What Jefferson meant by temperance was not teetotalling, but drinking wine in moderation with dinner, the way it had been consumed in Europe for centuries. Like many citizens of this always-culturally-conservative country, Jefferson didn’t want to see his neighbors getting blasted at the saloon on bourbon and rye.

Prohibition could easily have gone in a different direction. Home winemakers were allowed to make a fairly large amount of wine for their own consumption, and some California grapegrowers actually did better shipping their grapes to the East Coast than they had selling to the California Wine Association monopoly that had dominated the industry for more than 20 years before Prohibition. A few politicians argued that wine should be entirely exempt from Prohibition. Imagine how that would have changed the roaring ’20s: no speakeasies, no culture of lawlessness, less corruption, less capital transferred to criminal enterprises.

Instead, the country got a dozen years of bathtub gin that promoted the sanctimonious-in-public, sin-in-private behavior we still exhibit regarding sex and media. For the most part, unlike French, Spaniards and Italians, Americans don’t drink to appreciate the beverage; they drink to drink.

Lukacs blames the wine industry for not promoting its product as one of temperance and culture, instead selling it in saloons as just another flavor of booze. He points out a number of occasions in the late 19th century when the wine industry had a chance to differentiate itself from liquor purveyors, but chose not to.

The disturbing thing about this observation is that little has really changed regarding wine’s place in American culture. Those of us who write about wine or work in the industry are a step removed from the way middle America sees it.

I’m writing this from San Francisco, where wine does belong on the dinner table for the most part. But I read this book while on vacation in Honduras. The island of Roatan is dominated by American tourists, many from middle America. People who drank wine there didn’t stop at one bottle; they stopped at near-unconsciousness. When I told people I work in the wine industry, the inevitable reaction was not “Do you get to taste a lot of good stuff?” but “How great it must be to get wasted every day!”

I’ll get off my high horse now (horse riding makes my butt hurt). Lukacs’ other main point of interest, which is far less convincing, is his respect for and concentration on non-West Coast wines, and even worse, wines not made from vinifera grapes. It’s interesting to read a book on American wine history that’s not focused on California, but if you’re writing a book about American wine’s “rise” by world standards, you’re wasting your time talking about wine from Ohio and Indiana and Missouri. And please, hold the Catawba and pass the Cab and Pinot.

Lukacs is a very polite writer; he reads like a courtly and well-read man who would be pleasant company at the dinner table. The downside of this is the constant feeling that he’s keeping a soft focus on the foibles of wine celebrities.

For example, he cites Ellen Hawkes’ excellent “Blood and Wine” as a source on the Gallo brothers, but doesn’t use her many hard-hitting and fascinating anecdotes. Thus I found the book most interesting in sections when it discussed people about whom I know little, like Nicholas Longworth, whose Ohio-grown pink Catawba made him the first commercially successful winemaker in America. I also was interested to learn that former preacher Thomas Welch invented non-alcoholic grape juice because he was, in words I would use but Lukacs never would, a teetotalling zealot and insufferable prig. Seriously: Jesus could work miracles, yet He didn’t see the need to turn water into non-alcoholic grape juice. (Oops, high horse again. Sorry.)

But for sections about Mondavi or the Gallos or Grgich, among others, what’s not written here is more interesting than what is.

I can’t finish this review without pointing out something that threw me off at the beginning: Page 3, to be exact. About the famous Judgment of Paris tasting, Lukacs writes, “Since Spurrier and Gallagher had promoted the event extensively, a crowd of spectators, including a number of journalists, came as well.”

That’s not true, and it’s not a minor mistake. To be fair, Lukacs wrote this five years before the one (1) journalist at the event, George Taber, published his own book. But the fact that Taber was the only journalist present, and that he could speak French fluently, was crucial to the event’s historic importance, because Taber got complete access to the judges’ comments, while a flock of journalists would probably have been held back.

Sadly, I spent the next 359 pages doubting the veracity of everything. Did Thomas Welch really invent a system for simplifying spelling? Was Warren Winiarski really inspired to make wine by a winemaker in Maryland? If there’s ever another edition of this book, that early error needs to be corrected.

W. Blake Gray is a San Francisco writer and Chairman of the Vintners Hall of Fame Electoral College. His high horse is named Trigger Happy.