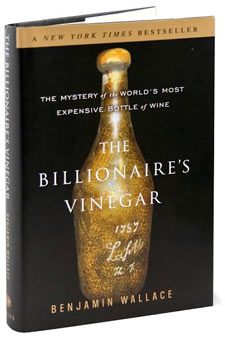 If you’re getting your morning jollies reading about the amazing collapsing Ponzi schemes of investment wizard Bernie Madoff, you’ll love The Billionaire’s Vinegar: The Story of the World’s Most Expensive Bottle of Wine. It’s all there: fraud on a grand scale; apparently smart people who should have known better committing serial stupidities; rich people doing pratfalls in public. It’s like a bottle full of schadenfreude; what more could you ask from a wine book?

In this particular case, the super-rich and the official arbiters of vinous taste make fools of themselves over a stash of wines “discovered” in the early 1980s during a Paris renovation, wines from the 1780s that had allegedly belonged to Thomas Jefferson, perhaps the worlds most statesmanlike wine hound. This lucky find was announced to a spectacle-thirsty world by Hardy Rodenstock, a German collector of and merchant in fine and rare old wines. Once Rodenstock convinced Michael Broadbent, widely regarded as the world’s leading expert in old wines, that the Jefferson bottles were the genuine article, Broadbent proceeded to auction one of them at Christie’s in London in 1985 for $150,000–following an impulsive bidding war between Wine Spectator publisher Marvin Shanken and the eventual winner, Kip Forbes, son of publisher and high-profile collector Malcolm Forbes.

And what did the Forbses do with this miraculous, priceless bottle? They put it in a display case at the Forbes offices in New York, with a little spotlight beaming down on the bottle to show it off. Soon the well-heated cork, fully dehydrated, slipped down into the bottle, leaving only a wax outer seal. You’d think the Forbses could have afforded a Vinotemp wile cooler.

The story, told in perfectly deadpan style by author Benjamin Wallace, unravels from there. We learn that Shanken graduated last in his class at the University of Miami. More important, Rodenstock becomes the undisputed star of the international coterie of super-rich wine trophy-seekers; extravagant dinners and tastings are held on multiple continents; wine writers get sucked into the vortex; more and more bottles somehow keep appearing and going on the market.

Here and there, someone raises a little red flag about how these wines are too good to be true–which, of course, they are. There are some delightful, educational interludes as physicists in several countries try to establish the actual dates of the wines. I won’t give the ending away, since there isn’t one–it’s still in court.

As you might expect, all the players who helped inflate the Jefferson bottle bubble–with the possible exception of Rodenstock–are still doing quite nicely, thank you. They’ve hardly missed a beat, or a good bottle. You may not, however, hold any o them in so much awe after you finish the book. Billionaire’s Vinegar made for great beach reading when it came out earlier this year; this winter, I suggest curling up with a glass of port–don’t worry about the vintage–and a crackling fire.

Benjamin Wallace, The Billionaire’s Vinegar: The Story of the World’s Most Expensive Bottle of Wine, Crown, 2008, $24.95 (hardback)