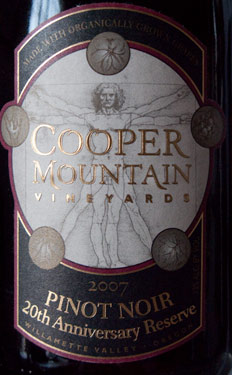 One of the great pleasures of wine appreciation will always be the process of tasting the wine of a single winery over a very long span of time. Tracking the products of a winery’s labor over the years can be remarkably rewarding regardless of whether the experience is one of consistency, or of progress and change.

I’ve only had the pleasure of tasting the last two vintages of wine from a little family winery in Oregon’s Willamette Valley. Despite my recent introduction to Cooper Mountain Vineyards, I can almost taste the twenty years that came before this, their 20th vintage. Over those twenty years, the winery has evolved considerably, and no doubt the wines have as well.

The Gross family farm has actually been growing wine grapes since 1978, when Psychiatrist Dr. Robert Gross and his wife Corrine planted their Pinot Noir, Chardonnay, and Pinot Gris vines on the sloping sides of Cooper Mountain outside of Beaverton, Oregon.

Cooper Mountain is an extinct volcano, but you wouldn’t know that by looking at it necessarily. And depending on where you come from, you might not even call it much of a mountain, rising only 734 feet above sea level as it does. But you don’t need

After selling their grapes to wineries for the first four or five years of production, the Gross family decided to begin making their own wines in 1987. Around this time Dr. Gross also became interested in sustainable farming, and began the journey that led them first to organic farming and winemaking, and then to full Biodynamic winemaking, which the winery has been practicing since 1990, and has been certified for since 1999.

I think it would have been fascinating to see the evolution of the wines over time, both as the vineyard practices improved, as well as watching the winemaking style shift to accommodate the strictures of Organic and Biodynamic regulations.

Interestingly, in addition to their full Biodynamic regimen, the winery has also been making a wine with no added sulfites (since wine contains naturally occurring sulfites, it can’t be called “sulfite free”) for the last 5 years — the first of its kind in the United States, or so the winery claims.

The winery has continued to evolve with the addition of full-time winemaker Gilles De Domingo in 2004. Having grown up working the family winery in Bordeaux, De Domingo trained as a winemaker in Australia, New Zealand, and South Africa, before moving to Oregon to work at wineries like King Estate and Bridgeview prior to joining Cooper Mountain.

De Domingo makes several wines from the winery’s 100 acres of vineyards, split into three tiers — an entry level series of wines under the Cooper Hill label, and then a Reserve series and a small production set of wines known as the Five Elements series. Presumably this wine, despite it’s 20th Anniversary designation fits into the middle tier “reserve” series of wines. Blended from several of the estate’s vineyard sites it is supposed to be a high quality, moderately priced Oregon Pinot Noir, and it succeeds admirably on all counts.

My experiences with the single vineyard bottlings, such as their Mountain Terroir Pinot Noir, have been great, and like this wine, they seem to exude a sense of honesty. Cooper Mountain Vineyards is making some excellent wines that are worth seeking out now, but also worth watching over time, as I suspect they will continue to get better.

Tasting Notes:
Light ruby in color, this wine has a somewhat shy nose of smoked meat, dry pine duff, and wet dirt. In the mouth it is delicate and beautifully balanced with a remarkable sense of having just been yanked up (or poured through) a patch of earth. Flavors of woodsmoke, wet earth, and dried pine needles surround a tart raspberry and redcurrant fruit core. Very distinctive flavors linger into a nice finish.

Food Pairing:
I’d love to drink this wine with Chinese tea-smoked duck, which is sort of the Chinese equivalent of duck confit. Tasty stuff and perfect for the smokiness of this wine.