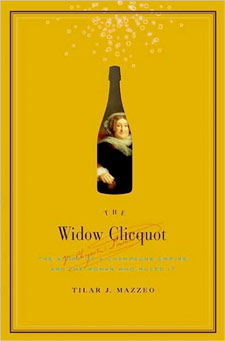 Great books are often the result of obsession. They have to be, considering the hours put into work that may never be published.

Tilar Mazzeo, an assistant professor at Colby College, spent years pursuing her obsession with the life of the Veuve (“widow”) Clicquot for her book The Widow Cliquot: The Story of a Champagne Empire and the Woman Who Ruled It. The Widow built one of the leading Champagne houses in the early 19th century in an era when few women were internationally famous for anything other than marrying well or divorcing scandalously.

Most writers would have given up. All told, Mazzeo learned achingly little about Barb-Nicole Clicquot Ponsardin in all her years of research. The Widow left no diary, and few of her personal letters survive. None of her contemporaries wrote stories rich with personal insight.

Because Veuve Clicquot has operated continuously since its founding in 1806, the Widow’s meticulous business records survive, and they tell us how hard she worked and illuminate her successes and failures.

Yet Mazzeo had set out to learn the Widow’s inner thoughts and fears, tears and triumphs, loves and losses. She did not. But like the Widow herself, who kept working in the face of near-bankruptcy at times, and under occupation by armies from several different countries at others, Mazzeo kept on going.

What she ended up with is an entertaining book that brings to life France, and specifically Champagne in the early 19th century.

Mazzeo is scrupulous about telling us where her research yielded facts, and where she’s filling in with historical events that may or may not have involved Barb-Nicole. It’s oppressive early on, because she has few real facts about the Widow’s life prior to marriage. She keeps telling us Barb-Nicole might have done this or that because others did in that era — a tumultuous time that included the bloody French revolution and the rise of Napoleon. I confess that, while respecting Mazzeo’s honesty, I thought the first few chapters could have been better as a historical novel. The story has integrity but lacks the bodice-ripping that would have made it really entertaining.

But Mazzeo’s years of interest in her topic pay off when she gets into the Widow’s business career. She does a great job of explaining how Champagne was different back then.

For one thing, Champagne was much, much sweeter, with 200 g of residual sugar — more than today’s dessert wines. Secondary fermentation was poorly understood so the bubbles were unpredictable, often exploding the bottle. And even after disgorgement, Champagne often had many unappealing ropy strands of dead yeast cells.

The Widow was not just a businesswoman: She took an active role in winemaking. Her greatest achievement was solving the ropy-yeast-cell problem. She came up with the idea of riddling — minutely turning the bottles each day so that the yeast collects near the cap, where it can all be disgorged in seconds. This made her Champagnes clear and beautiful, a huge sales advantage that allowed her to compete with better financed rivals like Jean-Remy Moet, who constantly courted Napoleon’s favor.

The Widow was also a great personnel manager. Champagne then and now was a gossipy industry. Yet her revolutionary technique remained her proprietary secret for nearly a decade, despite Moet’s frantic attempts to figure out how she was keeping her bubbly clear. In fact, Moet didn’t duplicate the technique for 15 years. Mazzeo credits the Widow’s forward-thinking plan of profit sharing with key employees for inspiring such tight-lipped loyalty.

The Widow also took daring risks, such as violating a wartime shipping embargo to try to get her product to Russia ahead of Moet’s. She walled up years worth of bubbly during occupation to prevent German and French troops from drinking it all. But when the Russian army came through, she judiciously gave out her Champagne to officers, reasoning correctly that her occupiers today would be her customers of tomorrow.

While I read raptly the historically accurate tales of war and espionage that characterized the era, that nagging sense of regret popped up again when Mazzeo described the two younger men to whom the Widow seemed unduly attached, one of whom eventually took over the business from her when she retired. Once again, the author’s choice of integrity left the Widow’s bodice unripped, so to speak. Perhaps that was indeed the reality, but if so it leaves the reader sad, considering all the romance the Widow’s wines have facilitated.

On the whole, the book is a good introduction to the early history of Champagne. It’s very readable: Mazzeo is equally adept at describing the fabrics of the wealthy elite or detailing the complex processes of making sparkling wine.

But the Widow’s inner life remains as opaque as when Mazzeo started the project. As a result I finished the book with great respect for the author, but also sadness as well.

The Widow Clicquot: The Story of a Champagne Empire and the Woman Who Ruled It, Collins Business 2008, $17.13, (Hardcover).

Though he acknowledges the overall superiority of Champagne, San Francisco writer W. Blake Gray celebrated Inauguration Night with a fine American sparkling wine, and hopes Barack Obama did the same.