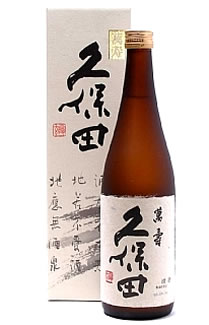 When people often ask me how I “got into wine” I have a sense that they are expecting me to relate some story of a revelatory mouthful — that one wine which struck me like a lightning bolt and sent me down the path to become the wine fanatic that I am today. Strangely, I possess no story like that about wine. I remember merely a pastiche of many special and prosaic moments with wine that have gradually led to me to the depths of my current passion.

I do, however, have a story like that about how I fell in love with sake.

It was the year 2000, and I was a Director of User Experience at Sapient Corporation, and I was asked whether I would be interested in going to Japan to help the company open an office there. Single at the time, with no pets or other obligations, I excitedly said that I would at least go on the initial exploratory trip, and would make my decision based on that experience.

The company planned to make its introduction to the market with the help of a partner firm, a relatively upstart organization that happened to be headed by several of the former top executives of BCG Japan. Our second night in the country, they took us out to what, at the time, was the best sushi I had ever eaten in my life in a private sushi club in Tokyo’s Roppongi district. I knew that my job description that evening was going to involve the consumption of a lot of alcohol, but I didn’t much care for beer. So when it was offered, I asked politely if I might drink sake instead. The CEO of our partner firm barked at the chef behind the sushi counter, and that’s when it happened.

In my memory, the lights dim a little bit around the restaurant so that the sushi chef is bathed in the sole splash of bright light. He places a beautiful small wineglass on the counter, its bowl foggy with the chill of the freezer he has just taken it from. Then he turns slowly and reaches down below the counter to emerge with a huge brown bottle in his arms, its striking handmade paper label brushed with a stroke that resembles a huge number “2.” My glass is poured and placed in front of me, shimmering and cool. And my first sip is like drinking a pristine glacial lake under a full moon.

I had the presence of mind to keep my initial outburst to something along the lines of “Wow, this is really good.” But what I really meant was “Holy fucking shit, THIS IS SAKE?!?”

And that was my introduction to the sake known as Kubota Manju.

To put this in terms that might make more sense to wine lovers, here’s an analogy: until that point I had been drinking sparkling wine from a box (heated up in the microwave, I might add) and then someone poured me my first glass of properly chilled Krug Champagne.

Kubota Manju is produced by a brewery known as Asahi Shuzo in the Niigata prefecture of western Japan, and it may well be the most well known fine sake in the world. Asahi Shuzo was founded in 1830 and is the largest producer in Niigata prefecture, and therefore one of the largest producers in all of Japan. Just as the massive Champagne houses who manage to strike a fine balance between making huge quantities of product at a very high quality, elevated further by a globally recognized brand, so too has Asahi Shuzo managed to turn Kubota into the Cristal of sake. The brand of the drink has eclipsed the people who have made it.

Kubota is a trade name — one of the very first successful “brands” of fine sake on the market. The sake was originally named Asahiyama, and was finally branded Kubota in 1985, taking the nickname that the brewery had enjoyed. The Kubota line of sakes, and Kubota Manju in particular, gained massive popularity in the 1980s as Japan rekindled (some would say created) its appreciation for fine sake, partially due to simply good timing and savvy marketing, but also no doubt because of its extremely high quality and taste.

Asahi Shuzo was one of the pioneers of the fine sake movement (which has only really been around for about 50 years, and successful for 30), and in particular was one of the first to use stainless steel tanks for making sake. The use of steel in sake making has a similar effect to the use of steel in winemaking. It is more hygienic, leading to lower numbers of outside or unwanted bacteria during the fermentation process, and tends to accentuate the fruit. Or in the case of sake, the floral qualities of the rice.

Kubota Manju is an unusual sake in several respects, independent of its popularity or quality. It carries no formal designation of its level of quality, which is why I’ve had to note the fact that it is actually a junmai daiginjo sake parenthetically above. For those of you who aren’t familiar with sake designations, this means that it is made from rice that has been polished down to at least 50% of its former mass, and includes no added alcohol in the brewing process. Not content to stop just past the 50% mark, Kubota Manju is usually made from rice polished down to about 33% of its former mass.

Instead of such quality designations, the Kubota line of sakes are simply given numbers, if you will to correspond to their quality. The “ju” in the name roughly translates to “celebrations” or “congratulations” (though some snidely suggest it might mean “ostentatious”) and the other character is a number. Kubota Manju means roughly “10,000 celebrations.” The two lower grades of Kubota are known as Senju (1000) and Hyakuju (100), respectively. There are also two or three other, even higher, grades of sake made with the Kubota name every year, as well.

There is a reason that this is the most popular and most well known fine sake in all of Japan. It is the same reason that I couldn’t have asked for a better introduction into the world of fine, chilled sake. It is delicate, refined, and incredibly high class, in addition to being a textbook example of top class sake from an organoleptic standpoint, and definitely one of the world’s top sakes.

While in the past nine years I have discovered sakes that I like better than Kubota Manju, it will always remain one of my favorites, both for nostalgic reasons, and because it really is damn good. I buy a bottle or two to bring back with me from Japan every time I visit, which isn’t nearly often enough.

Tasting Notes:
Colorless in the glass, this sake has a nose of cedar trees and fresh rainwater, with hints of dried orange peel aromas. In the mouth it is smooth and silky, with a beautiful weight on the tongue and a perfect dry balance that allows flavors of tuberose and orange blossom to mingle with hints of cedar and wet stone that leave the palate feeling alive and refreshed. Outstanding.

Food Pairing:
I love drinking this sake with sushi and sashimi of all kinds, but in particular with the creamy goodness of raw scallops.