Book Review: Reflections of a Wine Merchant by Neal Rosenthal 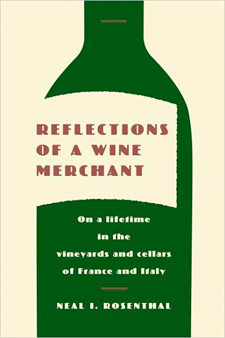 It’s not unusual to pick up a wine book that reads like a journal. But Neal Rosenthal’s Reflections of a Wine Merchant reads like it could have been the personal journey of a score of young folks who entered the wine industry 30 years ago, me included. The confluence of experience was so uncanny at times that I started thinking this guy had climbed inside my head. He may be a celebrated and accomplished fellow in the world of wine importers now, but in the early days many of us traveled the same wine paths and met many of the same people. This book was like finding a shoe box of photographs that had been put in an attic and forgotten. What a treat to open and enjoy.

The wine journal genre is littered with great tomes of memories, from George Saintsbury to André Simon to Kermit Lynch. Rosenthal’s book, like Lynch’s, is significant in that many of the people he evolved with are still making wine. And we can still enjoy those wines.

Italy, France, California. Some of the classic wines from these countries that we now consider iconic are uncovered in this book. For instance, Ezio Voyat’s 1961 Chambave Rouge is still a precious red. Neal offers a wonderful exposé of native reds grown in early California, such as the Zinfandels from Shenandoah Valley. His wistful recollection of a young Napa Valley and the pre-boom innocence of rolling up and down Highway 29, and his infatuation with Domaine Ferret and the wines and women of the domaine are all memories that I have, too.

Reflections of a Wine Merchant is divided into fifteen chapters. They vary, from revealing dealings the author has with producers to philosophical meanderings. There are chapters titled simply “Terroir,” which explain Rosenthal’s view of such things, and ones like “Carema, Bees and Friendship,” which delves more deeply into the author’s relationship with a winemaker. They’re intertwined so that the author avoids getting too tedious or too syrupy.

Neal doesn’t weight his memoirs with extracurricular activities. No searching for love or epiphany in the vineyard with a bull’s horn. Rather, Neal’s a man’s man. Tall, handsome and swarthy, he is a Sam Shepherd, larger-than-life character looking for the great wines of his times. And along the way he makes lifelong friendships we get to share.

He loves wines in the state in which he finds them. His affection for a vivacious California wine is as unrestrained as his ardor for Montefalco. His appreciation for Burgundy is more as the young acolyte poised to learn, than as one with all the answers, looking for winemakers who’ve agonized over every little thing they did in the vineyard and the cellar.

But as the title clearly says, this is a book by a wine merchant. One who became a very important taste-maker. In fact, many of the wines he brought to America are still talked about in the cellars and back rooms of wine stores by young sommeliers and wine merchants. And while some salesmen may throw out a Parker score to sell certain wines, a wine from Rosenthal’s selection needs none of that. They have their own provenance.

When it comes to his wines, Rosenthal does not over-deliberate in what he’s looking for. This is a contrarian view from so many wine writers today, who look to validate their own tastes and preferences in the wines they choose. You might say, shouldn’t a wine writer, or anyone for that matter, naturally gravitate towards the wines that reinforce their beliefs? No, Rosenthal is looking for a larger measure of excellence.

Rosenthal does it with happy innocence. He is joyful when he finds a naturally made wine or a wine that has minimal intervention by the winemaker. But I didn’t get the sense that he woke up every morning with a mission to find those wines, come hell or high water. Rosenthal has spot-on instincts. He doesn’t have to beat the reader over the head with dogmatic verbalizations that morph into some monotonous mantra. He knows quality when he tastes it, and the natural wines that he comes across resonate with his soul. In that sense, this book is more a narrative of exploration and discovery than hypotheses and deduction. The joy of sex rather than the mechanism of it.

In terms of the book’s overall construction, my inner editor would have wanted to see a little more editing. Some of the writing is choppy. Some of the facts are not always consistent — I don’t recall hearing that Verdicchio was Umbria’s most commercial wine, for instance. A fact checker and an editor looking at this book more as the lyrical story it is might have smoothed out the writing. The information is wonderful and historical, but it would have benefited from a little better rhythm to establish the path of the story, the better to sing the high notes in key.

Reflections of a Wine Merchant also mirrors this fellow wine traveler’s deep love for the land and the farmers. And because of Rosenthal’s connection to the place and the people, the wines that follow don’t need explaining. They exist to be loved. Rosenthal performs double duty by not only telling the stories that resonate with so many of us who made a similar journey, but by providing all of us with an amazing portfolio of wines that we can enjoy and fall in love with on a regular basis.

Alfonso Cevola is the Italian Wine Director for the Glazer’s family of companies, based out of Dallas, Texas. Alfonso is a Certified Specialist in Wine and a Special Contributor to the Dallas Morning News, The Well Fed Network and The Sommelier Journal. His wine blog is On the Wine Trail in Italy, posting every Wednesday, Friday and Sunday. He also recent began another blog, called The Blend, covering wine and spirits.