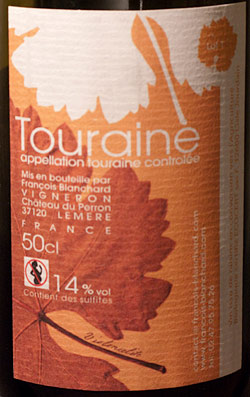 Perhaps some of the most interesting wines in the world are made by cranks, crackpots, and wackos — iconoclasts that keep time to their own secret rhythms and make wine in ways that often make sense only to them. You might say that I’m a collector of such wines and winemakers, in the same way that young boys collect baseball cards.

And today I’ll add another to my growing menagerie of eccentric visionaries that make extraordinary wine. François Blanchard is a jazz musician who one day found himself the owner of his family’s (somewhat decrepit) wine estate and decided that there was music to be made with its ancient vines.

The Blanchard family estate, known as Chateau Perron, sits on the Touraine plateau in the Loire valley southwest of Chinon, and was farmed by several generations of his family as far back as the mid 19th century, until it fell into disrepair several years ago. The young Blanchard found himself the sole heir to the family’s once prosperous farm and without much of a plan, decided to restore the estate to its former glory.

What Blanchard actually did was simply to install a little electricity, patch up a few of the biggest holes in the walls, and start giving a little love to the ancient Cabernet Franc and Sauvignon Blanc vines that poked up out of the weeds around the old stone chateau.

The weeds still carpet the fringes of the chateau, and run through the 30+ year old vines, mowed only occasionally in between the rows when necessary. Blanchard remembers a time when the family farm employed nearly seven people, but for the past six years he has been the sole farmer and winemaker, and continues feel his way through with no training whatsoever. That hasn’t kept him from making the whole operation Biodynamic, nor has it kept him from making some exceptional, unique wines.

Blanchard seems to apply his jazz musician’s sensibility to the way he produces wine. Everything unnecessary is removed, stripping the process down to its bare essentials, and then improvising using the most raw of materials.

The grapes are hand harvested, mostly by Blanchard, his girlfriend, and some occasional volunteers. They are crushed by foot, and then the reds are fermented in cement and the whites in steel, with only native yeasts, and they are left to take as long as they need. Blanchard avoids the use of sulfur dioxide whenever possible (only occasionally needing to add it to the wine) and all filtration or fining. The wine is handled as little as possible, and when it is moved, it is done so by gravity without any mechanization. The wines are also bottled by hand, and closed however Blanchard sees fit — in the case of his white table wine, with a crown cap and wax capsule.

This particular wine is bottled with a cork, but it is bottled in 500ml bottles that are normally reserved for dessert wines. Blanchard’s reason for doing this? Apparently so that 300 more people could have a bottle of it. When the production is only 1300 bottles, that does makes a certain amount of sense.

And the name for this little package of old vine Cabernet Franc? Like many of his wines, this one was named for Blanchard’s sense of the melody it sings. Part violin, part cello, part high astronomical notes of satellite. But most importantly, 100% unique and tasty.

Tasting Notes:
Inky garnet in color, this wine has a nose of nut skin, wet leaves, iron filings, and cedar aromas. In the mouth it is dark and loamy, with rich wet earth, black cherry, cedar, and nutty qualities that are held in suspension by a beautifully balanced acidity and velvety tannins. The fruit core of this wine is dark — pitch dark — and strangely both ripe and earthly bitter at the same time. A long finish accentuates the acid of this wine, and speaks to its longevity. I have had a bottle corked in my refrigerator now for 12 days and it still shows little sign of oxidation, meaning that this sucker will no doubt age for many, many years.

Food Pairing:
I’ve now had the chance to try this wine with a number of dishes, and it went particularly well with a coriander crusted grilled lamb chop that we had the other night.

This wine is sadly quite difficult to come by here in the United States, due to the small production levels that Blanchard maintains. I purchased my few bottles from Garagiste in Seattle.