Book Review: Notes on a Cellar-Book by George Saintsbury 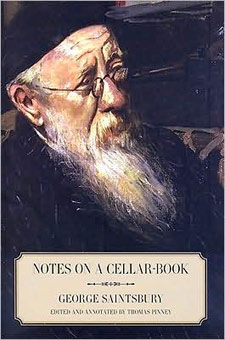 If you love to drink wine, and love a good read, you have to get ahold of this book.

The dust jacket for this re-issue and annotation of English wineophile George Saintsbury’s famous Notes on a Cellar-Book describes it–correctly–as “one of the greatest tributes to drink and drinking in the literature of wine.” It’s also the quirkiest, the most baffling and inscrutable, and the most flagrantly opinionated.

Writing in the 1920s, Saintsbury (1845-1933) was more than an avid drinker and collector; he was a legendary professor of literature in the British Isles, the author of something like 80 books and innumerable articles, and an unregenerate Tory who once staged a demonstration to keep classical Greek as a requirement for undergraduates. So when he pulled together these reflections on what he had recorded over the years about his alcoholic beverage inventory and how it had been consumed, he naturally sprinkled it with an amazing thicket of literary allusions, asides, quotations, things in quotations for no apparent reason, tirades against Prohibition in the US, and much, much more.

Thankfully, this edition comes with a fine road map to the mind of George Saintsbury in the form of an introduction and extensive annotations by Thomas Pinney, author of the definitive two-volume A History of Wine In America, himself a retired literature professor. If Saintsbury’s egregious references to Charles Lamb, Trollope,Tennyson or Moliere aren’t immediately accessible, or antique terms make you scratch your head, Pinney is there, doing the best he can. If you are momentarily confused about the distinction between kirsch and Cherry Heering, Pinney explains.

Saintsbury himself apparently realized the book might be a bit much; he included his own footnotes to his more elliptical prose, also preserved here, with Pinney’s footnotes on the footnotes.

But don’t get the idea that there is anything ponderous here–it’s a romp from start to finish. You’ll find Saintsbury musing on any topic on which you might want enlightenment: cut glass decanters, raki, mulled Port, small beer, cider, bottle shapes, rum punches, corked wine, the perils of drunkenness, the time his cellar in Cambridge flooded, the time the rats took over his cellar in Edinburgh. You will find advice on how to keep whiskey and brandy in barrels in your cellar, how best to take medicinal brandy in bed, and the relationship between Port and the English character. And yes, thoughts on just about every wine and spirit available in his multi-decade drinking career–this guy tried it all.

We also get a sampling of menus from the extravagant dinner parties of the era. Sign me up for the one with Calf’s Head à la Terrapin, Aspic of Tunny, Braised Beef, Roast Guinea Fowl, and the Anchois Zadioff, whatever that is. (Pinney is no help here.) All washed down with an 1873 Dos Cortados Sherry, an 1889 Giseler Champagne, an 1870 Chateau Margaux and an 1885 La Tache. And some Port.

Here’s how the book ends, a good example of the tone throughout, from the final paragraph of the Postscript:

“I cannot help quoting, as a colophon to this little book, some memorable words of Professor H.E. Armstrong’s in a recent letter to the Times about synthetic and natural indigo. He closed with a parallel. Alcohol as alcohol could be obtained, he said, from all sorts of things; not so ‘a vintage wine, one of the most perfect of nature’s products–to those who can appreciate perfection.’ And it is so. On those who would deprive us of it, let the curse of Nature rest.”

A man after my own heart. On another level, the Notes are a marvelous window into an important era in the history of wine, the period at the turn of the 20th century. At that time rich and/or educated Brits like Saintsbury–well, nobody was quite like Saintsbury–had appointed themselves arbiters of the world’s wines, and were busy establishing Bordeaux as the reference point for fine wine, sorting out the Ports and Sherries, crowning the Mosel, and establishing the idea of well-aged wine as the Holy Grail. In broad terms, the opinions of Saintsbury’s cohort are the conventional wisdom of today’s wine world–and here we see them being created.

If your interest in wine extends beyond what is in your glass to touch on the cultural, historical, or intellectual, you have to read this book.