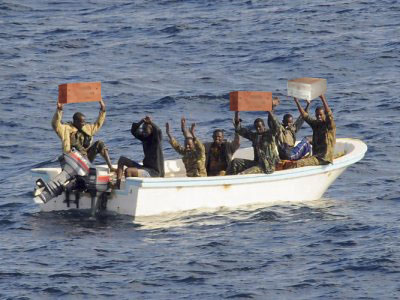 Apparently the stepped-up patrols of U.S. warships off the coast of Somalia and increased vigilance on the part of ships’ captains in the area have not been enough to prevent yet another freighter hijacking. According to CNN, early yesterday Somali pirates in several small boats were able to pull alongside and board the Matriarch, a Delaware-based freighter.

Despite the known danger of operating in the coastal waters off of Africa’s eastern coast south of the Suez Canal, the crew of the Matriarch were unarmed, and unable to offer any resistance to the pirates, who quickly brought the vessel to a halt and began their ransom demands.

So why am I bothering to mention this random bit of international news on Vinography? Because it turns out that the ship’s refrigerated cargo hold was full of, among other things, hundreds of cases of cult California wines that were destined for the port of Dubai!

As I’ve written about in the past months, the economy has taken a serious toll on wines in the upper end of the pricing spectrum. Mailing lists that were once exclusive are now increasingly accessible to motivated wine lovers, provided they have the means to purchase.

But opening up mailing lists isn’t doing the trick, especially when restaurants in Vegas, which could always be counted on to take a few cases of cult Cabernet, have stopped their ordering cold. As a result, high-end producers are having to look farther afield for buyers, to major financial centers like Hong Kong and Dubai.

Which is why 250 cases of upper-echelon Cabernet from the likes of Harlan, Screaming Eagle, Colgin, and Husic ended up on a boat from Europe to the Middle East.

And amazingly, the story doesn’t end there. When the pirates learned that part of their cargo included bottles of wine that sold for hundreds, even thousands of dollars per bottle, they dropped their ransom demands, and made off with the bottles. The AP news photo shows some of the pirates celebrating with their spoils.

The willingness to settle for expensive wine instead of ransom cash has more than a few experts mystified. Some are suggesting, however, that the wine might be seen as a status symbol in many Pirate communities. I find this highly unlikely however, given that virtually the entire country is Muslim. But who knows? These Somalis may have adopted more traditional pirate values along with their basic tactics.

Yet another Somali hijacking barely registered as an international news story, but here at home in California, the news has spread quickly throughout wine country. I called up some of the folks I know to get their take on the story.

“This financial loss adds insult to injury in these times,” said Terry Hall, Communications Director at the Napa Valley Vintners Association. “These wines represent so much hard work not to mention capital investment, it’s going to devastate some of these folks when they find out.” Apparently some of the vintners involved don’t know yet as they often take Spring Break week for vacation.

Dalia Banerjee, Executive Director of the Oakville Winegrowers (an appellation that was disproportionally represented in the hijacked cargo) offered hope that the wine might be recovered. “I can’t provide details at the moment, but at least one of the vintners has retained a private security firm with the hopes of recovering their wines,” she said.

Several people I talked to though that the whole thing was a publicity stunt cooked up by a group of cult producers who regularly meet in St. Helena. That sounds pretty far fetched to me, but if it were true, it might be the coolest underground PR stunt I’ve ever heard of — the wine equivalent of faking your own death to become famous.

The Matriarch, a bit lighter in cargo, is on its way to Dubai, with a crew that feels lucky to be alive.

At least one news service will continue to cover the hijacking and its aftermath in detail. You can follow the updates here.