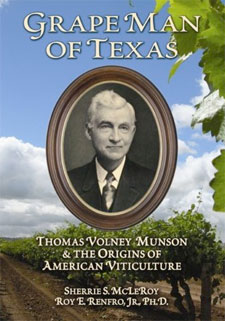 Twenty-five years ago, I got a call from a client of mine, originally from Bordeaux, who had a wine bar in Dallas, Texas. “My father is visiting from France and would like to go to Denison, Texas, and see where Mr. Munson lived and worked. Would you like to go with us?”

My friend’s father was Raymond Chandou, who studied and worked under Emile Peynaud, and who ran one of the largest and most successful wine cooperatives in France. “You bet,” I said. I was definitely in on this trip.

A few years before, while making wine in North Texas purely as an amateur, I had gone to Denison to pick grapes and to find out about some of the hidden Thomas Munson vineyards that were scattered over North Texas. One of them, an ancient field of Carman grapes, became my favorite vineyard for making wine in the area.

More than 100 years after some of those vineyards were first planted, the work that Munson did still influences grape growers and winemakers, as far away as France. The reasons for this are recounted in compelling detail in the recently published Grape Man of Texas, Thomas Volney Munson and the Origins of American Viticulture, by Sherrie S. McLeRoy and Roy E. Renfro.

Munson may still have influence abroad, but he is truly revered in Texas, and Renfro’s love for his subject is clear. Renfro’s life as a teacher and viticulturist has been devoted to elaborating and working upon the foundation that Munson built. Over the years, he has been as tireless as Munson in promoting the role of grapes and wine in America.

The first third of the book deals with Munson’s beginnings. Here he is portrayed as a man searching in the American frontier for his mission. He wandered from Kentucky to Nebraska to Arkansas before settling in North Texas, all the way along looking for his El Dorado. Texas finally provided him with the right environment in which he would set about making his life’s work.

Biographical sketches can easily be boring and flat. But Renfro channels Munson, as if all those years that Renfro spent working in Munson’s vineyards have allowed him to channel the spirit of a man who was larger than life. Munson was what we refer to in Texas as a Big Tree, and in this book we get to peek inside his head and see his dreams, feel his pain and witness how he went about a making a meaningful life in the American frontier of the late 1800’s.

People who know a little about Munson recognize him as one of the Americans who helped Europe deal with their vineyard-destroying phylloxera crisis. That was one of his many accomplishments, but one that still draws French winemakers to Denison, Texas, in pilgrimage to a shrine that saved their lives.

The 1880’s saw the peak of the phylloxera, a plague of aphids that burrowed into the roots of European grapevines and destroyed them completely. In that period, events in Africa, India and Afghanistan dominated the attention of world leaders. The world was also in the midst of a financial depression. Vines weren’t the top priority, even though they were being ravaged.

It was almost by chance that Munson met with Pierre Viala, the French government appointee from the viticulture institute in Montpellier. Viala was on a six-month mission to find grape stocks that would grow in “marly and chalky foundations.” On what seemed almost a last minute change to his plans, Viala headed to Denison, Texas, to see Munson. That meeting would change everything for the vineyards of France.

Americans were sending rootstock to France, but none were successful. Munson’s genius was in pinpointing several specific rootstocks that could be hybridized successfully in France. Munson told Viala that these rootstocks could be found in the Texas Hill Country. This was the pivotal event that saved the vineyards of France.

Grape Man of Texas reads as part biography and part mystery. Renfro’s co-writer, Sherrie S. McLeRoy, knows how to spin a yarn, and her considerable skills help to make this an entertaining and valuable reference. The last third of the book is loaded with references, appendices, a time line and something I found most useful: an alphabetical listing of the grape varieties created by Munson. It was there that I rediscovered a Texas wine I made almost thirty years ago. It was called Carman (not Carmen as I had labeled it).

That day when Raymond Chandou, his family and I went to the Grayson County College experimental viticulture station in Denison, we met with Jack Dempsey, the station’s vineyardist. Jack was a tall Texan with a welcoming smile and genuine warmth. As he and Chandou got to talking, we discovered that when Dempsey fought in WWII, his final mission included a role in the liberating army.

Comparing notes, Chandou and Dempsey uncovered that Dempsey had liberated the area where Chandou lived. Touched by this reunion of sorts, Dempsey went into his office and brought out an ancient looking book, and gave it to Chandou. The book was Foundations of American Grape Culture, by Thomas Munson.

Tears and hugs later, we said our goodbyes and went about our ways. A Texan had once again saved the French, reinforcing an enduring historical connection between peoples in the two places. France and Texas are both about the same size, fiercely independent, and are both growing larger-than-life grapes and people. And T.V. Munson was one of those giants.

Alfonso Cevola is the Italian Wine Director for the Glazer’s family of companies, based out of Dallas, Texas. Alfonso is a Certified Specialist in Wine and a Special Contributor to the Dallas Morning News and The Sommelier Journal. His wine blog is On the Wine Trail in Italy, posting every Thursday and Sunday. He also recent began another blog, called The Blend, covering wine and spirits.