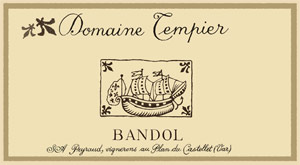 In principle, I object to a wine world so starkly divided, but I’d be lying if I said I didn’t occasionally resort to the use of these labels and the generalizations they imply to make a point.

I certainly can’t deny, especially while standing in a stone-walled vineyard that has been farmed by people with the same last name since before the United States even existed, that such places have a depth of history, tradition, and identity that is entirely absent (or at least purely nascent) in America or the other places we commonly refer to as the New World of wine.

For me, one of the icons of such deep history and tradition in the European wine world can be found in the heart of a region whose very name conjures a rich landscape and a lifestyle that are both legendary: Provence. In this land of lavender and thyme, rolling hills, and incredible cuisine, the wine estate called Domaine Tempier might easily be the archetype of the Old World winery.

Writing about Domaine Tempier isn’t the easiest thing to do, if only because any effort to do justice to this winery and its history must both reference, and be compared to the eloquence of Kermit Lynch, the importer who is responsible for bringing their wines to the US and who wrote about them in his wonderful book Adventures on the Wine Route

So, rather than attempt to write about a place that I have not been myself, let me share with you some of what Lynch has to say about Domaine Tempier and its home in Bandol, the wine region which takes its name from a little tourist town on the Mediterranean coast.

“Domaine Tempier is a place in Provence, a home with its winery and vineyards, its olive trees and cypresses. It is home to a large joyful Provencal family. It is a wine. And while it must be inadvertent, one of those fortuitous miracles that embellish existence (there is no recipe for it dispensed at wine school), there is a certain vital spirit that one imbibes with each gorgeous swallow of Domaine Tempier’s wine.”

What Lynch manages to capture so eloquently here, and in the rest of the chapter in his book which he dedicates to this Domaine, is the energy, history, and the cumulative experience that is embodied in this family-run establishment that can claim single-handed responsibility for the creation AND preservation of the appellation of Bandol.

I won’t attempt to retell everything in the book, but it is important to know that the entire family is involved in only the business of their wine, with vineyard management and winemaking split between the two sons of the family, each having naturally gravitated towards the area that most suited him.

Domaine Tempier grows its grapes in a traditional manner that may best be described as painstaking. Their vineyards, terraced into stony hillsides, are so steep and narrow that the family’s tractors need roll-bars to avoid certain death should they topple down the hill. Filled with old, old vines of Mourvèdre, Cinsault, Carignan, and Grenache, along with some white grape varieties, these vineyards yield microscopic amounts of fruit each harvest. They are farmed with no herbicides, no irrigation, weeding by hand, and their only fertilizer every year is the hand sown remains of the must (grape skins, seeds, etc.) from the previous year’s vintage

When it comes to winemaking, no commercial yeasts are used in the production of the wine, and in a remarkable showing of patience and winemaking tradition, the wines are allowed to finish their fermentation naturally, no matter how long it takes. Lynch relates in his book that the 1971 vintage took a staggering four years to finally ferment to dryness. Any other modern vintner (perhaps anyone with a shred of sanity) would have inoculated the wine with some additional yeast to complete fermentation, and in doing so, at least according to the Tempier family, would have ruined the wine.

Such is the mindset, and the devotion, that goes into every bottle produced by the family and, frankly, it shows. I adore all of the wines produced by this estate, but perhaps none so much as their rosé which I use as the benchmark for every pink wine I drink. All of the wines, but especially the reds age beautifully. Or, as some might say, they are truly ageless, improving for decades and lasting many more.

I recently had the opportunity to taste much of the most recent vintage from Tempier, including, for the first time, their white wine, which was wonderful.

Full disclosure: I received some of these wines as press samples.

2007 Domaine Tempier Blanc, Bandol, France
Pale gold in color, this wine has a beautiful nose of citrus juices, cut grass and lime zest aromas. In the mouth it is beautifully balanced, with great acidity yet also nice richness of texture and weight that carries a swirling mix of pear, gooseberry, and other grassy, herbal flavors across the palate into a fantastic finish. Truly lovely. A blend of 58% Clairette, 19% Ugni Blanc, 19% Bourboulenc, 4% Marsanne. Score: between 9 and 9.5. Cost: $39. Where to buy?

2007 Domaine Tempier Rosé, Bandol, France
Palest peach colored in the glass, this wine has a bright, stony nose of roses, rosehips, and other floral and mineral aromas. In the mouth it is explosive in its crispness with zingy, juicy flavors of rosehips and redcurrant supported by a steely undercarriage of wet stone minerality that slides around the mouth and lingers through a long finish. As usual, outstanding. A blend of Mourvedre, Grenache, Carignane, and Cinsault. Score: around 9.5. Cost: $32. Where to buy?

2006 Domaine Tempier Rouge, Bandol, France
Dark garnet in the glass, this wine has a rich nose of well-oiled leather, mulberry and cassis flavors tinged with green herbs. In the mouth the wine is mysterious — gorgeously velvet in texture with a melange of flavors that is difficult to describe: a mix of wet earth, mulberry, thyme, and wet stone that are blended together into an obsidian smoothness. Lovely. A blend of Mourvedre, Grenache, Carignane, and Cinsault. Score: between 9 and 9.5. Cost: $39. Where to buy?

2006 Domaine Tempier “La Tourtine,” Rouge, Bandol, France
Dark garnet in color, this wine has a nose of wet green wood, black cherry, and green herbs. In the mouth it is tart and taut with cassis, green herbs, and cedar flavors with moderate tannins and a long finish of sandalwood and oregano that turns a little bitter. Mostly Mourvedre with some Grenache, Carignane, and Cinsault.Score: around 9. Cost: $55. Where to buy?

2006 Domaine Tempier “La Migoua,” Rouge, Bandol, France
Dark garnet in color, this wine smells of roasted meats, green herbs, mulberries, and black cherry. In the mouth the wine is bursting with mulberry and black cherry fruit, and shot through with aromatic garrigue aromas that intertwine with the velvety tannins that linger in the finish. Mostly Mourvedre with some Grenache, Carignane, and Cinsault. Score: between 9 and 9.5. Cost: $60. Where to buy?

2005 Domaine Tempier Rouge, Bandol, France
Medium to dark garnet in the glass, this wine has a deep nose of currant and leather aromas tinged with a little grapeyness. In the mouth it is deep and rich with grippy tannins and a core of black currant, leather, and wet dirt flavors that are rimmed by tart cherry qualities that linger into the long finish. A blend of Mourvedre, Grenache, Carignane, and Cinsault. Score: around 9. Cost: $45. Where to buy?

In addition to the above wines, the Domaine also produces two other designated bottlings, named Cabassaou(usually their most expensive wine) and Cuvee Speciale.