Notes from the Al Fresco Tasting at IPNC 2009 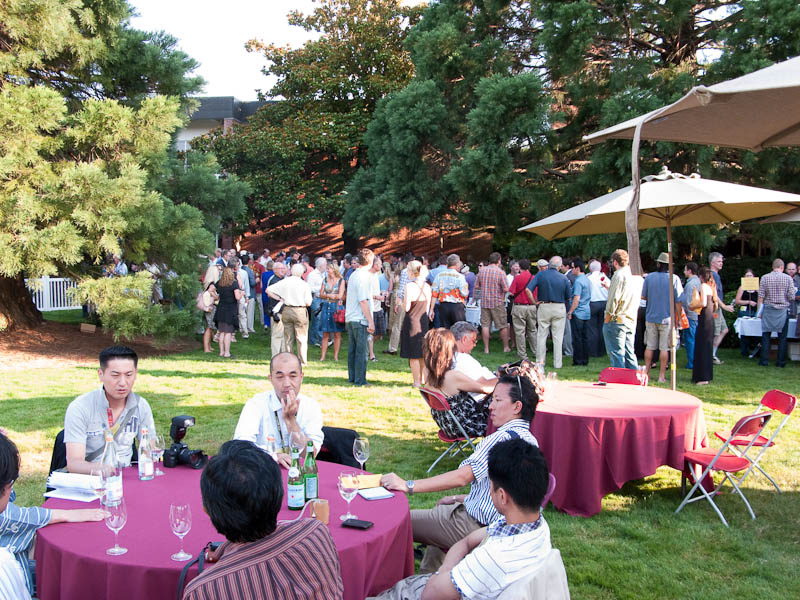 I go to a lot of wine tastings, and have come to really appreciate those that are done right. It may not be immediately apparent how easily a large public tasting can be screwed up, but all it takes is one small thing to make it a really miserable experience. For instance, a lack of spit buckets has turned more than one big tasting event into a nightmare. The spacing of the tables, the labeling of the stations, the number of wines available, the availability of water, the offering of food, the temperature of the building — these can all make or break a tasting.

Some of my favorite wine tasting experiences have been at the International Pinot Noir Celebration, which holds what they call Al Fresco tastings every afternoon on the shaded terrace of a building at Linfied College in McMinnville, Oregon. While it is often quite warm at these tastings, nearly everything else is perfect. There are only about 30 wineries pouring, and each only pours one or sometimes two wines, making it very easy to taste everything without a rush. The wineries are well supplied with ice to keep their wines at the right temperature. The tasting isn’t horribly crowded, and all the tables are staffed by the winery owner or winemaker, allowing for easy chatting and discussion with folks about their wines if that’s your thing.

And my favorite part? Since it’s outside, you can just spit on the lawn. I hate queuing up for the spittoon at these tastings about as much as I hate carrying around my own personal spit cup (along with my notebook, my pen, and my wine glass). I find it such a luxury if I’m not standing with a clear path to a spittoon, to simply lean over, check for cross traffic, and spit the wine onto the ground wherever I might be standing. And the lawn loves it.

The wineries pouring at the IPNC tastings are always a mix between Burgundy producers and New World producers, with more of an emphasis on the latter. The wineries that pour are not simply anyone that’s willing to pay, as with most other big wine tastings. Rather these are wineries that submit their wines and an application to a judging panel who taste, and decide which wineries to invite each year, presumably with the idea of making sure the wines are high quality, and from a diverse set of producers. One winery I talked to said they had been trying to pour at the tasting for about 10 years and finally got there.

In short, these tastings are some of my favorite moments at the IPNC festival every year, not only for the pleasure of tasting in an environment that is so perfectly set up, but also to get a sense of how the current vintage is shaping up. Granted, I’d prefer that I had access to about three times more wines in order to make that assessment, but I make do with what I’ve got. I had the opportunity to preview both the 2006 and 2007 vintages of Pinot Noir from Oregon, and despite having fewer of them I have to say I think I prefer the 2007s. They seem to have slightly more acid along with brighter, cooler fruit.

2007 was reputedly a difficult vintage for many, and it has been bashed by some mainstream wine publications as being quite bad, but the few wines that I tasted were encouraging.

Here are my scores for the wines tasted. I did not get retail prices for these wines as I normally do. Apologies for that oversight. I’ve provided links to look up prices for some of my favorites that are currently on the market (most of the 2007s have yet to be released).

This list represents every wine poured at the two tastings.