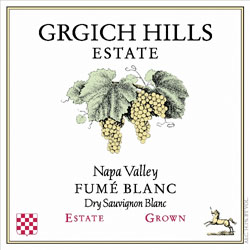 Visitors to Napa Valley, even those on their first trip, have a hard time missing the Grgich Hills winery, which sits prominently on the west side of Highway 29, its flower beds almost pushed right up against the edge of the blacktop.

Of course, when the winery was established in the late 1970s there was a lot less traffic on that same highway, and founder Miljenko “Mike” Grgich was a young man. But despite his youth, this Croatian-born immigrant did not lack for experience or acclaim. Indeed, it was partly based on his success as the winemaker for the 1973 Chateau Montelena Chardonnay which performed so well at the famous 1976 Paris Tasting that Grgich, his friend Austin Hills, and Austin’s sister Mary Lee Strebl chose to begin what has become one of Napa’s most frequented wineries.

Grgich Hills attracts a lot of visitors by virtue of its location on the beaten path, so to speak, but even if it were tucked away in some cranny of the valley, there would likely be a steady stream of traffic to its doors simply for its reputation as a consistent producer of well-priced wines of good to excellent quality.

Increasingly the winery draws traffic for another reason: its recent move to 100% estate grown, biodynamic fruit, processed in a facility run 100% on solar power. Grgich, who is now in his 80’s but still makes every wine and oversees operations at the winery, along with his nephew Ivo Jeramaz, who most actively manages the vineyards, were some of Napa’s earliest converts to Biodynamics, the increasingly popular farming regimen which is based on the teachings of Rudolph Steiner. Though the initial move to Biodynamics was simply a decision based on the assessment that it produced higher quality fruit, Grgich Hills has embraced its emphasis on sustainability, a move which pays dividends of many kinds, including the ability to market themselves as such, to the pleasure of a growing population eco-conscious consumers.

Like many proponents of Biodynamics, Jeramaz and Grgich maintain with incontestable conviction that they are making better wine as a result, and that’s pretty hard to argue with, no matter what misgivings I have about some aspects of the regimen. These guys, along with other prominent Biodynamic winemakers, certainly know “better” wine when they see it.

Now in its 30th year, Grgich Hills makes a well known and widely regarded Chardonnay, a Merlot,, Zinfandel, Cabernet Sauvignon, this Sauvignon Blanc, and in some vintages, a dessert wine that blends Chardonnay and Riesling. Total production currently sits at slightly less than 70,000 cases, of which this wine, which is called Fumé Blanc in the tradition established by Robert Mondavi, makes up about 12,000 cases.

In an interesting side note, in recent years Grgich has also started a winery back in Croatia, which forms a base for his prominent role in helping to promote the quality and long tradition of the region’s winemaking.

Despite being produced in substantial quantities, this wine is made in very old-school fashion, and quite differently than most Sauvignon Blancs in Napa. The fruit comes from the estate’s cool-climate, Biodynamically-farmed vineyards in Carneros and American Canyon. After sorting and destemming, the fruit is fermented in a combination of neutral French oak barrels, and huge 900 liter French oak tanks. After fermentation it is transferred to neutral oak barrels where it ages for about 8 months before bottling.

The results of both excellent fruit sources as well as fermentation and aging in neutral oak make this wine a wonderful balance between the crisp qualities that make Sauvignon Blanc so wonderful, along with some deeper substance that makes the wine command some attention. I’ve had many, many vintages of this wine, and I believe this to be the best I’ve tasted.

Tasting Notes:
Light gold in the glass with hints of chartreuse, this wine smells of tart unripe apples and citrus zest. In the mouth it is explosively zingy, with crackling acidity and bright pink grapefruit, lemon zest, and unripe apple flavors that linger in a nice finish. Dynamic and refreshing. One of the better examples of the form from Napa.

This wine would ordinarily have been released by now, but with the economy as it is, it hasn’t hit the shelves yet. The winery is no doubt waiting to let some of the remaining 2007s sell. Keep an eye out for it.