Yet Another Wine Column Casualty in the Newspaper Business 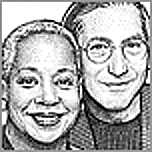 Wall Street Journal wine columnists John Brecher and Dorothy Gaiter have quietly announced their departure. Their Christmas Day column, the 579th piece they have jointly penned together, will be their last at the Journal.

This unannounced departure of the unique husband and wife wine journalists represents yet another brick falling from the crumbling wall of professional wine journalism. The word on the street suggests that while the Journal has no intention of discontinuing its wine coverage, this was a layoff along the lines of so many that have occurred in the last 18 months. In short, the Journal wants to pay only a single salary instead of two very expensive ones.

It’s not hard to understand the priorities of the business, especially in an environment of increasing desertification of print advertising. But if the paper can’t be criticized for this cost cutting measure, we can certainly bemoan the circumstances that led to it, as well as the loss of two unique voices in the world of wine criticism.

While I must admit that I often wondered at the seeming mismatch between Dottie and John’s style of wine criticism in contrast with the Journal’s more staid and precise tone, I adore the duo’s philosophy when it comes to wine drinking, which they quite beautifully summed up in their final column.

The wine world still suffers from too much stuffiness, and Dottie and John cut through that in many ways, from their steadfast use of their personal rating scale (from Yuck to Delicious!) to their concept of Open That Bottle Night, where readers were encouraged to stop saving that “special bottle” for an occasion that never comes.

More than anything, Dottie and John achieved a rare feat in journalism, at once holding the roles of critics, yet remaining perfectly accessible to and empathetic with their readers. Their columns were quite personal in ways that few columns of any kind are, in or out of the wine world. Their joint memoir Love by the Glass, which I’ve reviewed here on Vinography, provided even more of the same.

I’ve spoken more than once on panels with titles that were some variation on “The Future of Wine Writing” but I don’t have any powerful answers for where things are going. All I know is that things are changing fundamentally, and that the future won’t look anything like the past.

Here’s hoping that future has room for voices like Dottie’s and John’s, else they and many others will be missed.