Book Review: In Search of Bacchus by George M. Taber 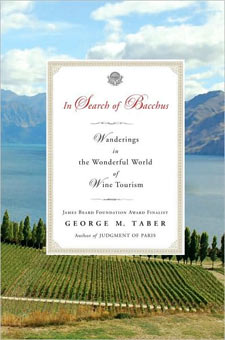 Great travel writing should do more than simply paint a picture of distant locations and suggest how they may be experienced. At its best, the travelogue should transcend its itinerary and offer a deeper, more meaningful narrative than one might expect to experience themselves should they find themselves in the writer’s footsteps one day.

George Taber’s new book, In Search of Bacchus: Wanderings in the Wonderful World of Wine Tourism, ultimately fails to satisfy. That the book should be so ordinary and uninspiring was a huge surprise given the tremendous enjoyment I got out of the author’s previous two works, The Judgment of Paris and To Cork or Not To Cork. Taber is a gifted writer and researcher, but this latest book, which recounts his travels to the “twelve most beautiful and fascinating wine producing regions around the globe” in the space of a year suggests he may be a better historian than adventurer.

It may be that In Search of Bacchus simply works better in theory than in actual practice. The idea of taking one of the world’s foremost wine journalists and sending them around the world as a wine tourist seems like it might be viable as a means of generating a good story. But in execution, the book really doesn’t come off well, and it reads like a project that was forced to become a book, rather than a story (or series of stories) so good they had to be told.

This awkwardness surfaces in the very first few pages of the prologue, which profiles a rich a venture capitalist and wine nut named Ed Zimmerman. The sole purpose of these first five pages seems to be proving to the reader that people get really passionate about wine, and providing an opportunity to evoke the name and spirit of Bacchus, the Roman God of wine, in search of which Taber supposedly spent his year of travels outlined in the remaining chapters of the book.

Most of those remaining chapters’ titles begin with the phrase “Diary of a Wine Tourist” which I suspect may have been the original (more accurate, and probably too-boring-for-his-publisher) name for this manuscript. These installments, each corresponding to one of the twelve regions that Taber visited, are filled with clear, technically well written prose, relevant facts and histories, profiles of individual wineries, recommendations for the better wines he drank, and generally very little excitement, drama, passion, or profundity.

In all the travel writing I’ve ever read, it seems that authors have a choice to make in their role in the story. Either they set themselves up as a lens trained on the world and use their talents to paint that world evocatively in a way that transcends the place they are describing, or they themselves become a character in their own story, and we as readers get to learn as much from their reactions, emotions, and passions as we do the situations in which they find themselves. Somehow, Taber seems to have done neither in this book. He appears as a character, relating his experience in the first person, but other than a few exceptions like his bungee jumping experience in New Zealand or frustrating attempt to blend a wine, for the most part he’s just a pronoun that moves from situation to situation.

Perhaps not surprisingly, the book’s most satisfying moments are those when Taber shifts into a more expository zone to chronicle the early days of Robert Mondavi’s pioneering rise to prominence in Napa or the geography and political history of Chile. Each of the wine regions is introduced with a more expository chapter that is followed by another relating Taber’s actual experiences visiting the region. These regionally focused chapters are the ones that contain the most compelling writing, but many end up being mostly short profiles of different wineries and businesses that provided Taber with hospitality and services along the way.

The last two chapters are by far the best of the book, and they provide an interesting portrait of the history and current state of the winemaking in the Republic of Georgia, as well as a short description of Taber’s participation in a supra or feast after cracking open a fresh batch of wine. Georgia is regarded by many historians as the best candidate for the birthplace of winemaking, and the region’s traditional methods of making wine in big clay amphorae buried up to their necks in the earth are fascinating.

But even these interesting chapters suffer from the general lack of energy that characterizes the whole book. Harsh it may be, but the book comes across as simply tired — somehow missing the passion and excitement that might actually inspire the reader to visit these regions and try to follow in Taber’s footsteps. Taber unquestionably possesses great skill as a journalist, but it is unfortunately not as evident in this project.

George Taber, In Search of Bacchus: Wanderings in the Wonderful World of Wine Tourism , Scribner 2009, $19.80, (Hardcover).