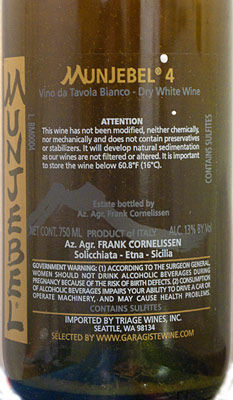 Many of the world’s greatest wines are also the most unlikely. Unlikely because most sane, rational, educated, and professional winemakers wouldn’t be caught dead making wine in some of the strange ways and places that yield the truly exciting.

It takes a strong vision, or as some might suggest, a special breed of insanity to break all the rules of modern winemaking and winegrowing, but those who break such rules often follow their passions across the border without a moment’s thought to the uncharted territory they are exploring.

High on the slopes of one of the world’s most active volcanoes, Frank Cornelissen nurtures a few acres of vines to produce some truly astounding wines that tend to leave wine lovers shaking their heads in either respectful awe or confused disgust.

I’m in the first camp. Cornelissen is one of the world’s greatest iconoclastic winemakers.

Born in Belgium, Cornelissen fell in love with wine as a young man, and eventually began a career as a wine sales representative that led him to the single defining moment of his life: his first taste of a wine made from grapes grown on Sicily’s Mount Etna. I’ve not had the pleasure of meeting Cornelissen, so I haven’t had a chance to ask him what he tasted in that fateful sip, but presumably, he tasted a terroir that spoke to him in a way that no other had before. Within little more than a year of that taste of wine, despite lacking any formal training, he had become a winemaker.

At first he rented some vineyards on the slopes of the volcano, but soon thereafter (2001), he purchased several small vineyard plots and other sections of land which he would plant himself. One of these plots may be one of the world’s most unique vineyards — a roughly three-acre plot of own-rooted vines that pre-date the Phylloxera epidemic that wiped out most of Europe’s vineyards. These near 140-year-old vines sit at about 3000 feet of elevation on the flank of Mount Etna. In the winter, they are buried under more than six feet of snow. During the summer they sweat through 100+ degree days, followed by nights that can dip down to below fifty degrees. The scraggly, head-pruned vines (using no trellises or supports for the vines) sit low to the ground and sink their roots through the shallow soil into nearly solid volcanic rock. Rock that was not so long ago, and may become any day again in the future, molten lava. Many of these vines yield only a single bunch of tiny berries, resulting in yields per acre so miniscule as to be nearly commercially non viable.

Cornelissen’s farming methods make even biodynamic winegrowing seem unnatural. He adds nothing to his vineyards. No compost, no manure, no water, no copper, no sulfur, no herbicides, nothing. In between his rows and blocks of vineyards he has planted native fruit and nut trees, buckwheat, and wildflowers. Every vine is carefully pruned and managed throughout the growing season, and harvest is done on a vine by vine level, resulting in many multiple passes through the vineyards over the span of days.

Eschewing any and all additions to his wine, including sulfur even at bottling, Cornelissen practices a form of “natural” winemaking in the extreme. The wines are fermented with ambient yeasts either in big plastic tubs in his front yard, or in buried terra cotta amphorae in the style of Josko Gravner from Friuli. The white wines (really orange) macerate for weeks, even months, on their skins, as do, in some cases, the reds as well. The wines are bottled without fining, filtration, or in some cases, even racking of any kind. As a result both reds and whites have a lot of beautiful, fine sediment, and some are just downright cloudy.

This particular wine is a blend of the varieties Grecanico Dorato, Coda di Volpe, Carricante and Cataratto. The grapes were mostly destemmed and crushed by foot. The juice stayed in contact with the skins for some months (I’m unclear how many) in plastic tubs before being transferred to tank for about five months before being bottled, without once being treated with sulfur dioxide.

Because of this lack of sulfur, Cornelissen’s wines are quite delicate, and anecdotally there seems to be a lot of bottle variation among the wines. To avoid such issues, Cornelissen suggests the wines always be stored and transported below 60 degrees fahrenheit.

Like many other orange wines, this one benefits greatly from at least a day’s worth of decanting in advance of drinking.

Tasting Notes:
Cloudy orange in the glass with noticeable clumps of sediment, this wine has a nearly otherworldly nose of orange oil, roasted nuts, ranier cherries, and pine sap. On the palate it has a wonderful texture that includes the light powdery quality of the sediment. Searing acidity that mellows as the wine opens to the air makes lively flavors of sarsaparilla, cloves, and a woody pulpy quality that morphs into a coffee-with-milk-flavor in the finish. This utterly compelling wine may freak some people out, but that’s OK, there will be more for the rest of us who know a great wine when we taste it.

Food Pairing:
I drank this wine with a good friend and a meal of basque specialties, and found the wine a fantastic accompaniment to everything from sardines in olive oil to oxtail croquettes.

Unfortunately these wines can be tough to find. My primary source has been Garagiste in Seattle. This particular wine is not for sale on the internet, but a more recent vintage is available. Note that the wine’s name is sometimes spelled Monjebel, which was the original spelling in the first couple of vintages.