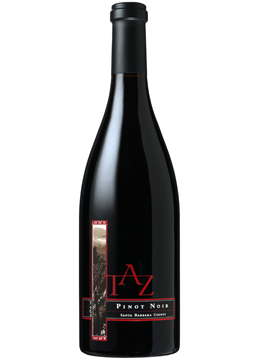 The good $15 Pinot Noir is the unicorn of the California wine industry. A mythic beast, highly sought after, no one is actually sure whether it exists or not. I’m always on the lookout myself, as it’s one of the most frequent questions I get asked when people find out I review wines.

Consequently, whenever I do come across something that comes close, I feel almost obligated to share the find. It’s been some time since I visited the wines made under the brand TAZ, but a couple of bottles arrived recently and went into the tasting lineup and they showed extremely well.

TAZ is one of the many wine brands that are part of wine and spirits conglomerate Fosters USA. Originally a part of the Beringer-Blass portfolio, it has been subsumed, like many others, in the wave of consolidation that has swept through the California wine world in the last five or ten years.

The wine brand is named after winegrower Bob “Taz” Steinhauer, who earned the nickname due to his resemblance to a certain cartoon character. Despite being part of one of the world’s largest wine corporations, the TAZ brand is operated with a certain degree of independence. The wine continues to be made out of a winemaking cooperative in Santa Barbara, under the guidance of winemaker Natasha Boffman, who took over from the original winemaker John Priest in 2005. Boffman’s prior credits include winemaking stints at Stags’ Leap and Meridian Vineyards as well as some time spent down under in Australia’s Coonawarra region.

The winery produces several wines from Santa Barbara County, Steinhauer’s stomping grounds, with a special emphasis on Pinot Noir from several sites, including Steinhauer’s most well known property, the Fiddlestix vineyard (which sites next to the well known Sanford and Benedict vineyards).

This particular wine is made from fruit from the North Canyon Vineyard in the Santa Maria Valley, as well as the Fiddlestix vineyard in Santa Rita Hills. After destemming and fermentation, the wine is aged in French oak barrels of which about 25% are new.

Tasting Notes:
Light to medium garnet in color, this wine has a nose of sweet cranberry fruit. In the mouth it is beautifully soft and juicy with cranberry and raspberry flavors that stay lively thanks to good acidity and very judicious oak. Not incredibly complex, but hard to dislike in all its bouncy juiciness. Delicious.

Food Pairing:
This wine showcases its fruit beautifully, and will complement anything earthy and savory I think. I’d love to drink it with mini chicken pot pies with bacon and marjoram.