Champagne, Advertising, and the Problem with Principles 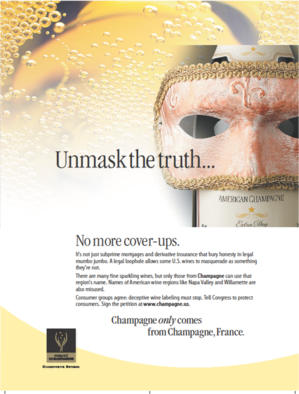 They follow me everywhere I go. On the commute to work, in my favorite magazines, even on the web sites that I frequent. Everywhere I turn I’m being exhorted, admonished, and educated to umask the truth.

For whatever reason, I’m clearly the target demographic for what is obviously a massive advertising campaign by the Champagne Bureau, a U.S.-based organization whose charter is to “educate American consumers about the uniqueness of the wines of Champagne and expand their understanding of the need to protect the Champagne name in the United States.”

These ads have become so prevalent in my daily life as to be annoying. Every time I visit the New York Times website, every time I open my New Yorker magazine, and every day on my commute home, I see the same image.

But in the midst of my annoyance I got to thinking: what exactly is the problem they’re trying to solve here, and why do they think that me and my fellow liberal, upper-income, San Francisco and New York citizens need educating? Sure, there are probably some producers in the United States who are still using the word Champagne on their labels, but how big a problem is that really, when the U.S. Government and a number of our wine regions have had a signed agreement since 2006 making it illegal to use the word Champagne (among others) on any new label?

The Champagne Bureau claims that 50% of the sparkling wine sold in the U.S. is mis-labeled as Champagne. This is a statistic based on something called the Gomberg Report, which is a set of market data collected by Gomberg, Fredrickson, and Associates. Unfortunately both Gomberg and the Champagne Bureau refused to share any of that data with me, or sell me a version of their report (Gomberg told me they screen all purchase requests to make sure the report isn’t bought by journalists) so apparently we have to take them at their word. Which is not something I’m particularly excited about.

My first stop in trying to validate or even get some perspective on this number was the government’s COLA database of approved wine labels. Between when records start in 1981 and 2004 when the last such label was approved, there were only 104 American-made sparkling wine labels ever approved in the United States with the word “Champagne” in them. Unfortunately, the government’s database does not tell us which labels are still in use commercially, but it is clearly a tiny fraction of that overall number.

To get a sense of how many wines really do still use the word Champagne on the label, I did some trolling around the Internet’s largest sellers of wine. Sadly, I have no visibility into the country’s two largest wine retailers, Costco and Wal-Mart, but Beverages and More carries 16 sparkling wines made in America that have the word Champagne on their label, with the majority from Korbel, Andre, J. Roget, and Cook’s brands. Wine Library carries 11 American Sparkling wines from the same suspects. Wine.Com carries none, and practically every other specialty wine retailer that I know of carries none as well.

The reason that most major wine shops don’t carry these wines? The average price point for a bottle of American sparkling wine with the word “Champagne” on the label is $8.21. The most expensive is $18.99, and the least expensive is $1.99. The majority cost between $4 and $7.

Certainly Korbel, and J. Roget (which is owned by Constellation Brands) must crank out a lot of wine each year, but could they and the few others that were grandfathered in under the 2006 agreement (no new labels were permitted, but already approved labels were allowed to keep the word Champagne on them) really make up 50% of all the sparkling wine sales in America?

I suppose it’s plausible, but the more I looked into the problem of American “Champagnes”, the more I began to think to myself how little it mattered what the actual sales volumes of these wines were. Not a single one of these wines would ever compete with real Champagne in the marketplace, and frankly very few of the people buying these wines would even consider buying something four times the cost, no matter where it came from. The cheapest Champagne I could find for sale anywhere in the United States is $20.78 (at one retailer), and the average price (not actually calculated by me) among the 1601 different Champagnes that Wine Searcher shows as being sold in the United States seems to hover around $40.

When I asked the folks at the Champagne Bureau whether their campaign to unmask the truth was based on a concern over market-share or purely based on principles, their quote generator cranked out this official statement for me:

“The issue of misleading wine labeling is first and foremost a consumer right’s issue. Especially in this tough economy, consumers have a right to know that when they spend money on a bottle labeled “Champagne” they are getting what they pay for. More than 50 percent of the U.S. sparkling wine market is mislabeled as “Champagne,” even though the grapes used in those wines do not originate in the Champagne region of France.”

Which is a really boring way of trying to sound like consumer advocates while essentially saying, it’s not a question of competition, it’s a question of principle.

So let me just say this: I agree with the principle. Place names are important, and should be both respected and protected.

But given that the people who happen to be buying $5 bottles of sparkling wine made in America with the word “Champagne” on the label are most likely never, ever, going to be buying a bottle of true Champagne, what, exactly is the point of a million dollar ad campaign that is ostensibly about educating these same consumers?

And isn’t it a complete waste of money to be pushing this message to the people like me who are actually LEAST likely to buy one of those $5 bottles?

Half of me wonders whether the whole thing isn’t aimed at consumers at all, but instead at the executives of the companies who still produce these wines, as those folks are pretty likely to live in San Francisco and read the New York Times like me. I’m sure it doesn’t escape the notice of the folks at Korbel that it’s one of their bottles of wine behind that mask.

I suppose this whole thing wouldn’t have gotten my knickers in quite so much of a knot were it not for one additional salient fact: Champagne, especially the good stuff, is really fucking expensive. My cynical side wonders how much cheaper Champagne might be if the region didn’t spend millions on such ad campaigns. In a recession where I’m seeing wine discounts starting at 30% off and rapidly driving down to 50% and 60%, most Champagne houses haven’t come anywhere near that level of discounting. Why is that?

If the folks in Champagne really wanted people to understand and appreciate how special their product is (and I really do believe it is special, and think everyone should drink a lot more of it) they might think about some ways of getting real Champagne into the hands of more consumers, instead of throwing millions of dollars away on advertising campaigns that I believe ultimately aren’t going to produce any more Champagne drinkers.