Glass Wine Bottles Strike Back. In the Wrong Direction. 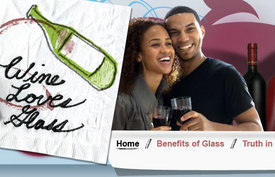 It’s not every day I get the opportunity to display my inner cynic. But I’m still cackling at the little bit of fear mixed with preemptive aggression that manifested today in the form of a web site called Wine Loves Glass.

Those who spend time in wine circles know a lot about the “threat” to posed to natural cork producers by the proliferation of alternative closures. In the face of shrinking market share and demand for their product (read: threat to their income streams) they’ve been striking back with a multi-pronged offensive, covering every base from carbon footprints to endangered species protection to the sheer lack of romance in a screwcap.

Who knew that the glass bottle industry was under such an equally imminent and pernicious threat? But of course, if you think about it, the reality is quite dire. Glass bottles are at least indirectly responsible for the biggest component of wine’s carbon footprint: heavy glass bottles require a lot of fossil fuel to move around the planet.

Everyone in the wine business that has half a brain has been looking to reduce their carbon footprint, if only to be able to tell their prospective customers that they are, and for many that means moving to lighter glass bottles that contain less…. glass.

That, combined with mainstream wine consumers’ resurgence in interest in more environmentally friendly and convenient packaging like bag-in-box and Tetra-Pak (think: kids juice cartons) must have the glass industry a little rattled. Or would that be “shattered?”

Enter WineLovesGlass.Com, where you can subject yourself to the desperate public relations pleas of an industry scrambling to regain some market share. Or perhaps less cynically, an industry trying to convince people that glass isn’t all that environmentally problematic. Witness the fabulously named “Truth in Packaging” or “Benefits of Glass” sections of the site, where in neatly composed prose you can learn that glass is superior in every way to every packaging method ever invented, or ever to be invented.

Now I’m no carbon footprint, environmental, or materials scientist, so I can’t critique the claims they’re making on the web site on those fronts, but I have to chortle at how glass bottles are compared with bag-in-box packaging: “Boxed wine is also not hermetically sealed, drastically limiting its shelf life. Wine in glass on the other can be preserved for any amount of time – allowing you to drink the wine of your choice days, months or even years after it’s been purchased.”

Um, where to begin? How about with the definition of hermetically, which means airtight, and which doesn’t describe a single bottle of wine ever made, considering they all come with a big hole in the top that is normally sealed (and almost never hermetically) with something that the glass industry doesn’t produce at all. Not to mention the fact that no one ever attempts to age wines sold in boxes, and that for the average wine consumer, a bag-in-box wine will last them much longer than wine in an opened bottle, because the (ahem) vacuum-sealed bags reduce the wine’s exposure to oxygen.

I don’t doubt that many of the facts and figures leveled in service of defending the glass bottle on this web site are true, from glass’ ability to be recycled completely, to the amount of energy required to produce a bottle. But couched in ridiculously patronizing language like “Glass vs. Polyethylene Terephthalate (PET/Plastic): It’s a Matter of Safety” or “Glass vs. Multi-Layer Cartons: It’s a Matter of Responsibility” underneath animated montages of happy, beautiful, appropriately multi-ethnic people enjoying wine from bottles? Excuse me while I throw up a little in my mouth.

This web site is a complete waste of money in my opinion, no matter how much fun some PR firm and design agency had making it. A huge swath of wine consumers would never buy wine in alternative packaging because none of the wines they want to drink come in such containers. A whole other segment of the population have tried wines in alternative packaging and come to the justified conclusion that 99% of the wines that come in such packaging are positively awful. And then there are the rest of the folks that are content to buy wine in boxes and bags and cans, half of whose minds can’t be changed and the other half of whom Fred Franzia’s Two Buck Chuck convinced to switch to wine in glass bottles anyway because they feel all “upscale” while doing it.

How about pouring this money into research to reduce the environmental impact of glass manufacture and recycling even further? How about funding some hot-shit materials scientists to come up with lighter, stronger glass that can weigh less but still look solid enough to be used by the classiest wines who want to maintain their image but reduce their carbon footprint? Or best yet, start lobbying the wine industry to use those nifty glass stoppers that I think are the best thing to happen to the wine industry in a long time, and the potential long-term replacement to cork (if there ever will be such a thing).

Like the campaign against the use of Champagne on American wine labels I lambasted last week, this is yet another example of an industry thinking defensively instead of creatively.