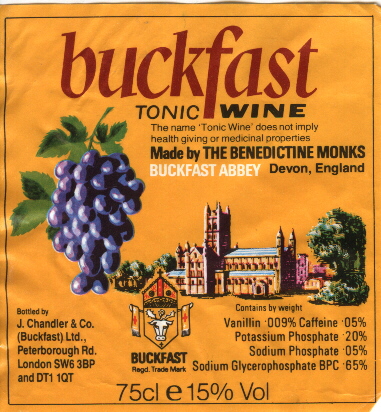 Not ordinarily known for their wine or wine drinking habits, the Scots have recently been making news in the world of wine.

Who knew that one of the most popular beverages among Scottish criminals was wine? Specifically, Buckfast Tonic Wine, a (rather unholy, if you ask me) concoction of wine, sugar, caffeine, and other additives that make it a bit more like Red Bull than wine. Often called “Wreck the Hoose Juice,” according to to the New York Times:

“In a survey last year of 172 prisoners at a young offenders’ institution, 43 percent of the 117 people who drank alcohol before committing their crimes said they had drunk Buckfast. In a study of litter in a typical housing project, 35 percent of the items identified were Buckfast bottles. And the police in the depressed industrial district of Strathclyde recently told a BBC program that the drink had been mentioned in 5,638 crime reports between 2006 and 2009 (the bottle was used as a weapon in 114 of them). “

Perhaps this is not exactly what the Benedictine Monks who make the stuff had in mind when they came up with the idea. But then again, they do fortify it to 15% alcohol and put roughly 8 cans of Coke worth of caffeine inside.

Undaunted by fears of wine-induced crime waves in his part of Scotland, Chef Pete Gottgens is looking forward to this year being his first commercial crop of Riesling from the grapes he planted near the Ardeonaig hotel on the banks of Loch Tay.

The South African chef is hoping to get enough sun to ripen his grapes sufficiently to make a late-harvest dessert wine that he can serve at the hotel’s restaurant. Perhaps he’s betting on the global warming trends that have helped England’s burgeoning wine industry continuing to spread north.

If not, he may need to add some sugar, and caffeine, and come up with a catchy name the teens will love.