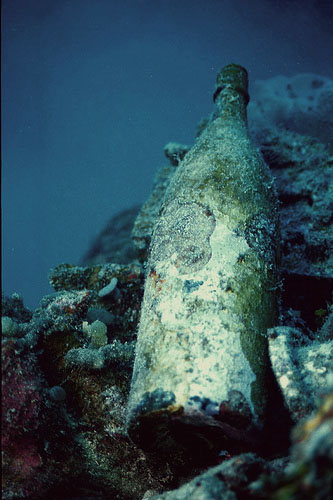 , a group of divers off the coast of Finland recently discovered a shipwreck they believe dates back to the late 18th Century. In the remains of the ship they found several intact glass bottles of wine, their contents still well preserved.

So what did they do? What any self-respecting wine lover would do.They drank some.

Believed to be Veuve Clicquot Champagne dating from between 1782 and 1788, the wine “had a very sweet taste, you could taste oak and it had a very strong tobacco smell. And there were very small bubbles” according to diver Christian Ekstrom.

While that isn’t much of a tasting note, it still sends shivers of delight down my spine. How cool would it be to taste such a piece of history? A champagne that is almost as old as America itself would certainly be one of the most amazing things you would ever have the opportunity to consume.

Before this find, the oldest vintage of Champagne that had been tasted in modern times was the 1825 vintage of Perrier-Jouet opened for wine experts and the press last year.

It’s not clear exactly how the determination was made that these were Veuve Cliquot, or what will happen to the 29 remaining bottles which presumably fall under the jurisdiction of the Finnish government.

Given the chance, I’d much rather have a sip of one of these bottles than an old claret that might have belonged to Thomas Jefferson. Anyone want to bet whether Bill Koch will get his hands on some?