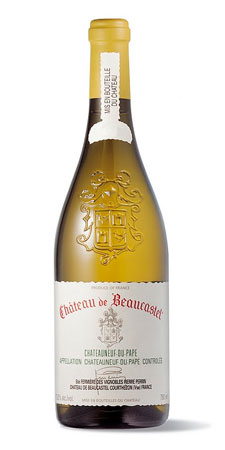 My love of deeply complex white wines has been growing for some time. I’m not sure exactly when I learned that there was more to white wine than Sauvignon Blanc and Chardonnay, but ever since then, I have been seeking out white wines, and especially white blends, that lean towards the profound.

I’d be hard pressed to pick a clear favorite among the bevy of beauties that fit the aforementioned description, but certainly one of the top contenders would be the white wines of the the southern Rhone Valley, and in particular this wine from Chateau de Beaucastel,

Known for its rich history, dedication to quality, and for the longevity and personality of its wines, the Beaucastel estate lies outside of the town of Courthezon, and has been run by the Perrin Family since the early part of the 20th Century. Under the hands of the late Jacques Perrin and now his two sons, it rose to greatness in the latter half of the century. The Beaucastel name goes back much farther than that (to the early 16th century to be exact) and the estate has been a prominent wine producer since the 19th century, but in the last fifty years it has produced some of the most profound and interesting wines from the Chateauneuf-du-Pape region.

Like many great wine producers, the Perrins have a singular vision for their wines which is not exactly “the standard approach.” For starters, Beaucastel is one of the few producers whose vineyards are still planted with all of the 14 allowable varietals that make up the legendary composition of red Chateauneuf-du-Pape wines. However traditional they may be in their devotion to the allowable vine varieties, the Perrins are decidedly iconoclastic in their own blend of these varietals, favoring a much higher concentration of Mourvedre in their wine than any other producer. While in most wines of the region Grenache is the highest percentage of the blend, in their standard wine the Perrins usually offer equal percentages of Grenache and Mourvedre (usually about 30% of each).

Chateau de Beaucastel farms all of its 272 acres (one of the largest estates in the Southern Rhone) organically and with an emphasis on cultivating the low yields of their old vines. Through a careful system of replanting, they miraculously manage to keep the average age of their vines around fifty years old, though some of their vines are between 60 and 90 years old. These older vines are used to produce some of the special cuvees made by the estate, including the one named after the late Jacques Perrin, which has become the flagship wine of the estate in the past couple of decades.

This wine highlights one of the estate’s greatest treasures: about 17 acres of old-vine Roussanne. Some of the Roussanne vines are more than sixty years old, with the rest being between 10 and 40 years of age. Much of the really old stuff goes into a special “vielles vines” cuvee of Roussanne that is bottled separately, but a small portion goes into this white, along with the younger fruit, and about 15% Grenache Blanc. About 5% of the wine is various other white grape varieties that the Perrin family declines to name, but which likely include Bourboulenc, Clairette and Picpoul.

After careful hand harvesting and meticulous sorting, the grapes are pressed immediately into tank and barrel. Roughly 30% of the juice is fermented in old oak barrels, while the remainder ferments in steel tanks. After fermentation roughly 50% of the wine is then aged in oak for 8 months before bottling.

I adore white Chateauneuf-du-Pape for its wonderful balance of more savory flavors along with brighter citrus and tropical fruit notes. When good, such as in this wine, it rivals top white Burgundy for complexity and profundity, and even in its finest incarnations, comes at half the price of the former.

Tasting Notes:
Light gold in color, this wine has a phenomenal nose of green olives, dried orange rind, and acacia honey. In the mouth, the wine’s satin texture and weighty presence on the tongue bring to mind the voluptuous curves and invisible brush strokes of nudes in Botticelli paintings. Flavors of orange zest, lemon curd, dried mango and dried pineapple swirl amidst a bright acidity and deep resonant minerality that leans towards the saline end of the spectrum. Both rich as well as light on its feet, this is a wine that begs to be swallowed, especially as it lingers for a long while after the fact. Outstanding.

Food Pairing:
This is one of the world’s most versatile food wines, and will match well with many things. I would love to drink it while eating some spice rubbed grilled quail and figs.