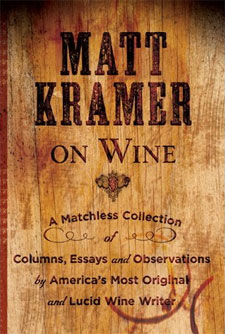 In contrast to his string of useful and successful Making Sense volumes — Making Sense of Wine, of Burgundy, of California Wine, etc. — Matt Kramer On Wine is a collection of short articles, written over the years for Wine Spectator, Decanter, and other publications. Rather than offering a sustained treatment of a single region or subject, this volume showcases Kramer’s three-decade mastery of the art of the truly interesting and intelligent wine column.

For those who have kept up with Kramer, the book can be the occasion for re-immersion; for those who haven’t, it’s an opportunity to get acquainted with one of the country’s most graceful wine writers and passionate advocates for fine wine. If you crave good writing, look no further; if you’re on the lookout for tips on hot new bargains in Central Coast Chardonnays, or self-important rants, look somewhere else.

The pieces in this collection range widely across regions, grapes, winemaking trends and techniques, controversies, and pet peeves. Among the common threads with which Kramer has always been identified are a fixation on the importance of low vineyard yields — long a problem in Burgundy, Kramer’s wine-spiritual home — and a distaste for obtrusive oak flavors and aromas. Periodically, he takes a swipe at Bordeaux, its pretensions, its commercial hammerlock. And, of course, there is compelling advocacy of the indispensability of terroir for the understanding fine wine.

The collection includes “The Notion of Terroir,” a landmark chapter from Making Sense of Burgundy, one of the most forceful evocations of the power of that concept in the English language. An entire section is devoted to writings about “somewhereness,” a term Kramer coined to distinguish everyday, mass-produced, beverage wine from the truly good stuff.

In “What Makes Wine a Landmark,” Kramer asks, “Isn’t taste what fine wine is all about? Nope. You’d think it would be, but it’s not so. Let me push this further: the purpose of fine wine is not to give pleasure, but to give insight. . . . The greatest wines literally mark the land for us. They tell us something about the earth that we could not otherwise know. This is their pleasure, an insight so intrinsic that it endures and repeats itself over generations. Everything else is just, well, taste.”

It’s not hard to find other wine writers who share many or even most of Kramer’s opinions; it’s tough to find anyone who makes these points in such artful and original ways. In “Tree Hugging,” one of many gentle polemics on the omnipresence of toasty oak, he bemoans the fact that producers in Italy’s Piedmont had started slathering on the oak to cover up Barbera’s trademark aroma: rubber. In “The Tyranny of Being Well Brought-Up,” the column that opens the collection, Kramer spends several paragraphs dissecting the French concept of bien élevé, being well brought up, and how it figures in culture and gastronomy, then slides into how the polish of oak is part of how French wines are raised in the cellar, and then into how the international fad for this kind of breeding is wiping out local traditions in places like Italy. This is way beyond “I hate oak.”

One more example of good writing, which is the reason for buying this book. The final piece is a hitherto unpublished profile of Angelo Gaja, the man who made Barbaresco famous, commissioned by the New Yorker but eventually rejected with a generous kill fee. Here we get Kramer on Gaja’s eyes: “They are Holy Roller eyes, the sort that can look out over a sea of sweating, expectant revivalists and transfix them by sheer conviction and fervor, as well as seduce them with playfulness. When combined with Gaja’s almost wolfish grin and his ever-present charge of crackling energy, the effect is like nothing so much as a happy demonic possession.”