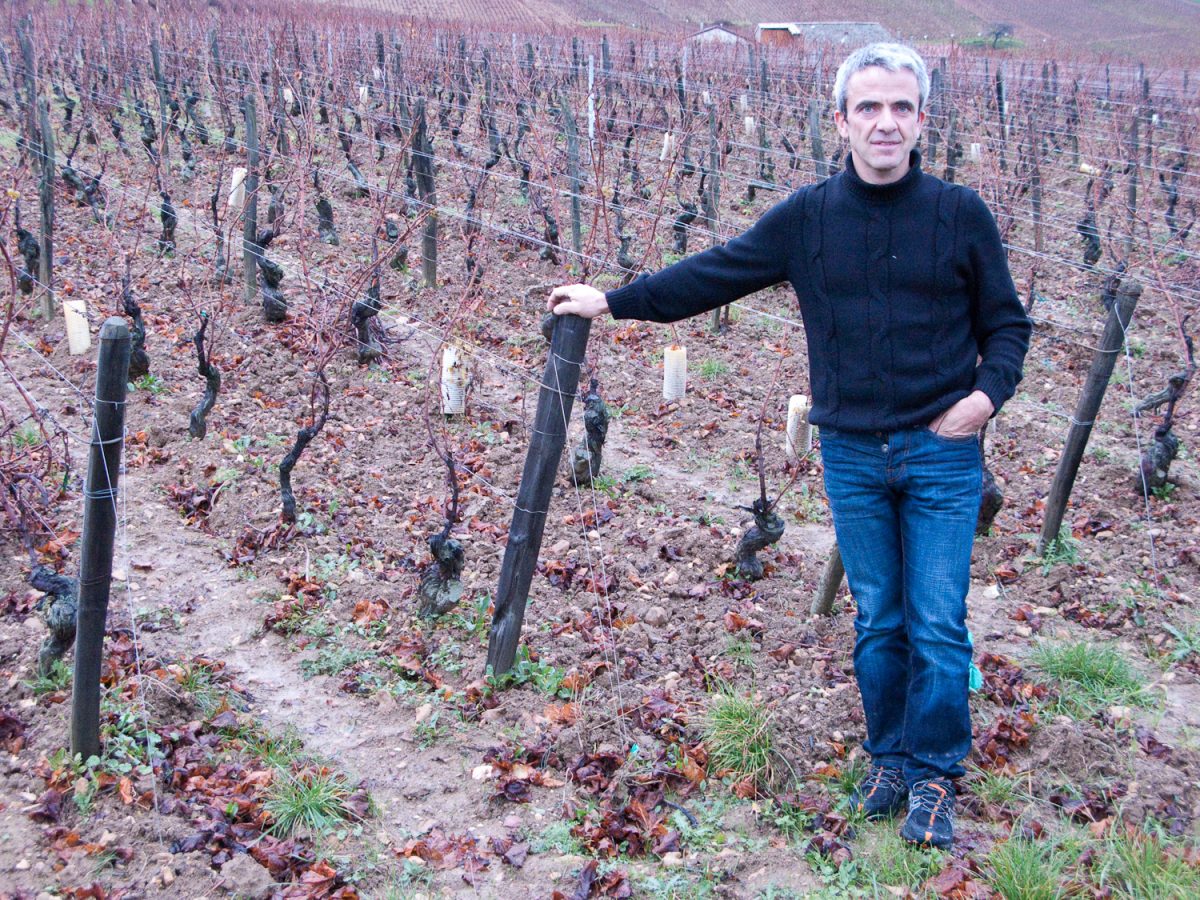 Arguably, one of the key defining features of Burgundy as a wine region must be the huge plateau of limestone on which it sits. Like a solid layer of frosting atop a deeper cake of sedimentary and metamorphic rocks, this limestone starts in the far north in Chablis and continues down into the southernmost parts of Burgundy.

There exists a point in Burgundy, however, where this limestone ends, and rather abruptly at that. So sharply and starkly in fact, that you might easily fall to your death from the edge of it. Get too close, even, and the edge might crumble away beneath your feet, as it has been doing for millions of years, spilling down the hillsides that play host to a little town named Fuissé and a little hamlet named Pouilly. I’m not sure exactly what technically differentiates a town and a hamlet, but I suspect it might be related to the picturesque church that defines the slightly larger Fuissé, for which the hamlet of Pouilly has no counterpart.

These two towns sit perhaps but one kilometer apart, separated by the broad sloping hill of fractured limestone that rolls like the back of a great grey whale to join them together at the symbolic heart of what we know as the appellation of Pouilly-Fuissé. At this point, just to the north of the shoulder of the hill at the point where Fuissé drops out of sight to the south, sits a vineyard plot known as Vers Pouilly. It is owned by three wineries (a remarkable few compared to many portions of Burgundy), one of which is a little winery named Domaine Vessigaud.

An NFL quarterback could probably throw a football from the Vers Pouilly vineyard into the front yard of Pierre Vessigaud’s house, and with the right bounce, it might pop through the open front door of his winery, which sits just opposite the house in the hamlet of Pouilly. Vessigaud has lived here since 1970, after his family uprooted itself from their ancestral home of Fuissé (1000 meters down the road). Vessigaud’s family can be traced back to the 1700’s, but the only real documented proof of how long they have been making wine indicates someone with the last name involved in wine production starting in about 1850. But most definitely, for five generations now, the family has been making wine in the are a we know now as Pouilly-Fuissé.

Pierre Vessigaud is a compact man with bright graying hair and a prominent brow that hangs over bright, lively blue eyes. In a turtleneck, with his animated features and rapid speech tinged with emphatic tones, you might mistake him for some sort of intellectual. One look at his hands however, and there’s no mistaking that Vessigaud is above all, a farmer.

He farms about 17 acres of vineyards in the Pouilly-Fuissé appellation, spread across 40 different distinct vineyard plots. If it sounds a little crazy to have to farm 40 different vineyards just to make a little less than 7000 cases of wine, it is. But that’s Burgundy for you. Ask Vessigaud just how crazy harvest is and he rolls his eyes and smiles. But he’s been doing it since he decided to join his father in the family business when he was a teenager.

These days Vessigaud runs the winery (in a facility he built in 2001 atop a 1940’s era cellar) with the help of his wife and a few others, and the usual band of local residents that can be counted on to help harvest each year. Domain Vessigaud makes a number of wines spread among the different villages within five or ten kilometers, distinguished not only by their quality, which is quite high, but also by his insistence on farming organically, or, as it is known in Europe, Agriculture Biologique. Vessigaud claims that of the roughly 200 producers in Pouilly-Fuissé, only five, including himself, are farming organically (Vessigaud expects his AB certification in 2013).

His explanation of why he decided to move to organic is simple, and is offered with a grin: “Being a vigneron means three things: viticulture, vinficiation, and marketing. I only really like the first one.”

Presumably, though, he doesn’t dislike the second one enough to keep him from doing it as fastidiously as he does his viticulture. After hand harvesting, using a combination of steel tanks, old oak foudres (huge oak barrels that hold 15,000 liters), and five-year-old traditional oak barrels, Vessigaud makes his wines with ambient yeasts and as little mucking about as he can possibly manage. Like all those who take their farming seriously, he believes he can do the most to shape the final wine before the grapes are off the vine.

In keeping with his particular approach to winemaking, Vessigaud also keeps his wine for about a year longer in bottle before selling it than most of his neighbors. The 2008 wines are just about to hit the market.

Unfortunately very little of Vessigaud’s wine makes it to the United States. He cringed when he admitted that only about 50 cases are currently sold in the U.S. but noted that he had some interest in finding an additional importer (importers take note!). Perhaps even more unfortunately, none of Vessigaud’s Pouilly-Fuissé from the 40 to 80-year-old Chardonnay vines in the Vers Pouilly vineyard in the picture above makes it to the U.S. But if you can get ahold of his Pouilly-Fuissé Vielles Vignes (old vines) it is a heck of a wine.

2009 Pierre Vessigaud “Le Haute de Fuissé” Macon-Fuissé, Burgundy, France
Palest gold in the glass, this wine smells of lemon and pink grapefruit, both the rind and the flesh. In the mouth, it is bright and juicy with pink grapefruit and mineral flavors. Very nice acidity and length. Score: between 8.5 and 9.

2009 Pierre Vessigaud “Les Taches” Macon-Fuissé, Burgundy, France
Light gold in the glass, this wine smells of buttered popcorn and the vanilla of oak. in the mouth, it has a bright lemon and vanilla quality shot through with a sharp minerality. Very aromatic, but bottled only a couple of weeks ago it is going through a little bottle shock, which makes the oak stand out much more than it should. It should resolve to resemble the 2008 but with the higher acidity which was typical of this vintage. Moderate finish. Score: around 9.

Light gold in the glass, this wine smells of bright lemon curd, and the delicious savory buttered sourdough aroma that has an almost saline quality. In the mouth the wine has a gorgeous bright lemon and mineral quality with a wonderful tart savoriness, again tinged with a hint of the saltiness that the French call iodé. There is s tiny hint of oak in the background but it is barely perceptible. Score: between 9 and 9.5. Cost: $28. Click to buy.

2008 Pierre Vessigaud “Ver Agniers” Pouilly-Fuissé, Burgundy, France
Light gold in the glass, this wine smells of bright lemon curd and buttered popcorn. In the mouth the wine has a bright sappy pungency with great acidity, Flavors of lemon curd, lemon rind sit at the core, rimmed with a salty cracker savoriness that is quite charming. Looooong finish. Score: between 9 and 9.5.

2008 Pierre Vessigaud “Vers Pouilly” Pouilly-Fuissé, Burgundy, France
Light yellow gold in the glass, this wine smells of rich beurre blanc sauce and lemon juice. In the mouth it is wide, silky and expansive, with flavors of lemon curd, lightly savory buttered sourdough bread, and a wet stone minerality. Overall this wine gives the impression of being perfectly knit together and seamless. Fantastic. Score: between 9 and 9.5.

2007 Pierre Vessigaud “Vers Pouilly” Pouilly-Fuissé, Burgundy, France
Light gold in the glass, this wine smells of piney lemon and bright buttered sourdough toast. In the mouth the wine is wonderfully smooth and silky, and has wonderful poise and precision, with lemon zest, buttercream, and a savory saline quality that makes your mouth water. Very long finish. Score: between 9 and 9.5.