Book Review: Secrets of the Sommeliers by Rajat Parr and Jordan MacKay 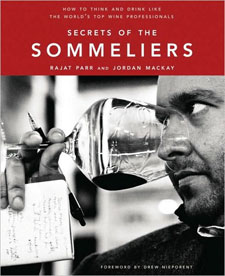 Secrets of the Sommeliers, a collaboration between Rajat Parr, wine director for the Michael Mina group of restaurants in San Francisco, and wine writer Jordan Mackay, carries the sub-title, “How to think and drink like the world’s top wine professionals.”

Enticing as that sounds, and interesting as the book is, by the end, I wasn’t entirely sure I was up to either task.

The world of the upscale restaurant sommelier is a rarified place, populated by razor-sharp palates honed through years of diligent practice, access to tasting an astonishing range of wines most of us never see and can’t afford, and after-hours gatherings of fellow somms arriving with thousands of dollars worth of mystery wines to slurp and identify in blind taste-offs. The day job is plenty demanding, requiring sommeliers to manage complicated inventories, deal with an endless string of winery and distributor reps, think on their feet, read customer’s minds, and gently negotiate with high-rollers who want to order expensive wine that couldn’t possibly match their food.

While a number of nationally-known sommeliers get quoted here and there in the book, this is mostly about the drinking and thinking of Rajat Parr, a superstar in the world of fine wine buying and service. (Co-author Mackay may be responsible for most of the prose, but the opinions are clearly Parr’s.) From the unlikely starting point of a childhood in Calcutta, Parr made his way to the Culinary Institute of America in New York, quickly demonstrating an amazing palate. Armed mostly with determination, he went to San Francisco and talked his way into a position working with Larry Stone, wine director at Rubicon, and his career took off: from Rubicon to the Fifth Floor, and then to Michael Mina’s expanding restaurant empire, including most recently the wine-themed RN74, which has Parr’s personal stamp all over it.

Up front, we are introduced to Parr through an episode one evening at restaurant Michael Mina, when a couple came in with a special bottle in a paper bag and asked Parr to identify it. He tried to beg off because of a lingering cold. The customers insisted, and so with only a sniff, he correctly called it as a Volnay Premier Cru Burgundy, and after one sip, as a 1998. As it turned out, he also had the producer in his head, though the bottle was revealed before he spoke. As the book suggests, just imagine what Parr might be like with his full game on.

Credentials established, the book moves through the world of the sommelier from almost every angle: the development of the role historically, capsules on modern-day pioneer sommeliers who redefined the profession and fine wine lists, service essentials, storage and serving temperatures, buying strategies and tasting notes. Some sections are fairly predictable — the discussion of buying wine at auctions, for example, boils down to “look for the deals other people miss.” Some, like the short, pithy section on wine and food pairing, are fresh and insightful. Parr draws some nifty distinctions between different preparations of the same chunk of protein, and offers a promising solution to the age-old riddle of what goes with soup and with fried foods: Champagne.

A central focus is on how to taste, and how to get better at tasting. As you might expect, rigorous practice is the key, and the more years of it the better. In case you thought this would be easy, Parr suggests drinking only one kind of wine for a month or two, in all price ranges, from every region, until that grape’s character is burned into your head; and then pick another one. His suggestions of iconic and benchmark wines that define certain grapes and regions sound right on the money to me, with an emphasis on the money part: many of the listed bottles — great Burgundies and Bordeaux, for example — carry a bottle cost higher than most people’s idea of a good case price.

Parr is a strong advocate of blind tasting, arguing that it’s essential to developing a great palate and palate memory, and the book contains a number of accounts of tension-filled moments before the brown bags are removed. His passion for this approach makes for an interesting contrast with recent books by Terry Thiese (Reading Between the Wines) and Matt Kramer (Matt Kramer on Wine), both of which contain rants against the practice, arguing instead that the contents of a bottle can’t be fully appreciated without the knowing the context — the place, the traditions, and preferably the winegrower.

The final third of the book is simply called “The Wine List,” Parr’s admittedly very personal overview of his favorite regions, styles, and producers. Calling the list Burgundy-centric would be an understatement: while California gets three pages, Germany two, and New Zealand two paragraphs, Burgundy gets 26 pages. Vosne-Romanée, home of the fabled Domaine de la Romanée-Conti, commands four pages, compared to the two for all of Italy. Australia, Chile, Argentina are nowhere to be seen.

The wine list pages include some tips on relative bargains, and some rather blunt critiques of certain developments and specific producers; the Northern Rhône section, has less than kind words for Jaboulet and Chapoutier. Most remarkable is the dismissal of the wines of Bordeaux — all of Bordeaux — in two short paragraphs. Parr admits to bang quite fond of classic vintages bottled before he was born, but finds the current wines “commoditized and soulless.” Part of the problem seems to be that Bordeaux producers don’t do vineyard tours, they just talk business; but blowing off one of the world great wine regions for bad manners seems a bit snippy.

What’s most striking is how “old school” the list is. The wines are almost exclusively Old World, and made from a handful of grape varieties. You will search in vain for the word Zinfandel, let alone for the bushel of indigenous grape varieties that have exploded forth from southern Italy, Iberia, and southeastern Europe in the last decade. The book notes that one of the jobs of the corps of sommeliers is to spot the next new thing, and mentions the sommelier-driven popularity of Austrian Grüner Veltliner as an example. All of that is someone else’s list, and someone else’s book.

So, back to the sub-title. As I feared, the secret is that to think and drink like a sommelier, you either need to become a sommelier, with all the training and networking and access to fancy bottles that comes with it, or be extremely rich. I’m too old to adopt the former strategy, and the latter is above my pay grade.

Let me not end with just sour grapes. For aspiring sommeliers and wine collectors, this is a valuable resource; and as a look behind the curtain at how the other half of one percent drinks, Secrets of the Sommeliers is an excellent read.

Rajat Parr and Jordan Mackay, Secrets of the Sommeliers: How to Think and Drink like The World’s Top Wine Professionals, Ten Speed Press 2010, $21.45 (Hardcover).