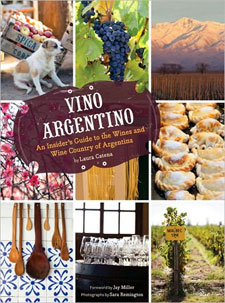 Argentine wine is an interesting subject for a book at this point in time. The wine industry in Argentina is currently witnessing a renovation and redefinition, with many wineries focusing on the potential for exportation. This burgeoning fine wine industry has caught the eyes of many throughout the international world of wine, and the quality to price ratio of many wines is exceedingly attractive. These points, along with the coincidental fact that I am presently here in Mendoza, led me to a reading of Laura Catena’s Vino Argentino in the hopes of gleaning a bit of additional knowledge about the wine country surrounding me.

Laura Catena is the daughter of the legendary Nicolas Catena, the man credited with almost single-handedly rejuvenating Argentina’s wine industry. Though the Catena family had been growing grapes and making wine in the Mendoza area for three generations, Nicolas became infected with the idea to produce export-oriented wines after a very influential visit to Napa Valley in the 1980’s. With careful research and planning and a shrewd business sense Catena quickly transformed his estate from bulk wine production to fine wine production and grew his holdings to encompass many new vineyards. He brought some of the best-known winemakers and consultants to Argentina for the first time, such as Michel Rolland, Robert Mondavi, and Paul Hobbs. Since the 80’s a dramatic change has swept the industry from Salta to Patagonia, and most aggressively in Mendoza.

As a member of the illustrious Catena clan, Laura is a born Argentine wine expert. Educated in Biology at Harvard University, she has the background to understand not only the culture of wine but the science of terroir as well. These credentials certainly qualify her to write a book on Argentine wines and led me to high expectations about the quality of its content even before reading the praise she received from Dr. Jay Miller of the Wine Advocate, who wrote: “Anyone heading to Argentina, and particularly to the wine country, should be carrying a copy of this terrific volume.”

The book begins with an interesting introduction that discusses the important role wine has played in the lives of Argentines throughout history, offers a profile of the Argentine people, and gives a general description of Argentina’s appellations. Here the author presents her goal: “Vino Argentino is an insider’s travelogue to the Argentine wine country.” The first chapter then lays out the historical foundations for Argentina’s ascendancy as a wine region. In a short space Catena covers a history of the region’s grapes, the waves of immigration that transformed the country and when and why they occurred, a look into the specific terroir of Argentina and why it is very beneficial to vine growing, and finally some specific notes on the country’s rather unique lack of certain pests and diseases and the factors which prevented their spread.

Despite this strong beginning, the book flounders after the first chapter. Chapter two is entitled “Argentine Food and the European Immigrant Tradition,” but strangely it seems only to focus on the native peoples and Catena’s influence in the country. The following nine chapters offer a brief history of each of the Argentine wine appellations, what makes them unique, and which wineries to visit, paving the way for the introduction of the characters Catena deems the most influential of each region. But those with any knowledge of Argentina and its wide variety of wine producers will be greatly disappointed to see that the book mostly deals with the largest, export-driven producers.

Catena makes little to no mention of the many boutique wineries that make Argentina’s wine regions so colorful and rich. Wineries such as CarinaE, Fincas Don Martino, and Bodega Sur de los Andes, all of which consistently produce delicious highly rated wines, are completely left out. The absence of such producers ultimately undermines the entire premise of the book, making everything after the first 30 pages seem like an advertisement for the elite of the Argentine wine industry. Everything, that is, except for roughly half the content of the book which consists of a list of recipes and definitions for various concepts that are not put into context. The later chapters in particular are poorly structured and somewhat muddled in their purposes. For example in chapter seven, “Luján de Cuyo: Agrelo and Ugarteche,” exactly one-half the chapter discusses Catena’s winemaker and the Catena Zapata winery, one-third speaks of ungrafted vines (present all throughout Argentina, so I’m not sure why the discussion is held here), and the rest mentions a few other wineries by name with no further discussion of them.

Despite these shortcomings, the book is written in a captivating style. Catena’s descriptions of the tree-lined streets of Mendoza, the windswept plains of Patagonia, and the exotic but slow-paced villages of Salta, are sure to enchant. Catena’s description of Mendoza as a “landscape of high drama, a vast desert region ringed by mountain peaks… valleys that blossom into lush oases amid dry brush and desert,” made me take a second look at my surroundings and appreciate them a bit more.

Vino Argentino touches on the fascinating history and abounding potential of this little-understood corner of the wine world, but fails to characterize it accurately as a whole, or to present a compelling, coherent narrative. I had hoped it might serve as a guide for further exploration of a region that I am coming to know well, but it appears for now I will have to stick with Alan Young’s Wine Routes of Argentina which I recommend as the best source of information on the region.

Sarah Trubnick is a physicist turned sommelier currently pursuing a WSET diploma in London. Between her travels and studying she focuses on homebrewing and writing. She currently writes for The Kitchen Hotline and has begun keeping a running blog of her travels at justanotherwineblog.blogspot.com.