The Best Cabernet in Napa: Tasting at Premiere Napa Valley 2011 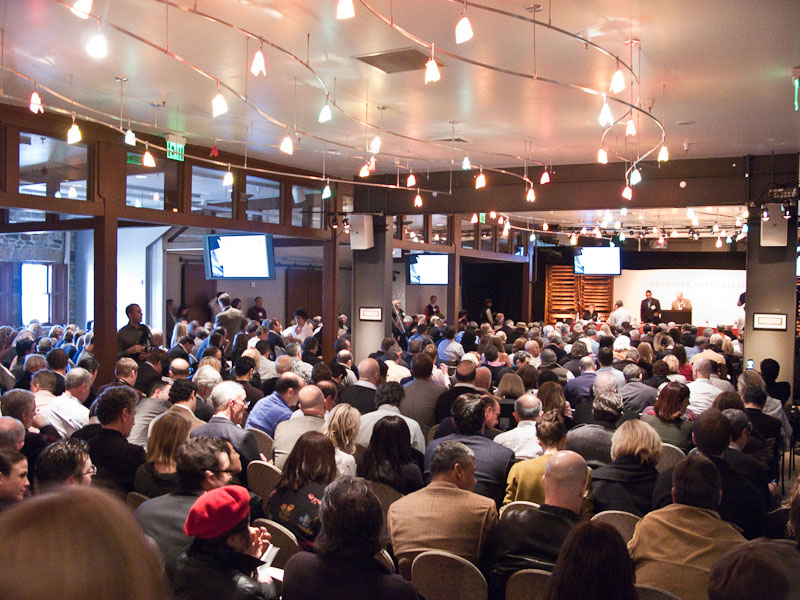 , journalists like me get a chance to sneak a taste of hundreds of unique wines that are purchased by the nation’s top wine retailers at staggeringly high prices.

This year, as every year, 200 member wineries each crafted a unique auction lot of wine that in most cases represents the very best wine that they are capable of producing. Some bottle five or ten cases of wine from their best barrel and some make a unique blend from their two best vineyard blocks. No matter what their composition, each auction lot must be a unique wine that will never be available anywhere else, and implicitly, it must be as good as possible, to ultimately fetch the highest price.

So what’s the good in me tasting wines that most won’t be able to buy, let alone drink for some time? As I swoon over some of these wines, I often ask myself the same question.

Some of these wines can actually be purchased by the public, though they require persistence to track down, plus a cavalier attitude towards the price of wine. Who knows whether anyone will actually get a chance to buy a bottle (let alone a case) of the Scarecrow wine which sold at $125,000 for five cases (more than $2000 a bottle) today, but I shudder to think what the price per bottle will be.

In recent years, the Napa Valley Vintners Association has been making a concerted effort to give the public access to these wines, and as a result, interested parties can look up the winning bidders on the auction site, and see which lots may be sold by the winning bidders.

If you’re like me, however, you probably can’t afford a single bottle of even the lowest priced wines from this event, so really, apart from offering a ringside view on the uppermost echelon of California wine buying, the Premiere Napa Valley auction provides three main insights:

1. The measure of demand strength for the luxury end of the Napa wine industry
2. A gauge of the quality of wine that a large number of Napa producers can make when they really try
3. A broad sense of the qualities of a particular vintage — in this case, 2009

I attend every year for these insights, along with the fantastic food and laid-back camaraderie that accompanies the event.

This year’s event saw a healthy jump in proceeds from last year, which could have been predicted from just the energy in the auction room starting from the very first bid, and culminating in the record-setting bid for the Scarecrow lot. According to unofficial 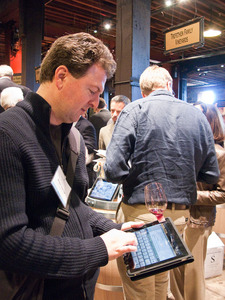 estimates this afternoon, the auction brought in $2.4 million, compared to last year’s $2 million. While no one in their right mind would suggest that the market is “back to normal” for high-end luxury wines, the demand shown today is quite encouraging for anyone with a $70 Napa Cabernet to sell.

With regards to the 2009 vintage in Napa, there have been some less than enthusiastic reports, largely due to the rains that hit mid-October of that year, which was in the middle of harvest for some, but did not really spell disaster for any. Somehow this rain overshadowed a largely perfect, even deliciously cool, growing season which made for excellent fruit development.

My experience tasting these auction lots found in general that 2009 was an excellent vintage for those who knew what they were doing in the vineyards, in particular for the nice acidity and very fine grained tannins that many wines seemed to possess. Some of the wines were excessive in their tannin, not to mention ripeness, which is to be expected from any cross section of Napa, but on the whole, the 2009s are excellent wines, which I think I even prefer to the 2008s. The best wines are bright and juicy, and quite accessible even in their pre-bottled state.

The Premiere barrel tasting is quite a marathon, especially for a guy like me who sets out to taste literally every single one of the 200 wines on offer. I have to work my ass off in order to get through them all. This year, I tasted all but two (Continuum and Levy-McClellan), who had run out of wine before I got there.

Despite being a several-hour-slog through a lot of big wines, I really enjoy the opportunity to sample fabulous work of 200 master craftsmen and women. By virtue of having my iPad with me (caught on film as you can see, by a friend of mine), not only were my notes legible, but I don’t have to transcribe any of them, which usually keeps me from including the little bits of tasting data I record about each wine. I’m happy to provide these adjectives (shown in italics below) that are my personal notes about the wines — not tasting notes from considered analysis of the wine, but initial impressions, and in some cases, snarky comments.

2009 Scarecrow Wine “Toto’s Opium Dream: Scene II” Cabernet Sauvignon, Rutherford.
Bright medium garnet in color, this barrel sample leaps out of the glass and grabs you by the shoulder and whirls you into a sparkling haze of cherry perfumed belly dancers. Explosively bright and juicy on the palate, this wine can’t help but bring a smile to your lips, as ripe cherry, cola, and hints of citrus oils swirl in a dazzling electric silk river down your tongue. Extremely restrained, fine grained tannins hover in the background at the far reaches of perceptibility. Great acidity and a remarkably light body make this wine a joy to drink. Utterly compelling.

WINES SCORING AROUND 7
2009 Silver Oak Cellars Come Together, Right Now Cabernet Sauvignon, Napa Valley. Enough oak to choke a horse, and only the barest hint of fruit in the background. Didn’t know it was possible to have this much oak.