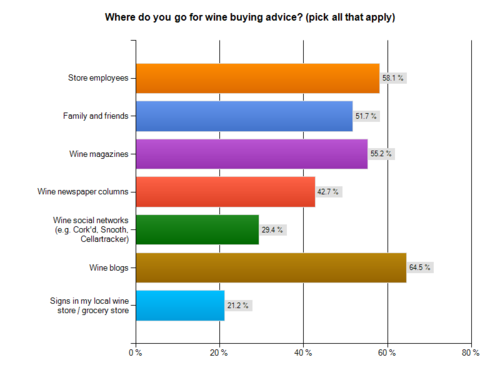 This is the first blog entry (of thousands) in the seven years I’ve been writing, where I am actually writing an article about a press release that was sent to me. I mention that simply because it’s worth noting how generally worthless most press releases are to me, and how little inspiration they provide to write anything.

This press release wasn’t from a winery, however, it was from an organization called Wine Intelligence, that conducts surveys and analyzes trends in the wine industry. They recently conducted a survey that purports to examine the level of trust that wine drinkers have in the various sources of information available to them.

The main headline of the report? “Independent bloggers are one of the least trusted wine information sources in the UK, USA and France.”

I don’t know about you, but this doesn’t surprise me in the slightest, even though I suspect the numbers being reported suffer from a few flaws. Now I haven’t gotten the details of the findings — I’m just going off the press release here — but any study that examines the use of the Internet for gathering wine information that includes the French population has got to be suspect. Up until recently putting any information about alcohol online was practically illegal in France, so it’s no wonder they don’t go looking online for wine information.

And the study, or at least the results portrayed in this press release, don’t seem to segment respondents by demographic. If blogs were relevant at all, I would expect them to be relevant almost exclusively to the Millennial demographic.

But those are quibbles, and not disagreements with what I believe is probably a general truth. Most people are most certainly going to trust their local wine merchant, an established critic, or a sommelier in a restaurant more than a blogger. And frankly as a rule, they should.

Why? Because a lot of wine bloggers don’t really know what they’re talking about.

That’s not something I’ve written much here on Vinography, though some of you who have cornered me in social situations have heard me say it in person. There’s a lot of crap out there when it comes to wine blogs (or any kind of blog, for that matter), and there isn’t enough really great writing to have produced a situation where it’s easy for average consumers to find trustworthy, reliable, and informed wine recommendations from blogs.

Of course, that isn’t to say that many bloggers know a lot more about wine than, say, your average employee at BevMo or a local supermarket. And of course there are a dedicated group of people out there who very deliberately look to wine blogs for recommendations, as my recent reader survey showed:

A full 64% of my readers looked to wine blogs as a source for wine recommendations, more than any other single source.

Of course, my readership is about as far removed from a general cross section of wine drinkers as you can get.

But that’s the point of course. Blogs are highly relevant to the people that care about blogs (who also happen to be the people who know where to find the good ones) and completely useless to most people.

At least, that’s what you would expect people to say on a survey.

The final point to be made here, however, is that there’s a difference between what people might say on a survey (“on a scale of one to ten, rate how much you trust each of these different sources of wine information”) and their actual behavior on the Internet.

A full 60% of my traffic is organic search traffic to individual interior pages of my site. This means that the majority of my readers aren’t coming to my home page to peruse what this blogger has to offer. They are random people searching for random things (wines, concepts, phrases) that end up on an individual random page of my web site.

The vast majority of the search terms that bring people to my pages include phrases like “prisoner wine review” “2009 Burgundy review” “Napa Cabernet Scores.” And of course, all of these mean that people are out there searching for specific bits of information. Which they then come and find on my web site. And presumably go away with. Do these people know that they’ve gotten their questions answered by a blog? Probably not. Do they care? Probably not.

Now multiply that phenomenon by thousands of wine blogs and chances are that people looking for wine information are going to end up on blogs, and I’m betting that what they’re finding is answering their questions. Even if they’re likely to say that those wine bloggers can’t be trusted.

Take a look at the press release and let me know what you think.

Quite a clever tactic to publish a study finding about wine bloggers that would likely prompt a lot of them to write about it, no?