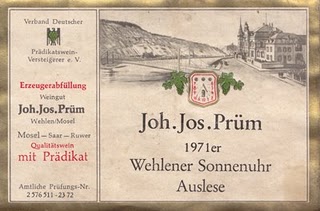 As you know, I think wine reviews should be more than just tasting notes and scores. They should be the stories of the people and the places behind the wines. While the people quite often bring the most life to the story of a wine, sometimes the place, even the vineyard itself, can be the most prominent character in the drama.

In the case of this wine, the story consists of the inextricable link between a family and a vineyard. By most accounts, the Prum family has owned vineyards in and around the town of Wehlen in Germany’s Mosel river valley since the early 12th century, and they have lived in the area even longer. I’m not entirely sure when the Prum name first appeared on a wine bottle, but the name became famous in conjunction with wine when in 1846 Jodocus Prum painted a sundial on the face of a rocky outcrop in the center of a steeply sloping vineyard that would henceforth be known as the Wehlen Sundial vineyard, or Wehlener Sonnenuhr.

Today such an act might be seen as anything from artistic to prankish, but in those days it was merely pragmatic – the equivalent of erecting a clock in the town square. The winegrowers of the region needed a way to keep track of time, and the steep face of the vineyard seemed as good a place as any.

Jodocus Prum’s health began to fail in the late 1800’s and so he began to split up his lands among his seven children, several of which started their own wineries. The Prum family is to German wine what the Hearst family is to publishing in the United States. Today there are at least seven wineries that bear the Prum name several generations later: including Alfred Prum, Dr. F. Weins-Prum, Jos. Christoffel Jr. (formerly Christoffel-Prum), Studert-Prum, Weingut Steffen Prum, S.A. Prum, and J.J. Prum. Several more Prum intermarriages and mergers are also responsible for several more prominent names in German wine, including Dr. Loosen.

Many of these scions of Jodocus Prum still make wine in and around Wehlen, and several continue to own portions of the famous Wehlener Sonnenuhr vineyard (which at last count was parceled out into 200 different separately owned holdings).

Among the Prum families making wine from the Sonnenuhr vineyard, J.J. Prum has achieved perhaps the most acclaim for its wines, and quite deservedly so. They are among my most favorite producers in Germany.

Established officially in 1911, J.J. Prum (officially Joh. Jos. Prum after its founder, Johann Josef) has passed down through three generations and is now tended by Dr Manfred Prum, who has been running the estate since 1969, and his daughter Katharina who recently became involved in the family’s estate. J.J. Prum has 33 acres of holdings across a number of famous Mosel vineyards, including a parcel in the Sonnenuhr.

Grown on the region’s decomposed blue slate soils, at incredibly steep inclines, the own-rooted (non-grafted) Riesling vines in the Wehlener Sonnenuhr average 80 years of age. The non-irrigated vines are, for all intents and purposes, grown organically, though the estate is not certified.

Grapes are meticulously hand harvested and destemmed before being gently crushed into steel tanks where they fully ferment at their own pace and almost always with native yeasts before being moved into 50-plus-year-old, 1000-liter oak casks where they age until bottling. The estate produces around 13,000 cases of wine annually.

I had the opportunity to taste this bottle thanks to a friend who quite generously pulled it from his cellar. It may well be one of the most quintessential examples of great Riesling in the world. It is essentially the most famous wine from one of Germany’s finest producers, one of the world’s great vineyards, and from a vintage that was heralded as exceptional. The chances to taste wines like this one are very special moments indeed, especially when the wine predates the taster.

Tasting Notes:
Light amber-orange in the glass, a truly gorgeous hue, this wine smells fantastically of petrol, beeswax, and dried orange peel, plus some undefinable sense of history. In the mouth, the wine slides musically across the tongue. It has a light sweetness remaining, and offers phenomenally balanced flavors of candied orange peel, honey, roasted nuts, and a background rumble of stoniness that emerges only after careful study. The long finish has a wonderful, airy vanilla and cream sherry aroma to it, with hints of honey roasted nuts. A perfect example of why Riesling is one of the greatest aging wines in the world. Outstanding.

Food Pairing:
It’s hard to know what sort of pairing to recommend with a wine that, frankly, I see no reason to eat anything with. I’d be perfectly happy sitting in a comfortable chair drinking this wine with some Mozart in the background.

If you did want to eat something with it, some charred bread and goat cheese might be an excellent match.

How Much?: This wine would prove quite difficult to buy today, and if you really wanted to own one, it would likely cost you somewhere north of $500.