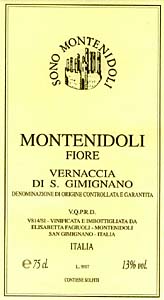 About three months ago, I found myself wandering around the halls at the Vino2011 tradeshow in New York. Put on by the Italian Trade Commission, it is the largest Italian wine show outside of Italy, and an opportunity to taste an awful lot of Italian wine in a very short period of time.

Sometimes when I go to such events, I have a plan to focus on certain regions, or grape varieties, but sometimes I just wander to see what catches my eye.

Which is how one afternoon I ended up in the back corner of a side hall where a rather unadorned table held a few ice buckets, out of which I saw peeking a bottle of rosé that was the palest shade of pink you could imagine.

Just as some people immediately notice an Hermes scarf from twenty yards just by the stitching, or a F.P. Journe watch from a glimpse of its hands across the room, I tend to pay an awful lot of attention to the hue of rosé. The lighter the better, I say, and when I see one shimmering towards the pale side of colorless, it’s like finding a twenty dollar bill on the sidewalk.

Little did I know it, but I was about to be introduced to some of the most unique and special wines of Northern Tuscany.

The rather plain-looking (compared to the snazzily dressed representatives at other tables) old lady behind the table was engrossed in a phone conversation, and had her back to me as I approached. This suited me just fine, as I hoped to simply sneak up to the table, grab a taste of the wines, and if they weren’t all that great, head off to the next table without wasting much time for conversation.

But then I poured a bit of that rosé for myself, and put it in my mouth, and learned why, among certain circles in the wine world, when you ask someone who the best wine producer in San Gimignano is, there is no hesitation before they say Montenidoli. I had exactly this experience for several weeks after tasting these wines, and was left with the distinct impression that I had just been let on to a secret, much later than everyone I knew.

The woman behind the table, who eventually introduced herself after she finished her call and saw me stunned in the grip of her tremendous wines, was Elisabetta Fagiuoli. And the twinkle in her eye demonstrated that this wasn’t the first time she’d snared such an unsuspecting taster.

Fagiuoli and her husband Sergio founded their winery in 1965, on their hillside property across a little valley from the picturesque Tuscan town of San Gimignano. Montenidoli means “mountain of little nests” and with its forested reaches and populations of swallows it’s easy to understand how it came by that name. San Gimignano, known for its many intact Medieval clock towers and surrounding wine, is quite famous in the wine world for being awarded the very first DOC (Denominazione di Origine Controllata) designation of anywhere in Italy. This honor was no doubt due, in part, to the historical significance of Vernaccia de San Gimignano which has been famous since at least as far back as the Renaissance, where it was a favorite of the sculptor Michelangelo.

Fagiuoli’s land sits on a bulge of some of the oldest rock in Italy, and she claims that it was planted to vines first by the Etruscans, whose 7th century BC civilization lends Tuscany its name. She and her husband own about 900 acres on the top of her hill, of which most is essentially a nature preserve — ancient forest and wildness. Out of this forest the Fagiuolis have carefully coaxed about 57 acres of vines, olives, and farmland.

Part of their inspiration for becoming vintners was the discovery of ancient olive trees overgrown with brambles that they believe are as old as the stone home they moved into on the property, which dates back to the 13th Century and was purportedly constructed by the Knights Templar.

Since breaking ground in the late 1960s, insecticides and herbicides have never been used on the vineyards, and the Fagiuolis avoid the use of copper and sulfur on the vines except in dire circumstances. The grapes are harvested by hand, carefully sorted, and then destemmed and crushed.

The winemaking is mostly done in what might be called an ancient style, with the primary concession to modernity being temperature controlled steel tanks for the white wines. The reds ferment in epoxy-lined cement tanks before moving to wood barrels.

Elisabetta is both the viticulturalist and the winemaker, and ultimately the keeper of the soul of Montenidoli and its wines. She is widely credited with singlehandedly elevating Vernaccia di San Gimignano to a new level of quality, and continues to make some of Tuscany’s most distinct wines, now from vines that are 50 or more years old. Her label bears the words “Sono Montenidoli” or “Only Montenidoli” in reference to the fact that the wines have always been, and will always be, only from grapes that she tends herself.

Without question, her white wines are some of the best made in Tuscany, and are incredible values. They are some of the most exciting things I have put into my mouth in 2011 and I highly recommend seeking them out.

2007 Montenidoli “Tradizionale” Vernaccia di San Gimignano, Tuscany
Palest gold to near colorless in the glass, this wine smells of wet stones, white flowers, and unripe pears. In the mouth it is crisp and juicy with green apple, wet stone, and hints of citrus zest. Excellent acidity, wonderful balance and texture, and a long floral finish make this a truly delightful wine. Score: between 8.5 and 9. Cost: $19. Click to buy

2007 Montenidoli “Fiore” Vernaccia di San Gimignano, Tuscany
Near colorless in the glass, this wine has an unusual nose of cucumber and white flower aromas. In the mouth the wine is electrically bright and crisp with lemongrass and stony minerality. Notes of cucumber and green apple emerge amidst a delicate skein of white flower aromas. Perfectly balanced, with delicate acidity. Made from her best Vernaccia grapes, and only free-run juice that is kept much longer on the lees than her normal wine. Score: around 9. Cost: $24. Click to buy

2009 Montenidoli Rosato di Canaiuolo IGT, Tuscany
Pale salmon pink in the glass, this wine smells of rose petals and orange peel doused in a cool spring rain. In the mouth tart strawberry and orange peel flavors swirl in a satiny textured body, and morph into more citrusy rosehip tartness as the wine finishes. Delicate, crisp, bone dry, and everything you could dream of a rosé being. Utterly fantastic, and deeply quaffable. Score: around 9.5. Cost: $20. Click to buy.

1999 Montenidoli “Il Templare” Bianco IGT, Tuscany
Medium gold in the glass, this wine has a nose of dried orange peel, white flowers, and what I can only describe as the sweet smell of wet leaves. In the mouth the wine has a beautiful poise and texture, with flavors of beeswax, wet stones, lychee, and lemon cream. Incredibly exotic and impeccably balanced with beautiful acidity, this wine literally had me speechless for minutes. It has aged beautifully, and clearly will for more than a decade or two longer. An unusual blend of Vernaccia, Trebbiano and Malvasia, it is a wine that Fagiuoli is considering selling some of out of her library. I certainly hope for our sake that she does. Score: between 9.5 and 10. Cost: unknown. Current vintages sell for around $28. Click to buy.

In addition to the wines above, Montenidoli makes a third Vernaccia, and four red wines.