Why Every Wine Lover Needs to Call Their Representative in Congress 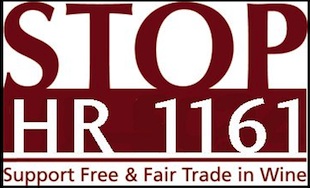 Last year, one of the most anti-consumer pieces of legislation in years was introduced to the House of Representatives under the name HR5034: The Comprehensive Alcohol Regulatory Effectiveness act, or ironically, “CARE.” I wrote last year about what a piece of shit masquerading as legislation this bill was, and was happy to see that it never made it to the floor of the house for a vote.

Well now thanks to a tool of a senator named Representative Jason Chaffetz, a Republican from Utah, it has been resurrected as HR1161, and the named changed to the Community Alcohol Regulatory Effectiveness act.

There is a reason that every winery and beer marketing, production, and sales association in the country, along with every consumer advocacy organization related to alcohol is against this legislation.

The bill is insidious in its simplicity. It would make it effectively impossible to challenge any state’s laws about alcohol distribution or direct shipping by forcing the challenger to prove that any particular does not “advance a legitimate local purpose that cannot be adequately served by reasonable nondiscriminatory alternatives.”

In other words, as long as any state can prove that its laws, no matter how discriminatory, anti-competitive, or anti-consumer, do anything useful, like produce tax revenues or prevent children from buying alcohol, those laws cannot be overturned by a legal challenge by any party or any act of Congress.

Under their usual guise of trying to “protect the children” from an “epidemic of alcoholism” this bill, purportedly written by the liquor wholesalers lobby, effectively keeps the alcohol laws of this country an affair to be settled by state legislators and their wholesaler lobbyist friends.

As my friend Tom Wark puts it: “It’s as though the wholesalers are admitting that without state-mandated welfare, they can’t compete in a free market and they are willing to screw consumers, wineries, retailers, distillers, and brewers in order to keep their cushy, unearned, state-protected profits.”

If you have ever ordered a bottle of wine by mail from a retailer or a winery, or if you simply believe that this most basic of transactions should be available to adults who want to do it, then you need to contact your congressional representative and tell them under no circumstances should they vote for HR1161.

Here’s the easiest way you can locate and contact your representative.

Also you can join STOPHR1161 on Facebook and help spread the word that this bill will cripple consumer access to wine and give wholesalers an unfair advantage in the marketplace.

If you are a member of some wine, beer, or liquor industry association, make sure they are both telling their members about this dangerous piece of legislation, as well as making their voices heard in Washington.