Airline Wine: (Nearly) Everything You Wanted To Know 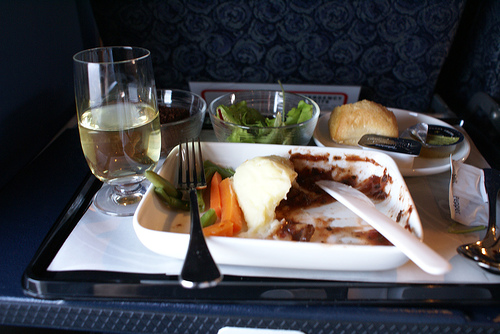 So there I was, sitting in Business Class on my way across the country, courtesy of an all-too-rare-these-days upgrade (thanks to my lowly status), and the option of having a glass of wine with my lunch arose. Always up for an adventure, I ordered the Merlot, and gamely tucked in, when I had the chance.

It was awful. The sort of wine that I didn’t want to have a second mouthful of.

The wine had just underperformed my very low expectations, which I thought was hard to do. You see, it’s been a long time since I had what I thought was a decent glass of wine on a domestic airline. Most of the time I don’t have the option of a glass poured from a 750ml bottle, so I don’t drink wine while flying. On those rare occasions when I do fly Business Class, it’s usually internationally, and I admit to being spoiled by some of the Asian airlines in the early 2000s which spent a lot of money on their wine programs.

But here and there I grab a glass on a plane between our coasts, and generally I have the sense that the state of wine above 30,000 feet in this country has gone, er, downhill, from a point that wasn’t that elevated to begin with.

So as I stared at that Merlot, gently slopping over the top of my glass through the latest rash of turbulence, I found myself wondering how the hell the wine gets on the airline in the first place, and what sorts of constraints (I imagined there must be a lot of them) would result in me having that specific glass of Merlot in front of me at that particular point in time.

I knew where I could get the answers to my questions. I had met sommelier Doug Frost at the Taste of Washington wine event several years ago, and he seemed like an approachable guy. We had a good, if short, conversation while waiting for our respective taxis one day at the hotel we were staying at.

Frost, who is one of only three people in the world who hold both the Master Sommelier and Master of Wine titles, has been the worldwide wine consultant for United Airlines for several years now.

He graciously agreed to answer my questions by e-mail about the hows and whys of airline wines (at least in the context of his client, United), and if we’re lucky (and he stops in to see how this thread develops) he might answer some of yours left in the comments as well.

Have you or do you work for other airlines?
No, United is the only airline for which I’ve consulted.

Can you please describe the process of selecting the wines? Where do you find them and how do you evaluate them, and then how do you (or others?) decide which ones end up on planes?
The selection process begins with a typical rfp tender; sent out to all available vendors/importers/wineries. The rfp sets out the price range, the grape(s), the country or region of origin, the vintage range and the style of wine that is being sought out. We require of the wines that they exhibit balance in style (no excessive alcohols, tannins, and such) and without noticeable flaws (we look for VA, EA, Brett, H2S and the like). We go through written wine offerings covering hundreds of wines, and I cut that number down based upon an agreed upon count and my best guess at the likelihood of the wine’s success in subsequent tastings. Next we set up a preliminary tasting; it might be a few hundred wines, it might be five or six hundred. In some years that has been a blind tasting; of late, it is not. Out of that group, I choose about 100 wines for the final tasting – not a predetermined number but that’s how things usually go. Finally, the tasting group (comprised of purchasing, beverage, culinary and logistics management, as well as an occasional guest either from among the Global Services ranks or outside wine professionals) tastes the wines blind and selects the wines that will be boarded, dependent upon the price and the availability.

When you say all available importers distributors, do you really mean, every one in the country?
Well, there are only a few brokers who specialize in such work: they each handle many wineries and importers. There are a small group of wineries that sell directly, and there are a relatively small number of European wineries that wish to do business with airlines.

Would you be willing to share more details about the RFP? Like the price ranges, or how you describe the specific styles?
Sorry, I’m not allowed to share pricing information. The style issue is easy: like I say, we offer one each New World red and one Old World red, as well as one New World white and one Old World white; and one of the reds is light to medium-bodied (generally Pinot Noir or Syrah/Grenache based) and one is full-bodied (Bordeaux variety-based). One white is Chardonnay and one is non-Chardonnay (Sauvignon Blanc, Riesling, some such).

How DO you determine what to put in that RFP? What’s the thought process behind the selection of the RFP contents? What drives your sense of which wines should be on the list?
In First Class, we need classic names and character. In Business Class, we can step outside the classics to a degree. Throughout all classes of service (First, Business, Domestic First Class, Coach Class), I need overt fruit more than anything else. I concede that somebody can complain about my choice, that they may find some of the choices simple and perhaps boring, but my greatest wish is that there is always fresh, well-preserved fruit. And I try to bear in mind what my predecessor, Bob Thompson, used to say (I paraphrase): that most travelers feel hassled and harried and we want that glass of wine to change a traveler’s day, to slow it down and make it better.

What kinds of constraints do you have in both determining the pool of wines you have to choose from, and then your final selections?
Price is of course a constraint. Perhaps surprisingly, over the last seven years I have not had my budget trimmed, nor have I been under any pressure to save money in any of the cabins or categories. The biggest constraint is often availability: we buy hundreds if not thousands of cases of any particular wine and often the wineries have, by the time the selection process is completed, decided that they aren’t willing to part with so many cases. Perhaps more importantly, we’re trying to place all wines in a “style matrix”: New World wines with Old World wines, full-bodied and powerful against lighter-bodied, softer wines.

Do all the planes have the same wines at the same time, or do you put certain wines on certain routes? What strategy is there, if any, for determining what wines end up on what routes?
Most international flights carry the same wines at the same time, but we typically change the wine selections every two or three months (depends upon the class of service, and the velocity of the wines). We also have changing wine selections on domestic flights (First Class) and PS flights (in Business Class) and will at times offer wines that are selected for their routing: Chianti into Italy, Shiraz into Australia, Malbec into South America and such.

Do you select all the wines, or just those for business and first class?
I participate in and help guide the process of selection of all wines aboard United flights.

How do you decide (or do you) which wines end up in first class vs. which ones are in business class?
Price is of course part of the selection and categorization of the wines we board. We also try to be smart about matching wines to the class of service. For instance, we see First Class International wine selections as requiring a classic structure and provenance. Business Class passengers may be willing to try less familiar wines, so we have boarded Albarino, Chianti, Ribera del Duero and the like in Business Class; we haven’t yet done so in First Class.

I have the impression that the quality of wines available on US Domestic flights has gone down significantly in the last 10 years. Do you think that’s true? If so, is it just another symptom of the cost cutting we’re seeing everywhere, or something else?
I’d have to repeat what I wrote before [editor’s note: I submitted this claim to Frost in our private correspondence leading up to this interview] : I would respectfully disagree. I have greater leeway in pricing than I did when I began, and there are more interesting wines available now than a few years back, when I was less adventurous in the selection process. I think that consumers are far more savvy today than they were five years ago, and we’re trying to keep up with them. I believe that we have done so but it’s a challenge to stay in front of trends and prejudices.

What’s the hardest thing about being the wine buyer/director for an airline?
Our biggest challenge is logistics: we ship and board wine in many ports around the world: Japan, England, Argentina, Australia, many cities in the US and Europe. Trying to change the wines on a standard time frame in all those cities is a trip. Further because of these logistical challenges, we are selecting wines to be boarded sometimes as much as a year later. We have to be very smart about the appropriateness and the stability of those wines.

What other questions would you have?