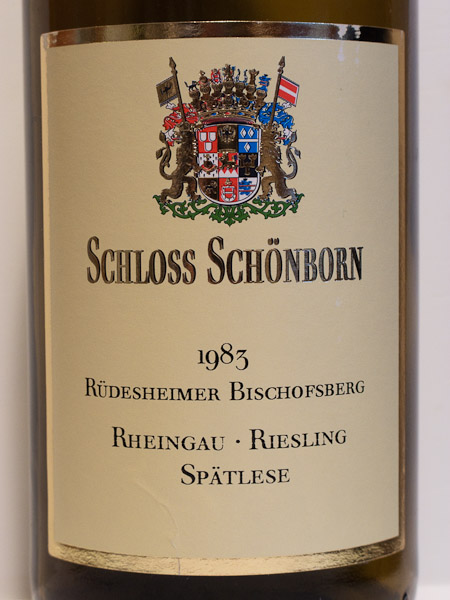 Wine is the closest we come to alchemy. And ironically, the most magical transmutation that takes place within wine is almost entirely out of our control.

Far be it for me to deny winemakers their due for what is surely the magical feat of assisting in the transformation of simple grapes into fluids that evoke things as exotic as mangos, lavender, chocolate, and wood smoke. But at least half of the magic in wine comes from what happens to it when we stop messing with it and leave it to its own devices for a decade or two.

Aged Riesling, in particular, is a remarkable phenomenon. While most Riesling can age exceptionally well, the sweeter bottlings, like other legendary dessert wines with excellent acidity, can age for many decades. Over time, good Riesling can often get darker and darker in color. As it heads towards amber, a remarkable transmutation of flavors and aromas begins to occur. Aromas of wet stone, citrus zest, and lychee can be replaced with paraffin, old parchment, petrol, and dried herbs. The flavors can undergo an equally stunning shift, moving from sweet pear and citrus to a whole range of flavors including herbal and savory notes as the sweetness of the wine fades a bit. I also find that over time, my favorite Rieslings begin to accentuate their minerality, with the best bottlings offering a liberal dose of liquid stone in addition to whatever other heavenly flavors they proffer.

Which brings me to this bottle, which I was lucky enough to get my hands on a year or two ago, and which I opened on my anniversary after Ruth said she wanted a fantastic white wine. It did not disappoint.

Schloss Schonborn is one of the world’s more ancient wine estates. Established in the Rhine valley in the year 1349, it has been owned continuously by the Schonborn family since then, as have many of its vineyard holdings. It might be easy to breeze by that year “1349” without thinking too much about it, but stop and realize: America hadn’t been discovered; glass wine bottles hadn’t been invented yet, and neither had eyeglasses; paintings didn’t include mathematical perspective; and so on.

The Schonborn family in their modern incarnation are a dynasty of industrialists, but they have long been German royalty, the title of Count von Schonborn having been passed from father to son for more than five centuries. Johann Philipp von Schonborn was a bishop in the Catholic church in the 17th Century, an the family has long had ties to the church.

The Schonborn family now owns wine estates in several places in Germany, as well as Portugal, but the heart of the family’s holdings have always been their vineyards in the Rhinegau region, the original home of Riesling. These steep, south facing vineyards are some of the most legendary in the region, with names like Hattenheimer Pfaffenberg, Erbacher Marcobrunn, Rudesheimer Berg Schlossberg, Domdechaney Stein Steilweg, and Hochheimer Holle having graced bottles of Riesling for more than a century.

Domänenweingut Schloss Schonborn (Schloss simply means or “manor” or “castle”) makes a number of single vineyard wines, as well as lesser blended wines each year. The only nod towards modernity they have made in several hundred years is the addition of stainless steel tanks.

The 1983 vintage in Europe suffered from the long shadow of the 1982 Bordeaux vintage, but in Germany and Austria, it was a fantastic, picture perfect growing season and harvest. Indeed, 1983 is regarded as one of the top years of the century for German wine, alongside 1990,1953, 1951, etc.

Well-aged Riesling is hard to come by unless you age it yourself, as most people drink it quite young. Have a bottle like this, however, and you’ll be tempted to lay some down for decades, or snap up the occasional offering released from the library of the winery, which is how I got my hands on this one.

Tasting Notes:
his wine is a bright, very intense yellow gold in the glass, and at the risk of starting this note off in a way that prevents you from finishing it, the color is not dissimilar to a color you’ve all seen a few hours after eating your multi-vitamins. But let’s get past this fluorescent yellow, shall we? Put it up to your nose and revel in lemon zest, candied orange peel, wet leaves, and something that comes across like a broth made out of gasoline and saffron. In the mouth the wine is quite simply mind-blowing. The texture on the tongue is utterly silky, and has an odd dichotomy of both feeling weighty and viscous, while at the same time seeming to float above the palate. The flavors have a crystalline quality to them. Candied lemon peel, wet chalkboard, lemon zest, and paraffin all swirl and shift in a northern-lights display of vibrancy in the mouth. Perfectly balanced, with bright acidity and a stoniness that lingers through a long finish. My notebook has four letters circled several times: OMFG. 9.5% alcohol.

Food Pairing:
With wines this transcendent, you don’t particularly need food, but this wine was a phenomenal pairing with a sous vide and roasted chicken dish.

Overall Score: around a perfect 10

This wine is unfortunately not available anywhere for sale, but if you search you can find some older vintages from this estate available for purchase on the Internet.