Wine From the Caldera: The Incredible Viticulture of Santorini 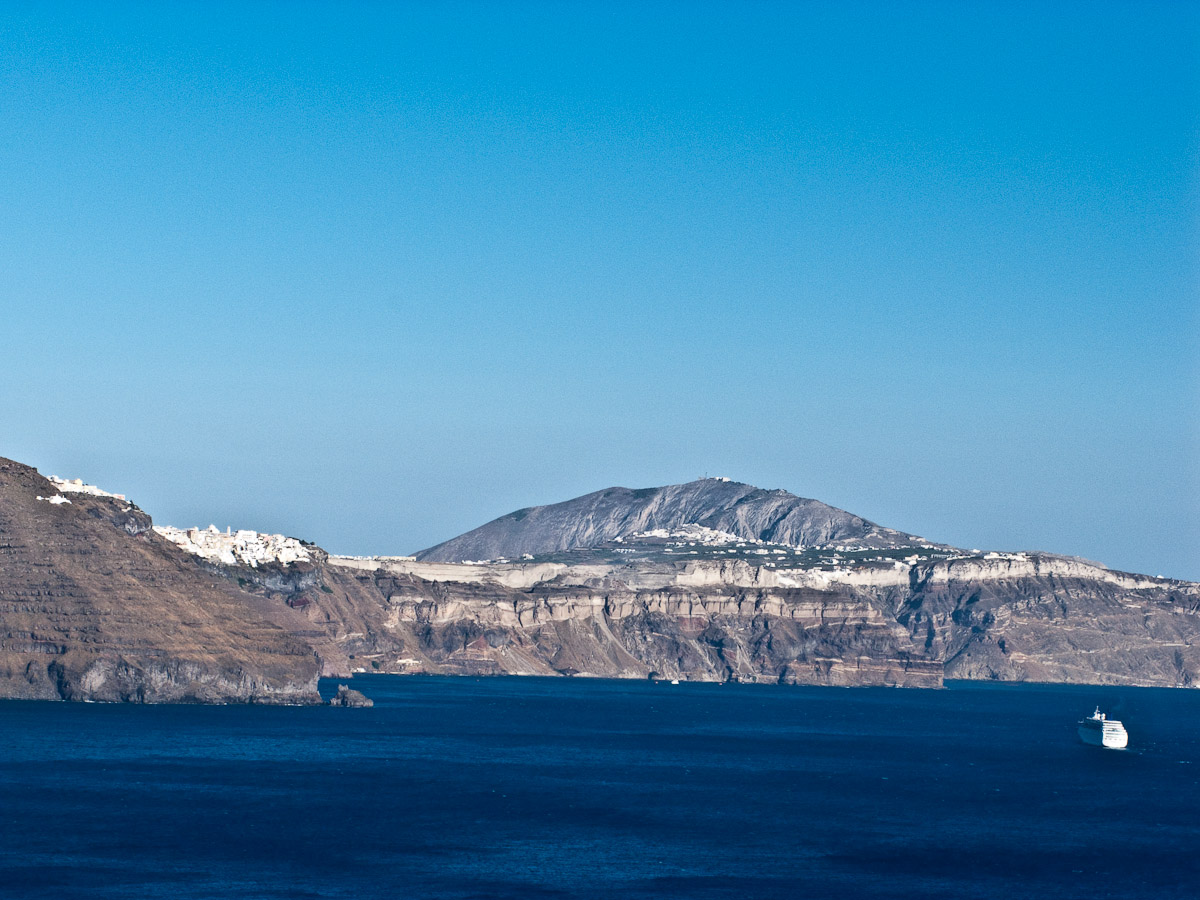 Around 1600 BCE, the 15th Egyptian dynasty was in full swing at Thebes, the Minoans ruled the seas of the Mediterranean, and the beginnings of the Mycenaean civilization — the culture that would become the great state of Greece — was stirring on the Peloponnese peninsula.

To the south of modern-day Greece, in the midst of the Aegean sea, a small Minoan society that had long thrived on the shores of a volcanic island were fleeing for their lives. The mountain which had sheltered them for many centuries was clearly a friend no longer.

Nearly everyone fled in boats, leaving behind their villages, with their nets drying on the piers, goats in their pens, and scraggily grapevines adapted to the hot, windy slopes of the island, as the volcano shook and belched smoke.

The subsequent eruption that these people witnessed (the few who got far enough away to survive and see it) was second in size only to the more famous Krakatoa, its destructive power nearly incomprehensible, even to modern sensibilities. What was before the eruption a vaguely cone-shaped round island, afterwards was nothing more than a hole in the ocean, all but the very edges of a smoking black caldera completely obliterated and sunken 1300 feet into the sea. The ring shaped rim of the caldera that did survive was covered in some places with 150 feet of ash and volcanic stones, as new lava oozed up from the massive hole in the ocean that once was the island.

The eruption created a tsunami wave estimated to be between 115 and 490 feet in height that is known to have devastated the Minoan cities on the island of Crete, and according to some, may have been the source of the destruction of the city of Atlantis, if it actually existed.

The few Minoan survivors fled in terror, never to return, even as rocks and ash rained down thousands of kilometers away. Within a few decades, the Minoan civilization had ended, though experts are divided on just how much the eruption and subsequent tsunami hastened that end. 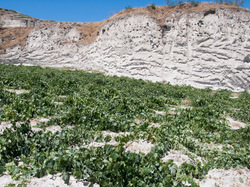 Several centuries later, however, some intrepid Mycenean settlers found their way to the island and made a go of living there again, establishing a small port on the barren slopes of the caldera.

As they explored the desert-like crescent with its steep cliffs, they found living survivors of the blast: grapevines, that against all odds, were eking out a continued existence amidst the volcanic soils. Despite the near total lack of rainfall, and harsh winds that buffet the island for many months, the vines and their root systems were able to pull enough captured moisture and minerals from the ash and porous volcanic rock to survive.

Over the next thousand years, island residents doggedly nurtured these grapes, learning how to cultivate them in some of the harshest grape growing conditions on the planet.

By the time the Venetians were busy establishing their dominance of the Mediterranean around the first millennium of the Common Era, and had gotten around to naming the island Santorini after the Saint Irene, those scraggily grape vines had changed the fate of this small island forever. Other than providing a strategic trading port of call in the midst of the Agean sea, the island’s primary product and reason for existence was its wine, a dark amber colored sweet wine that the Venetians and the rest of the Mediterranean world would refer to as Vinsanto.

Vinsanto (which inspired the name of the much more recently developed Vin Santo of Tuscany) not only made Santorini famous, it made the island and the Venetians who controlled it quite rich. Much like its more modern cousins Constantia and Tokaji, Vinsanto was among the most famous of the world’s wines for several centuries, gracing the lips of monarchs, popes, and the ultra-rich of the ancient world.

Thanks to this history, Santorini today boasts one of the longest continuous histories of wine grape cultivation in the known world. What’s more, little has changed in how grapes are grown on the island for thousands of years, thanks to the extremely inhospitable climate of the island and the relatively remote nature of the island’s small population.

Santorini vineyards are quite unlike any vineyards elsewhere in the world. For starters, they hardly look like vineyards, at least to anyone expecting the orderly styles of cultivation found in most of the world’s wine regions.

When leafed, most vineyards in Santorini look like overgrown, abandoned lots, with 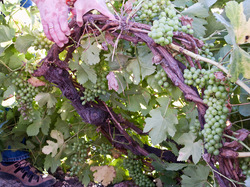 scraggily, serpentine vines sprawling on the ground in lumps and wavy scraggles of leaves. To the truly casual observer, the vines are fairly indistinguishable from weeds.

Yet the apparent disorder of these ground hugging vines belie a very sophisticated system of viticulture that has been perfected over centuries.

To protect the vines and their fruit from the brutal winds, no trellises are used. Instead the grapevines grow directly on the pulverized pumice, basalt, sand, and ash that make up the completely infertile soil of the desert island. To further protect the fruit, winegrowers use a particularly unique method of training the vines into a koulura, a coil of vines that sits directly on the ground and over time comes to resemble a basket.

Along the edges of this coil, which provides a natural wind break and a concentration of shady leaves that protect against the harsh sunlight, the grape bunches grow, their yields naturally restricted by both the extreme conditions as well as the lengthy spirals of the basket.

The vineyards of Santorini are unique not just for their training and appearance. As a result of the soils and the remoteness of the island, phylloxera has never and will never take hold. Every vine on the island grows on its own roots, and most are established from the simplest method of vine propagation: taking the tip of a vine runner and plunging it into the soil, where it will eventually grow roots and sprout into a separate vine that can eventually be cut off from the mother vine.

No irrigation is, or has ever been used on the vineyards. Water is quite precious on the island, and far too precious to waste on thirsty vines. The grapes must get their moisture the same way that all the other sparse vegetation on the island does — by sucking it out 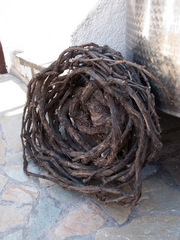 of the air and the ground. But that still means precious little moisture. The dominant source of water tends to be the sea mists that drift across the island at night to be sucked up by the porous pumice stones and thirsty leaves.

Most of the vines on the island bear the indigenous white grape varieties of Santorini, dominated by Assyrtiko (ah-SEER-tee-koh), with lesser amounts of Athiri (ah-THEER-ee) and Aidani (eye-DAHN-ee). A few red varieties are also grown, the vast majority of which are Mavrotragano (mah-vroh-TRAH-gah-no) and Mandilaria (mahn-dee-LAH-ree-ah).

Perhaps the single most amazing aspect of Santorini viticulture, has to do with the age of the oldest vineyard plots on the island. Many of them contain grapevines that are between 200 and 500 years old.

As the baskets develop and grow thicker, with year after year of growth added to them, eventually the grapes are growing many meters from the trunk of the vine, which must push nutrients and moisture along the coil of the basket to ripen the grapes. As you might imagine, this means yields eventually become quite miniscule. Consequently, about every 75 to 85 years, the grape growers on the island have a habit of cutting off the baskets, leaving the stump of the vine to generate new shoots from a simple gnarled thumb sticking out of the ground. These shoots are then wound into the beginning of the basket, and the process begins all over again.

In many vineyards on the island, families have records showing four or five such prunings over their family history, and those vines are still producing today, their baskets thick as a man’s wrist.

Families are the main farmers (and owners — most wineries on the island have very few, if any, holdings) of vineyards on the island, at least for now. The average age of a vineyard owner is around 65, according to one winemaker on the island, and there doesn’t seem to be a younger generation eager to step in and become farmers. The vineyards are mostly contracted to one or more of the 10 working wineries on the island, much as we are used to in other wine regions around the world, with the exception that usually it is the family and friends of the owners that do the harvesting, as no one else really knows how to do it.

The average vineyard plot on the island is a mere 1.3 hectares, or about 3 acres, and there are approximately 1000 different growers on the island. Vineyards are divided up in a tiny patchwork not so dissimilar to Burgundy, with its historical family farming of tiny adjacent plots, and crazy politics between growers. Vineyards rarely ever change hands, and new plantings are fairly unheard of, especially as they have to compete with the ever expanding development of resort and tourist infrastructure on the island.

I spent four days last week on a press trip visiting every winery on Santorini, and tasting most of the wines made there, and it was a truly remarkable experience. The landscape, the vineyards, and the wines they make are all unbelievably unique and compelling. And the best wines are really, really good, somehow managing to match the incredible beauty of the place itself. 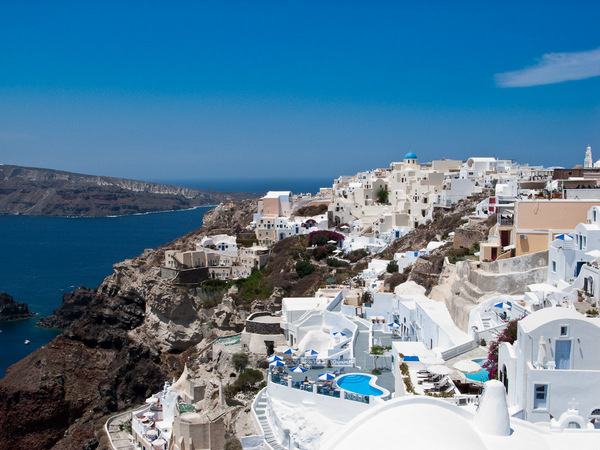 Stay tuned for reviews of the island’s wineries and their wines in the coming days.