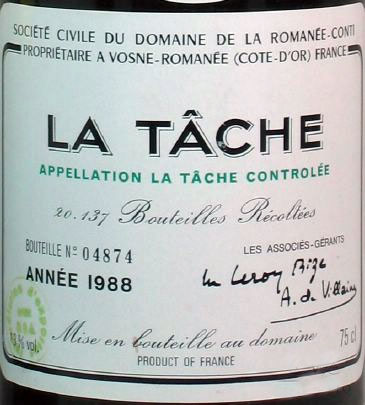 You don’t get very far in a journey towards being a wine lover without hearing the words “Romanée-Conti” spoken with some combination of reverence and amazement. And in today’s world of Asian fueled wine-auction speculation, even those with casual interest in wine have heard of this famous domaine. Equally referred to as both the best wines in the world and the most expensive, the wines produced by the small Domaine de la Romanée-Conti are inarguably some of the most revered and sought after wines in the world.

Their price and scarcity mean that many wine lovers with modest means may never taste these wines. Indeed, I would be surprised if I ever owned a bottle myself. My only tastes of these wines to date, and likely for the foreseeable future, have come at the hands of generous friends and strangers. Such friends, as they say, are good to have.

DRC, as it is affectionately known, has been synonymous with the pinnacle of Burgundy for a long time. Its history, or more accurately, the history of its two most famous vineyards, La Tache and La Romanée-Conti, go back to the 13th century. In 1232 in the little town of Vosne, the Abbey of St. Vivant bought about four acres of Pinot Noir vineyard. The monks quietly made their wine for the next 400 years, until, for reasons unknown, the vineyard was sold to de Croonembourg family, who, for equally obscure reasons, renamed it La Romanée. At the same time, this family acquired the already well known neighboring vineyard named La Tache, whose name translates to “the spot” or “the stain.”

These two vineyards were sold again in 1760, and famously prompted a bidding war between two lifelong rivals: Madame de Pompadour, the well known mistress of King Louis XV of France, and Louis François Ier de Bourbon, also known as the Prince de Conti. You can guess who won.

After paying what was, at the time, an astronomical price for the winery and its vineyard holdings, the prince appended his own name to the Romanée vineyard, which it still bears today.

The vineyards changed hands several times over the ensuing centuries, and in 1869 the winery and its vineyards were bought by Jacques-Marie Duvault-Blochet, who went on to acquire other Grand Cru vineyard holdings in Échezeaux, Grands Échezeaux and Richebourg, effectively creating the domaine that the world knows today.

The domaine’s vineyard holdings continued to increase over the next 100 years, with the addition of several hectares in Romanée Saint-Vivant and some additional vineyard land adjacent to La Tache that was combined with that vineyard in 1936 to form what is the Grand Cru of La Tache today. La Tache, like the La Romanee-Conti vineyard, is owned in its entirety by DRC, earning the French term monopole.

Since Duvault-Blochet’s assemblage, the domaine has essentially been in the hands of two families and their descendants. The family trees are complicated, but suffice it to say that the two men who run the domaine, Aubert de Villaine and Henri-Frédéric Roche can reasonably say that they represent the present tense of a family ownership that stretches back directly to Duvault-Blochet.

Domaine de la Romanée-Conti farms, as it has for more than 80 years, approximately 62 acres in 7 Grand Cru vineyards, two of which are the aforementioned monopoles. In 2008 the domaine acquired leases for three parcels in the Grand Cru Corton appellation, bringing the number of Grand Cru’s bottled by the domaine to eight.

It is an often bandied about fact that Domaine de la Romanée-Conti practices biodynamics on its vineyards, though there has always been some ambiguity (at least among people I’ve talked with and things that I’ve read) about how committed the domaine was to this practice, and how pervasive it was across its vineyard holdings. So when I got the chance to exchange a few words with Aubert de Villaine at a press conference in Burgundy last year, I asked him about whether the estate was fully Biodynamic and for how long.

His reply: “Ten years. We experimented for seven years, and for the past three we have been fully Biodynamic.”

In addition to using the Biodynamic preparations and farming methods (which includes the use of horse power only in the vineyards), the domaine takes great care in the genetic diversity and heritage of its Pinot Noir vines, propagating the various strains of from the Romanée-Conti vineyard with the idea that it represents the pinnacle of both quality and heritage.

For all the fuss about DRC wines, there’s not a lot of conversation about the winemaker. Officially, it appears to be Aubert de Villaine, but he has lots of help in the cellar. Perhaps it is appropriate that none of these helping hands get billing as the winemaker (a term which Villaine does not actively don himself) given the philosophy that the majority of the winemaking takes place before the grapes are cut from the vine.

Suffice it to say that the winemaking philosophy of the domaine manages to walk the knife edge of doing as little as possible during the process, while sparing no expense in the production. Call it the most expensive primitive winemaking in the world – with specially selected and cured oak barrels of a quality and construction available to no other winery in the world, and nearly everything done by hand in the winery the old fashioned way.

The winery produces approximately 8000 cases of wine per year across its 8 Grand Cru vineyards, every individually numbered and tagged bottle of which is sold through a tightly controlled network of distribution. In recent years, both in the face of growing wine fraud as well as increasing global distribution, the domaine has instituted some of the worlds most sophisticated anti-fraud and inventory tracking technology on the planet, allowing them to essentially keep reasonably close track of every bottle sold, and every time it changes hands in any commercial transaction.

So what else is there for me to say about one of the most talked about wines and wineries in the world? The question always arises whether the wines are worth the money, which is not a question I can answer, other than to say to me it’s a moot point for my level of financial means. I believe in economics enough to point out that the worth of anything in a free market is merely what someone is willing to pay to get it. DRC is a scarce resource that people value at very high prices.

Here’s how I got to taste this wine. I was in a crowded room in Burgundy. Someone walked up to me and thrust a glass into my hands and said, “try this.” I tasted it, and after I opened my eyes back up, I wrote some notes, and asked “what is it?” And then this kind person told me what I had tasted.

When it comes to older vintages of wines, I firmly believe in the adage “there are no great wines, only great bottles,” and this particular bottle was in stellar shape. The 1988 vintage was not heralded as one of the top vintages of the century, though Aubert de Villaine described it as a “powerful” vintage. It certainly had what it takes to make an impression on me.

Are the wines of DRC over-hyped? Probably. Are they among the world’s greatest wines? Assuredly. Was this one of the most remarkable wines I’ve ever had in my mouth? Without a doubt.

Tasting Notes:
Medium garnet in color, and showing none of its age, this wine has a remarkably sweet nose of deep, pure raspberry fruit. In the mouth the wine has a mind-blowing presence on the palate. It’s hard to describe the quality of the wine from a textural standpoint, but I’ll give it my best shot as a combination of serious weight, seamlessness, and utterly sexy silkiness on the tongue. More than any other wine I’ve ever tasted, this is one that I just wanted to roll around in my mouth experiencing the sensation of it colliding with my tongue like a baby wrapped in satin. The flavor profile of the wine moves from burnt sugar, to dried cherry, cedar, and raspberry with lighter notes of dried herbs and spices. Even with the flavors, and the ever-so-faint-tannins, the wine portrays this incredible picture of wholeness — a perfectly spherical bubble of flavor and texture that commands your attention. The wine is clearly quite ripe, but without the characteristics that might make this anything other than a beautiful expression of fruit. Perfectly balanced, the finish is minutes long. My scribbled notes read “H@#$% F@$%@!&* S#$%!*” circled and underlined. 13% alcohol.

Food Pairing:
While Burgundy is famously food friendly, I personally prefer to contemplate a wine like this on its own. I happened to try it with some oven roasted tournedos of beef with szechuan peppercorns, and it was just fine. But really, this is a meditative wine.

Overall Score: pretty much a perfect 10