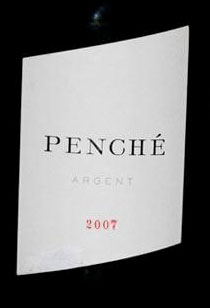 As you might imagine, I get sent a lot of Cabernet from Napa. At first I eagerly anticipated the arrival of every new label that I had never heard of, but over the years, I’ve become a bit jaded, as so many fail to rise above reasonably competent, over-oaked expressions of the grape. These days it’s a lot harder to turn my head with a new Napa Cab, but when they arrived, two dark bottles with simple parallelogram labels did more than turn my head, they rocked me back on my heels.

A successful orthodontist, Scott Asbill eventually picked up the habit of wine drinking and collecting. His passion was infectious for his wife Pauline, and the two made regular pilgrimages to Napa and other areas of California wine country in the early years of their marriage. Eventually they decided they wanted to live in wine country, and began looking for property. Like so many wine lovers with this dream, they imagined the possibility of finding a property with a little vineyard “out back” which they could use to make a little wine for themselves and sell the grapes to someone else, and perhaps defray the cost of their investment.

The Asbills found a picturesque little property that matched the dream they had held in their mind’s eye: four acres of vineyard with a farm house under the shade of a jaunty leaning oak tree. In a word, idyllic. They fell in love with the place and began the slippery slide that so many make, from residents to winegrowers. It’s just something that happens in wine country.

The Asbill’s vineyard sits in the middle of one of the wider points of the Napa valley. Like most of the valley floor in the surrounding Oak Knoll District , the vineyard is mostly alluvial soils and gravel mixes with an intermixing of clay that drains moderately well and does wonders with Cabernet Sauvignon. The Oak Knoll district is far enough south in the valley that it can claim reasonable fog influence from the San Pablo Bay to the south, moderating the heat sink that the valley can often become in the height of summer.

When Asbill decided he wanted to try his hand at wine growing, his first order of business was to rip out the Chardonnay and replant with three different clones of Cabernet Sauvignon. Asbill’s decision to handle the farming and vineyard management himself was made with the sort of perfectionist dedication that he purportedly brought to his work as an orthodontist. With a few classes under his belt, the familiarity with tensioned wires, snipping, and shaping no doubt came naturally to someone whose hands were used to precision work. While Asbill doesn’t do all the vineyard work himself, he checks it obsessively, making finer adjustments throughout the vineyard to match what he describes as a goal of “precision, symmetry, and balance.”

Early on in their ownership of the vineyard, a mealybug warning was issued for the Oak Knoll District, and in what has become an oft-retold anecdote about Asbill, the morning following the warning found him out on his hands and knees with a toothbrush, literally going over every single vine in his four-acre plot looking for larvae.

The Asbills held to their original goal at first, making a little Cabernet in the garage, and then selling their grapes to folks like Pride Mountain Vineyards and Clos du Val. But eventually the fruit seemed too good not to give their own label a try, at least according to winemaker Jay Buoncristiani, who bought some fruit and became friends with Scott and Pauline. A little encouragement from Jay and a little mulling it over from the Asbills, and Penché was born, named after the French term for “leaning” in reference to the beloved oak tree that shades their porch.

With the meticulous work in the vineyard taken care of with the detail that an orthodontist could bring to it, Asbill looked to Buoncristiani for help bringing a similar level of precision to the winemaking. Buoncristiani, most recently of the Hess Collection winery, comes from a family of winemakers and winegrowers, and with his three brothers makes a series of wines bottled under their family name that have recently risen to great acclaim.

Buoncristiani brings to Penché a no-frills, detail-oriented winemaking philosophy. Vineyard blocks are kept separate throughout the winemaking process. After arrival at the winery, the grapes are destemmed and obsessively sorted. The separate lots then go into small bins for an extended maceration up to five weeks long, with regular pump overs and punchdowns. After a gentle pressing, the wines go into oak. After about a year, the lots are blended, and returned to barrel for another six to nine months before being bottled unfined and unfiltered.

The winery produces two wines. The first, named Argent, is a Bordeaux style blend of Cabernet Sauvignon, Cabernet Franc, Merlot, Malbec, and Petite Verdot. While the Cabernet and a tiny bit of the Petite Verdot comes from the Asbill’s estate vineyard, the other grapes are sourced from various select locations around Napa and Carneros. Designed to be a more accessible wine in its earlier years, this nonetheless serious wine is aged for 20 months in 50% new French oak.

The second wine and the brand’s top bottling is their Cabernet Sauvignon. The wine is 89% Cabernet Sauvignon, with the balance coming from the same four Bordeaux varieties that play a larger role in the Argent. It is aged for 20 months in 83% new French oak.

Penché produces 260 cases of Argent and 165 cases of their Cabernet Sauvignon. The first commercially available vintage was 2006 (a tiny bit of 2005 was released), and they have only recently released their second vintage, the 2007.

And so we come to the question that no winery in Napa can escape these days: Does the world really need another $50 or $80 Napa Cabernet? In many ways, the answer to that question is no. Just ask anyone who’s trying to sell a lot of Napa Cabs in that price range and you’ll see them wince as the after effects of the recession still linger hard on that particular category of wine.

But frankly, Napa does need more wines like Penché, and anyone who buys Cabernet in this price range should, too. There’s room for a lot more soul in Napa Cabernet, and the Asbills are doing their valiant part to add some, a few hundred cases at a time, under the careful shade of an old oak tree.

Full disclosure: I received these wines as a press sample.

2006 Penché “Argent” Proprietary Red Wine, Napa Valley
Inky garnet in the glass, this wine smells of rich dark black cherry, roasted figs, and cassis. In the mouth, the wine has an incredibly sexy, velvet texture and smooth, seamless flavors of black cherry, cassis, and chocolate, with hints of espresso and oiled leather. Gorgeously rich, the wine keeps giving for a long time through the finish, and is kept from being heavy by nice acidity. Delicious. 14.8% alcohol. Score: between 9 and 9.5. Cost: $48. Click to buy.

2006 Penché Cabernet Sauvignon, Oak Knoll District, Napa
Very dark garnet in the glass, this wine smells of cherry and chocolate. In the mouth, the wine is nicely textured while also brawny and muscular. Cherry, chocolate, espresso and cedar flavors are layered on top of an earthy bass note. Grippy tannins and nice acidity make for a dynamic mouthful, and tastefully restrained oak mean this wine is more about rich fruit than wood. Quite nicely done. 14.8% alcohol. Score: between 9 and 9.5. Cost: $70. Click to buy.

2007 Penché “Argent” Proprietary Red Wine, Napa Valley
Very dark garnet in color, this wine smells of cherry and chocolate. In the mouth lush, velvety tannins wrap around a core of cherry, cola, and cocoa powder flavors that richly coat the palate. Notes of cedar and wet dirt emerge on the finish. Nice acidity keeps this wine balanced as it struts its prize fighter physique through the finish. Lovely. 14.8% alcohol. Score: around 9.5. Cost: $48. Click to buy.

2007 Penché Cabernet Sauvignon, Oak Knoll District, Napa
Dark garnet in the glass, this wine smells of wet dirt and dark cherry fruit. In the mouth rich flavors of black cherry black olive, wet dirt and cocoa powder swirl under a blanket of powdery, mouth coating tannins. Rich flavors of cedar and wet dirt linger though the long finish that has a hint of savory black olive to it. Gorgeous and restrained, without a trace of sweet oak, this is a very impressive wine. 14.8% alcohol. Score: around 9.5. Cost: $70. Click to buy.