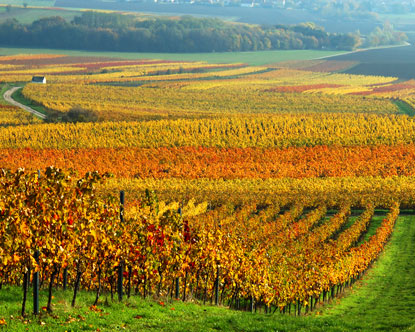 In several places in the Southern German wine regions of Pfalz and Württemberg, thieves have been making off with hundreds of thousands of Euros worth of perfectly ripe grapes, in some cases hours before they were supposed to be harvested.

Theft of wine grapes, while uncommon, is not the rarest of crimes. I wrote about the theft of some top quality red wine grapes from Washington State last year.

But the thefts in Germany are on a relatively unprecedented scale, and as of yet, according to the Washington Post, police have no leads in any of the cases.

The fact that in some cases these heists have been performed in the middle of the night with harvesting machines suggests to me one of two likely suspects: organized crime or fellow winemakers. Or perhaps both combined.

The idea of vignerons robbing each other of their harvest leaves a particularly disgusting taste in the mouth, but the threat of being unable to feed your family can sometimes lead to desperation. Some parts of Germany were hit by devastating frosts this past May. They were so bad in Württemberg that they wiped out some winegrowers entirely, and many are expected to declare bankruptcy as a result. The fact that this region is among the heaviest hit by these thefts hardly seems a coincidence.

Having your grapes stolen hours or days before harvest must be truly heart-breaking. With so much effort and care put into them, and so much of the year’s financial outlook resting on what you do with them, it’s hard to imagine how it would feel to walk out one morning and see it all gone.

It’s enough to make you want to camp out in your vineyards with a shotgun, or take some lessons in booby trapping from the remote marijuana growers or cocoa growers of the world.

Here’s hoping they catch these dastardly crooks soon, break their knuckles, and force-feed them the cheapest wine they can find.