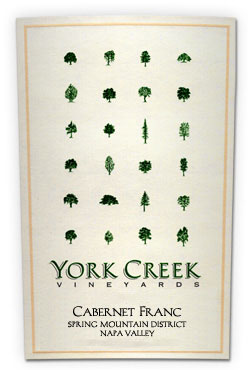 One of the most gratifying experiences I have as a wine lover and very, very small time wine collector involves pulling a dusty bottle off the shelf from where it has slumbered for years, and popping it open to find an utterly fantastic wine. I don’t own a lot of wine, and I have even fewer bottles that I’ve been deliberately aging long enough for them to be mature, so this experience isn’t a regular occurrence for me, but when it happens, it engenders nothing short of joy.

I think it was 2003 when I bought a couple of bottles of 2001 York Creek Vineyards Cabernet Franc. I drank one the next year, and it was one of the earlier wine reviews I did on Vinography. If you want a peek at (a slightly embarrassing and amateur) earlier review, you can check it out here.

My second bottle sat on a shelf until Monday night, when I had a nice dinner with five close friends, and I decided it was time to drink it.

The York Creek property is one of the largest and most beautiful parcels of land on the crest of Napa’s Spring Mountain. One hundred twenty-five acres of vineyards are surrounded by another 575 acres of woods and orchards, hosting 24 varieties of native trees whose silhouettes make an appearance on the York Creek wine label. The property mirrors the variety of trees in its vineyard plantings of over 14 different varietals including Cabernet Sauvignon, Petite Sirah, Zinfandel, Petit Verdot, Cabernet Franc, Pinot Blanc, Carignane, Alicante Bouschet, and Touriga Nacional.

York Creek has been owned since 1968 by Fritz Maytag who purchased the property around the same time he purchased the Anchor Steam Brewing Company here in San Francisco. He always meant to make his own wine there, it just took him a while to get around to it — about 32 years, to be exact.

Maytag is the prodigal son of the Maytag family who decided that he needed to do something instead of appliances or blue cheese with his life. Not that his family ever had any intention of just letting him run the family business. Maytag was encouraged to find his own way in the world without a sense of entitlement. That way included a stint at Stanford as well as a lot of hanging around in the North Beach neighborhood of San Francisco, until the day in 1965 when he fell in love with the Anchor Brewing Company, and decided to save it from going out of business by buying a controlling interest “for the price of a used car.”

Maytag took to brewing like a fish to water, and in the subsequent decades, he has become the Midas of the beverage world. His beer is world-renown and best-selling; his experiments in whiskey and gin have become quick successes. Maytag is a dabbler, a beverage renaissance man if you like, that seems to get it right. From home grown olive oil, to home grown apple brandy, to grappa and port, and now his own wine, Maytag wouldn’t have seemed out of place in the turn of the century village market where farmers eked out an existence from every asset the land provided.

Maytag initially started his winemaking operations in the early Nineties for fun and with the encouragement of his neighbor and friend Cathy Corison, owner and proprietress of Corison Vineyards. In 2000 he moved his operations to a specially designed (by him, of course) winery building across the street from his brewery and made his first commercial vintages. There he continues to serve as winemaker, though now with some help from Tom Holmes, formerly one of the brewers at Anchor Steam who trained as an enologist.

York Creek Vineyards makes a number of excellent wines that I have tasted repeatedly over the years. They are distinctive, well made, unpretentious and often good values. Some of the wines also express what I take to be Maytag’s adventurous spirit for experimentation, including one of the better rosés made in California out of the Portuguese grape Touriga Nacional.

But back to this bottle of Cabernet Franc. York Creek Vineyards has had plantings of Cabernet Franc since Maytag acquired it, but it had always been blended into other wines, mostly the estate red blend. But in 2000 the fruit was so good Maytag decided to bottle it by itself. He has done so ever since, with excellent results.

A lot of people think that only the big expensive wines with major tannins and heavy bottles are the ones that you can age for a decade or more. But this is a fallacy that denies a lot of wine lovers with modest cellars experiences like the one I had this week. I know this because some of the first wines that I started to store for a long time were wines like this — $30 reds that I liked right out of the gate but wanted to see how they would last.

This second vintage of Maytag’s Cabernet Franc was very good upon release. Now, eleven years later, the word sublime would not be an exaggeration. What time wrought with this modest bottle of wine was nothing short of a masterpiece.

While opening a great bottle after years of patient aging is one of a wine lover’s greatest pleasures, it can also be bittersweet. You know you’ve got a good thing in your glass when you want to smack yourself upside the head for not buying two cases instead of two bottles.

Such is life. I guess I’ve got to go find some of the current vintage and then wait a few more years.

Tasting Notes:
Medium ruby in the glass, with very little sign of age in its color, this wine had a gorgeously perfumed nose of dried cherries, dried flowers, chocolate, and the barest hint of sweet anise. In the mouth the wine was sex and velvet, with gorgeously faint, powdery tannins that provided a bed upon which cherry, chocolate, cinnamon, and roasted fig flavors lounged like concubines in a harem. Excellent acidity meant for a juiciness that was fairly unexpected, and the wine’s very long finish was suffused with remarkable aromatic sweetness. The wine was not sweet, but yet the fruit took on this gorgeous ripe sweetness as flavors lingered in the mouth that was breathtaking. Truly a stunning wine and a great surprise after 11 years. 133 cases made.

Food Pairing:
I had this wine with beef short ribs and a chantrelle risotto, both of which appreciated the wine. But honestly? I just wanted to sit and alternate between sipping and gulping this wine.

Remarkably, there seems to be at least one store online that has a few bottles of this wine. find it on the Internet.