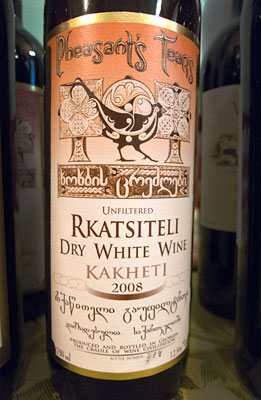 We don’t know exactly where and when mankind first made wine in any significant quantity, but we believe that it was approximately 8000 years ago — long before the rise of the Egyptian civilization. We’re also fairly sure that these initial efforts to produce large quantities of fermented grape juice took place in the region currently occupied by the Republic of Georgia. These estimates of the time and location of mankind’s earliest forays into oenology are based on the carbon dating of grape seeds found in the bottom of ancient clay amphorae, the remarkable progenitors of the world of wine and winemaking as we know it today.

Those grape seeds are genetically identical to the seeds that you will find at the bottom of clay amphorae buried behind almost every rural house in the country of Georgia, just as the amphorae, and the winemaking methods that utilize them also remain essentially unchanged across eight millennia. Georgia is the land that time forgot, at least when it comes to winemaking. For eight thousand years, the humble families of this region, through the rise and fall of empires and invasions, have made wine because a life without wine is no life at all.

This is not some romantic or philosophical ideal. Most people don’t buy wine from a store, they make it themselves. The twenty or so commercial wineries that exist in Georgia exist only because of international (for a long time, international merely meant: Russian) demand for Georgian wine.

But even if the country had not a single commercial winery, it would be one of the world’s most vibrant wine cultures. Everyone literally makes their own wine. Larger towns have farmer’s markets dedicated only to selling grapes, which are purchased by anyone lacking vineyards. The grapes are carted away to make wine according to a recipe that is so ingrained in the Georgian culture that most children could easily tell you how it is done.

Ironically, the Georgian method of making wine without changing has gone from being ancient history to being cutting edge. Some of the world’s most innovative and risk-taking winemakers now make wine the Georgian way: harvesting grapes; throwing crushed whole bunches of grapes into giant clay pots lined with beeswax and buried in the ground; then sealing them up for six to eight months; and then returning to remove the skins and seeds and stems before sealing the clay vessels again for one to eight years. While the rest of the world calls this radical, risky, “natural” winemaking, the Georgians know it as simply the way that wine has been made since time began.

Perhaps a sense of being lost in time was what a young artist named John Wurdeman was looking for when he finally made his way to Georgia. Trained as a painter at the Maryland Institute, College of Art in Baltimore, John felt that the kind of painting he wanted to do couldn’t be done in the U.S. So he went looking for the place that was right, eventually making his way to Moscow where he finished his MFA at the Surikov Institute of Art. But Moscow wasn’t quite right either. So John kept looking until, in 2005, he found himself sitting in a vineyard in the Republic of Georgia, and everything seemed to be perfect.

And then a stranger on a tractor yelled at him to come have dinner.

We all reach points in our lives where once we have passed over a threshold, it is impossible to go back to the life we had before that fateful step. For Wurdeman, that passing dinner invitation represented the beginning of a love affair with the Republic of Georgia that quickly turned into owning a vineyard, and as Russia clamped a trade embargo on the region, the daring plan to sell Georgian wine in the United States.

The man on the tractor was Gela Patalishvili, who is now the winemaker for a winery the two formed together called Pheasant’s Tears. This small winery is now leading the way for the relatively fledgling commercial wine industry in Georgia to look beyond Russia as a market for its wines.

The time may, in fact, be right for Georgian wine to gain wider attention. Aside from being the cradle of winemaking, its wines and winemaking techniques have inspired some of the most iconoclastic winemakers of today, most notably the italian Josko Gravner, whose visit to Georgia led to his adoption of amphorae and the extended maceration of white grapes that yield what is gradually becoming accepted as a fourth color (after red, white, and pink) of wine: orange.

Gravner and his disciples, along with others like Paulo Bea have been popularizing (at least among a subset of wine lovers like myself) orange wines over the past decade. There’s a (fantastic) wine bar and restaurant in New York now called Amphora that always has at least one orange wine served by the glass and several more on its wine list. Some restaurants, including San Francisco’s Barbacco, now dedicate an entire section of their wine lists to orange wines.

The Georgians don’t use the term orange wine, of course. Wine is just wine. It comes in two varieties. Light and dark (or “black” and “white” as their terms would have it). Black wine is usually made from the grape Saperavi (sah-per-aah-vee), while white wine is usually made from Rkatsiteli (rih-kaht-sih-tell-ee). But these are only two of the roughly 500 different kinds of indigenous grapes that can be found in Georgia (of which about 120 are used to make wine, some often unique to a specific village).

This particular wine is made from the Rkatsiteli grape, which is crushed, often as a full cluster, and slopped into the wax-lined clay vessels known as qvevri (kweh-vree). These vessels, whose name in Georgian simply means “beneath the earth” are often called amphorae by the rest of the world, but the Georgians insist that they are not the same thing. Buried in the ground, qvevri promote a long, steady, fermentation, and their egg-like shape promotes the natural mixing of the skins and lees with the wine.

After about six months, the wine is painstakingly removed from the qvevri with a ladle, drained off from the solids (stems, seeds, skins) and returned to the qvevri. If the winery were the kind of backyard outfit that most Georgians seem to possess, the wine would just sit there until it was time for a supra, or feast. At which point the qvevri would be opened up, wine ladled out and served. As this is a commercial bottling, the wine is removed after some further time (I’m not entirely sure of the duration) and bottled in glass. Note that this process involves no added yeast, no filtration, and no fining. Just grapes and a qvevri.

For anyone who has yet to try an orange wine, this is as good a place to start as any, and the price is right. While not as complex as some of the efforts produced by Gravner and others, it is delicious and possesses all the wonderful qualities that led me to fall in love with orange wines the moment I had my first — exotic aromas, mysterious tannins, and wonderful abilities to complement food.

You’ll have to be the judge as to whether it lives up to the winery’s namesake — the wine that was so good it could make a pheasant cry.

Tasting Notes:
Earning its local nickname as “fire wine” this bright, nearly neon orange glass smells of exotic flowers, candle wax, candied apricots and just a hint of tomato. In the mouth the wine has a wonderful creaminess that is offset by somewhat stiff tannins and bright acidity. That creaminess leans towards a waxiness as flavors of orange peel, fresh ripe apricots, and exotic spices swirl in a beautifully textured concerto. The finish is long and features that waxy quality along with floral notes and the grip of tannins. Excellent, and exotic. Will benefit from decanting. 12.5% alcohol.