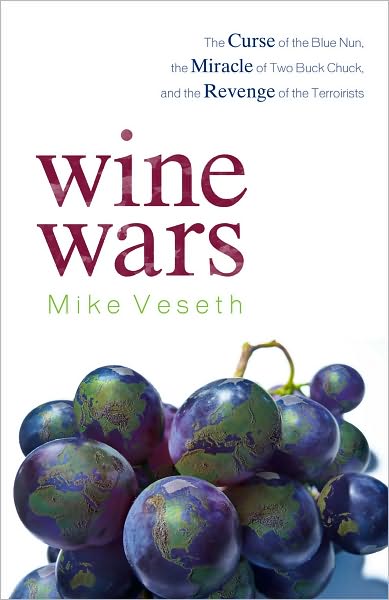 Worrying about wine as a commodity seems uninspiring, even tawdry, compared, say, to worrying about the distinctive terroir of some patch of dirt in Alsace. But without the buying and selling, we’d all be home winemakers, wine production would still be primitive at best, none of us would ever have heard of Argentine Malbec, and that special spot in Alsace wouldn’t have its own Facebook page. Money makes the wine go round, and Wine Wars helps to make sense of it all.

Veseth teaches political economy at the University of Puget Sound, is active in the American Association of Wine Economists, and writes the Wine Economist blog. The book’s central metaphor is the “wine wall”–the complicated, diverse array of regions, grapes, brands and price points that can be found at most any wine shop or supermarket. Shelf by shelf, Veseth decodes the logic of what’s where on the wine wall and how it got there. The book’s subtitle–The Curse of the Blue Nun, The Miracle of Two Buck Chuck, and the Revenge of the Terroirists–highlights three dynamics threaded through the story: the bad old days of cheap, insipid, industrial wine (Blue Nun, a wildly popular parody of good German Riesling a few decades back); the much better days of modern, efficient, technologically advanced, global winemaking (Two Buck Chuck); and the militant defense of fine, terroir-driven wine by another whole tier of producers around the world.

Not to spoil the end of the story, but Veseth remains hopeful in the end about the mix of wine dynamics. Despite the seemingly crushing power of global price-cutting and homogenization, he thinks distinctive, even quirky wines have a bright future–in other words, something for everybody.

Along the way, his overview of economic forces that have shaped wine’s career take the reader on a number of historical excursions and international visits. We learn about the German discount wine juggernaut behind the “surfer dude” cosmetics of the Trader Joe’s chain, the convoluted, multi-century relationships between French winegrowers and British drinkers, the marketing logic behind how Costco arranges its shelves and bins, and the rise of Hong Kong as the center of world wine auctioneering. The treatment is breezy and easygoing; not only are there no intricate economic formulas, there is not one single table or graph between the covers.

Nonetheless, Veseth does get to some fundamental economic realities behind the surface of wine, and even readers who pay attention to the ups and down of the wine market will learn something. For example, most wine fans know that the emergence of New Zealand as a high-profile player in the international wine trade is a very recent development, maybe two decades old, seemingly out of nowhere. More studious geeks know that the years of New Zealand’s obscurity were also years when the main grape varieties grown were French-American hybrids, thought to be more suitable to cooler climates but not likely to make any export waves. That reliance of non-competitive grapes might seem to be the prime reason for decades of international non-competition.

What Veseth adds to the picture is that for many years, New Zealand followed an official policy–known as import substitution–of encouraging domestic production by creating barriers to foreign imports. In the case of wine, this meant that backward production practices and grape choices had a free ride, and no incentive existed for joining join the modern wine world. When New Zealand dumped the import substitution strategy and opened the doors to trade in and out, New Zealand winegrowers suddenly discovered they could grow amazing Sauvignon Blanc and Pinot Noir, and the rest is drinking history.

This kind of information may not change the way your next glass of Marlborough Sauvignon Blanc tastes, but it surely will help you understand how it got there. And that, to go back to wine’s many wondrous properties, gets us back to the lure of enlightenment.

Mike Veseth Wine Wars: The Curse of the Blue Nun, The Miracle of Two Buck Chuck, and the Revenge of the Terroirists, Rowman and Littlefield 2011, $24.95 (hardback).